You are in : All News > “Wooden elephants”: Is the baobab tree ready to bloom into the superfruit trend?

“Wooden elephants”: Is the baobab tree ready to bloom into the superfruit trend?

10 Jul 2019 --- Baobab arguably falls into the trendy “superfruit” category, with the fruit pulp containing 50 percent fiber, as well as minerals such as potassium, calcium and magnesium. The fruit also offers up to ten times more vitamin C than oranges, and has more antioxidant activity than other so-called superfruits like mango, pomegranate and kiwi, according to Nexira, a baobab pulp powder producer. However, the fruit is yet to reach full-on “trend” status, but it is featuring in a promising level of NPD.

The baobab, often dubbed “Africa’s tree of life,” can live for over a millennium and has long been part of local customs across the continent. It is now finding a new audience in Western cultures, where it is being touted as having a low-GI status and prebiotic benefits. The fruit’s health halo stretches from Type 2 diabetes management to sports nutrition potential. Studies have highlighted the potential of baobab for blood sugar control in people with Type 2 diabetes, while a University of North Carolina study identified baobab’s potential for use in sports nutrition due to its high vitamin C content.

Such a strong nutritional profile is common among a group of fruits dubbed “superfruits” – a trendy buzzword used to denote any fruits generally said to be nutrient-rich and that offer dense health benefits like apoptogenic properties. Innova Market Insights data indicates that the top five ingredients that have enjoyed the highest growth in percentage of new food and beverage launches tracked with a superfruit claim in 2017 were pomegranate, goji, acai, lychee and jujube.

Click to EnlargeThe fruit is dried and turned into a powder. Suppliers such as Nexira are highlighting the fruit’s exotic flavor, which may appeal to consumers who are increasingly adventurous in their flavor choices. According to Innova Market Insights, there has been a 35 percent growth in new food and beverage launches with a “discovery” claim, and a 17 percent growth in those with “ethnic” flavors. Additionally, consumers are seeking richer experiences with product storytelling and novelty, excitement with surprising flavors, and world inspiration from across the globe.

The fruit is likely to be at least somewhat novel to most Western consumers, as the dried pulp was only authorized in the EU as a safe food ingredient in 2008. In the same year, the US Food and Drug Administration (FDA) granted the ingredient Generally Recognized as Safe (GRAS) status. Since then, the fruit has struggled to fully enter mainstream awareness due to the 2008 financial crisis, which saw companies withdraw innovation.

However, baobab has recently started to see a regained interest, with an increasing number of NPD with the fruit as an ingredient occuring every year since 2011. Innova Market Insights data shows that Europe accounts for over half (52 percent) of all launches tracked with baobab within the food and beverage space, while North America follows at 35 percent. Globally, the data reflects the average annual growth of 53 percent from 2013 to 2017.

Last month, German company Beeneo released honey with baobab powder to give the honey “a slight lemony taste.” Additionally, Danone has released a Baobab yogurt drink under its Actimel brand. The label claims that “Baobab is the African tree that can live for up to a thousand years, which is carefully blended with delicious yogurt containing billions of L. Casei cultures. A shot of smooth and zesty flavors, plus a dash of chili to tingle your taste buds.” 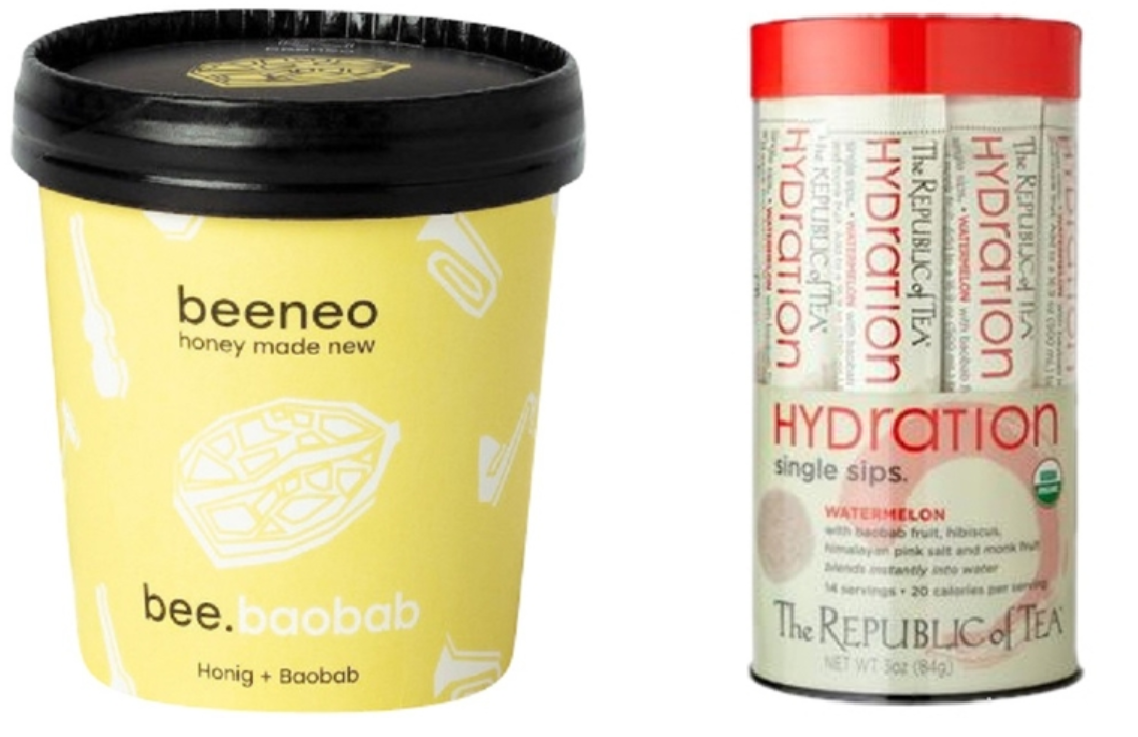 Click to EnlargeThe honey and tea are both new launches that include baobab as an ingredient. (Source: Innova Market Insights Database)

As well as being a primary flavor, baobab is also often included as an ingredient in other products. US company, The Republic of Tea, released Hydration Single Sips in Watermelon Infusion, with baobab being listed as the second ingredient – even before watermelon.

According to Nexira, the baobab powder can be easily incorporated into various applications and has a slightly tangy taste and an ivory color. Specifically, it recommends adding the powder to yogurts, ice creams, chocolates, cereal bars, beverages and smoothies.

A potential barrier to the baobab becoming a mainstream superfruit could lie in the sustainability of the tree itself. Last year, a study found that the oldest and biggest baobab trees are falling down and dying. This is likely due to climate change but more research is necessary, the researchers note.

In Nexira’s case, the company only uses the baobab fruit in its products to ensure that the trees are undamaged. The pulp is separated from the pod and is then ground up into a powder. The company says that it is committed to the socially responsible and sustainable production of its powder, and that its sourcing supports local harvesting and contributes to create positive socio-economic impacts in Africa.