You are in : All News > Applied Food Sciences Secure Patent for Producing Guayusa Extract 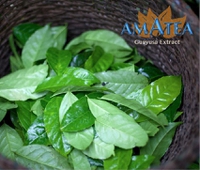 28 Mar 2017 --- Applied Food Sciences, Inc. (AFS) has announced it is now the exclusive owner of a process patent that covers the production of enriched natural guayusa, from a single source plant, containing antioxidants, amino acids and caffeine.

Guayusa is a caffeinated leaf of the holly species that grows only in the upper Amazon, and the purpose of this process patent is to create a highly water-soluble energy ingredient for a healthier application of caffeine, chlorogenic acid antioxidants, catechins antioxidants, and trace elements of other nutritional compounds.

Guayusa extracts made with this patented process are easy to work with in formulation as a featured ingredient for an RTD tea-like beverage or used to produce a functionally enhanced beverage.

In combination with this patent release, Applied Food Sciences is launching its newest branded ingredient offering, AMATEA guayusa extract – a highly water soluble ingredient for the application of focused energy intended in beverages and nutritional supplements.

"While other suppliers are able to present a guayusa ingredient as a micronized powder or a concentrate, they cannot create an extract that exceeds the levels of caffeine and other health compounds greater than the levels present in its natural state," Brian Zapp, Director of Marketing at Applied Food Sciences, told NutritionInsight.

"This patent really establishes AFS as the sole manufacturer able to create a standardized extract for guayusa that elevates its healthy compounds, including chlorogenic acids and caffeine."

"Our Standardized extract, in AMATEA, is highly water soluble and provides 20% caffeine and 30% chlorogenic acids. This allows beverage manufacturers to obtain an efficacious serving of both, but in a clean and clear presentation (i.e. no sediment, no cloudy formulation). This is extremely difficult to accomplish in other ingredient offerings outside of this patented process."

AFS say that because it is low in tannins, AMATEA is not bitter, dry, or chalky tasting like many other more astringent tea extracts. Instead AMATEA is naturally sweet to complement a variety of flavors.

AMATEA is also clear in solution, as well as non-GMO, GRAS (Generally Recognized As Safe), and organically grown.

In terms of which nutrition sector the company sees Guayusa playing a pivotal role in the future, Zapp said: "While natural energy beverages are certainly seeing the largest traction with this ingredient, in fact sales of items where guayusa is the primary ingredient are up 18% cross channel in beverages, we also see a lot of interest sparked in the nutritional supplement market for cognitive function and focused energy."

"This is because of the synergistic effect guayusa has in it polyphenol compounds that help balance the nervous system with the impact of caffeine."

"Initial research has shown some very interesting results that suggest this ingredient could be huge for the modern employee who wants mental stimulation energy from caffeine without the anxious feeling in how it impacts the nervous system."

Chris Fields, AFS' VP of Scientific Affairs, added that "AFS immediately started generating science to help researchers understand the synergies with caffeine among other naturally occurring compounds and how they impact physiological and hormonal biomarkers in the human body."

“This is significant because providing a conventional energy ingredient that typically works through stimulation of the central nervous system, like caffeine, with one that may help regulate neurotransmitter functions within the body, could be a critical benefit to the cognitive energy category.”

Comax Flavors now offers caffeine maskers and bitter blockers to offset the negative taste found in functional F&B products. The move from the company comes amid a... Read More

The functional beverage market is in need of a “shake-up,” according to Rune Rønhave Laursen, CEO and founder of Danish biotech company Clutch... Read More