You are in : Baobab Fruit Achieves US GRAS Green Light 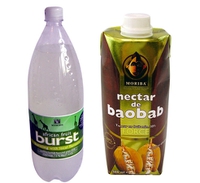 09 Sep 2009 --- Baobab fruit powder will be imported by Afriplex’s US-based distributors, as a highly nutritious ingredient for food and drink products. The healthy drinks and snacks market, including smoothies and cereal bars is a key target.

9 Sep 2009 --- The US Federal Department of Agriculture has approved PhytoTrade Africa’s GRAS notification “Generally Regarded as Safe” for the African Baobab fruit giving it the green light for import into the United States. The move was dubbed ‘a lifeline to millions’ by PhytoTrade Africa, the organisation that made the application and represents rural producers from across southern Africa. Under US legislation new or exotic food ingredients need pre market approval before being sold and consumed in the United States. The European Union gave PhytoTrade Africa approval for Baobab to be imported into the EU in 2008. PhytoTrade Africa together with commercial partner, plant extract specialists, Afriplex, plan to officially launch Baobab powder onto the US market in early November 2009.

Thus far baobab is virtually unheard of as an ingredient in finished products. The Innova Database has tracked just seven products in the last three years using the ingredient, including Woolworths African Fruit Burst Sparkling Baobab Flavored Grape Drink, which was recently launched in South Africa. This approval should lead to increased interest on the US market, however, which has already featured supplements using the ingredient.

Baobab fruit powder will be imported by Afriplex’s US-based distributors, as a highly nutritious ingredient for food and drink products. The healthy drinks and snacks market, including smoothies and cereal bars is a key target.

Cyril Lombard, who heads up Market Development at PhytoTrade Africa says “With innovative formulations, Baobab fruit could enable food and beverage formulators to develop products naturally high in fibre and vitamin C. The levels of key vitamins and minerals in Baobab, such as vitamin C and calcium, are significantly superior to those found in wellknown superfruits such as blueberry, cranberry and pomegranate”.

“Although further research is required, it is clear from published papers and our own research that Baobab dried fruit pulp contains powerful antioxidants. Ranking of ORAC values shows Baobab dried fruit pulp to have double the capacity of pomegranate and cranberries, and even more than fruits such as blueberries, raspberries and blackberries” he continues. “The PhytoTrade Africa GRAS notification dossier for a depectinised extract is also progressing well. This product will enable formulators to develop beverages and dairy products where the pectins are not desired, or a clear product is needed”.

The iconic Baobab tree – also known as the “upside-down tree” and “The Tree of Life” – is abundant in the southern African bush. Indigenous peoples have eaten its fruit for centuries for its many nutritional properties. It contains over six times more Vitamin C than oranges and twice as much calcium as milk. It is also high in anti-oxidants, iron and potassium and was traditionally used by sailors to stave off scurvy.

PhytoTrade Africa’s Chief Executive, Gus Le Breton predicts a surge in demand following the decision and expects Baobab products to appear on US supermarket shelves within months. ‘Baobab is an ideal ingredient for health drinks, cereal bars, jams and sauces and its well documented nutritional benefits provide manufacturers with a new opportunity to target the booming market in healthy foods,’ he says.

‘Dozens of companies have shown interest in Baobab since we submitted the application many have already conducted initial research. Now that approval has been given, they can progress to full scale product development.’

PhytoTrade Africa is dedicated to developing ethical and sustainable global trade in African natural products for the benefit of rural communities in southern Africa. Estimates suggest that there are up to 1,000 indigenous plant species in the region with commercial potential in the global food and personal care markets.