You are in : All News > Spanish calls for Nutri-Score to make exceptions for olive oil and jamón ibérico 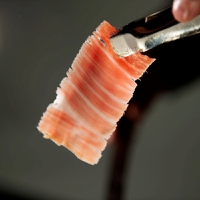 12 Feb 2021 --- Nutri-Score is butting heads with Mediteranean diets, as Spain’s ministry of consumer affairs calls for olive oil to be left out of the front-of-pack labeling system. It argues that the current algorithm does not reflect the oil’s nutrition benefits.

Additionally, an Iberian pork association is calling for Nutri-Score to make an exception for jamón ibérico.

“Nutri-Score isn’t fair as it doesn’t take into account all the nutrients in our products – just the proteins. However, there are also vitamins and minerals that are essential nutrients,” a spokesperson for the Iberian Pig Interprofessional Association (ASICI) tells NutritionInsight.

The association notes that including Iberian pork in the Nutri-Score framework could put a brake on consumption. External markets – where consumers are not as informed about Iberian products – could be particularly high risk. The ministry hopes that none of the countries using Nutri-Score will force Spanish oil producers to implement the labeling.

Government appeals
In a Congress appearance last June, Alberto Garzón, the Spanish minister of consumer affairs, explained that the country adopted the Nutri-Score system due to the level of backing from scientists and nutrition specialists. It also has good support from consumer associations in both Spain and on a European level.

At the time, Garzón acknowledged that while no existing labeling system is perfect, there is the greatest positive consensus around Nutri-Score.

Olive oil’s rating is a middling “C” accompanied by a yellow color, which is on par with other oils such as rapeseed oil.

However, the Spanish Agency for Food Safety and Nutrition (AESAN) is now providing evidence to the Nutri-Score Scientific Committee to help improve the rating of the oil in the algorithm.

The ministry of consumer affairs emphasizes that olive oil is an essential part of the Mediterranean diet, which is generally characterized by a high intake of unsaturated fats, fruits, vegetables, legumes and grains and a low intake of red meat and dairy.

The diet is associated with a host of health benefits, including reduced diabetes risk, heart health, liver health and fighting cognitive decline. However, a study early this week found that a low-fat vegan diet is more effective in producing weight loss than a Mediterranean diet.Last year, Spain exported 1,116,139 metric tons of olive oil, accounting for €2.762 billion (US$3.337 billion).

International impacts
According to the Spanish ministry of consumer affairs, France, Germany and the Netherlands, which have already implemented the Nutri-Score, have shown Spain that they support olive oil leaving this labeling system.

The ministry’s objective is that, ultimately, none of the countries adhering to the system will force Spanish oil producers to implement the labeling on their containers.

At present, front-of-pack labeling is voluntary in Europe. No country can force producers to provide this information on the front of the containers, although some distribution companies have begun to require it.

Nonetheless, the intention of the European Commission is to move toward common and mandatory labeling throughout the EU by 2022.

Last year, food industry giants, including Nestlé and Danone, joined a coalition calling for Nutri-Score to become the mandatory front-of-pack nutrition labeling system across the EU.

Nestlé uses Nutri-Score on its products in several countries, including Austria, Belgium, France, Germany and Switzerland.

Industry support
The Spanish Olive Oil Interprofessional – which represents 400,000 olive growers, 1,755 oil mills, 1,500 bottlers and 22 refineries – has come out in strong support of the ministry’s actions.

The organization says that this should be a “first step” in ensuring that any nutritional labeling system correctly assesses olive oils’ contribution to a balanced diet.

“It is fundamental that any labeling system should reflect the scientific evidence that researchers have provided over the last few decades on olive oil’s health benefits,” says Pedro Barato, the president of the Spanish Olive Oil Interprofessional.

“That is why it is so important that Nutri-Score re-evaluates the ‘grade’ that olive oils receive.”

This is not the first time that industry has taken issue with front-of-pack labeling systems. In September, Copa and Cogeca – which represents European farmers and agri-cooperatives – argued that color-coded systems “stigmatize” highly nutritious products and often promote unhealthy options.

Edited and translated from Spanish by Katherine Durrell

The Mediterranean diet has been linked to a lower mortality risk in adults over 65. A new longitudinal study of 642 participants found that the score of the... Read More

The European Specialist Sports Nutrition Alliance (ESSNA) is warning about the dangers of a “one size fits all” approach for front-of-pack labeling (FoPL)... Read More

Mankai, a patented strain of Wolffia globosa, has the potential to “change the way people consume vegetables and leverage food for health.”