You are in : All News > Dropping diabetes rates suggest efficacy of preventative strategies, says analysis

13 Sep 2019 --- Cases of diabetes have decreased in across many populations, according to an analysis of 47 studies between 1980 and 2017. Since 2006, the incidence of clinically diagnosed diabetes has continued to rise in only a minority of populations, with a third of the studies reporting a fall in incidence in this time period. While this is likely due to the success of preventative strategies changing people’s dietary habits, the researchers stress that “we cannot take our foot off the pedal” if the changes are to be maintained.

People’s general awareness about eating healthily has changed, while policy has also played a role in cutting diabetes rates, Dianna Magliano, Head of Diabetes and Population Health at the Baker Heart and Diabetes Institute, Australia, and lead analysis author, tells NutritionInsight. “Various countries have junk food or sugar taxes, while trans-fats are banned from most wealthy countries. Food formulation has also changed, and there is now targeted prevention interventions on high-risk people and across populations,” she explains.

The US, Israel, Switzerland, Hong Kong, Sweden and Korea all saw a decrease in diabetes incidence after 2005. Meanwhile, Portugal, Denmark and Germany had increasing levels during the same time period and Canada, Italy, Scotland, Norway, US (non-Hispanic white), and the UK showed stable incidence. 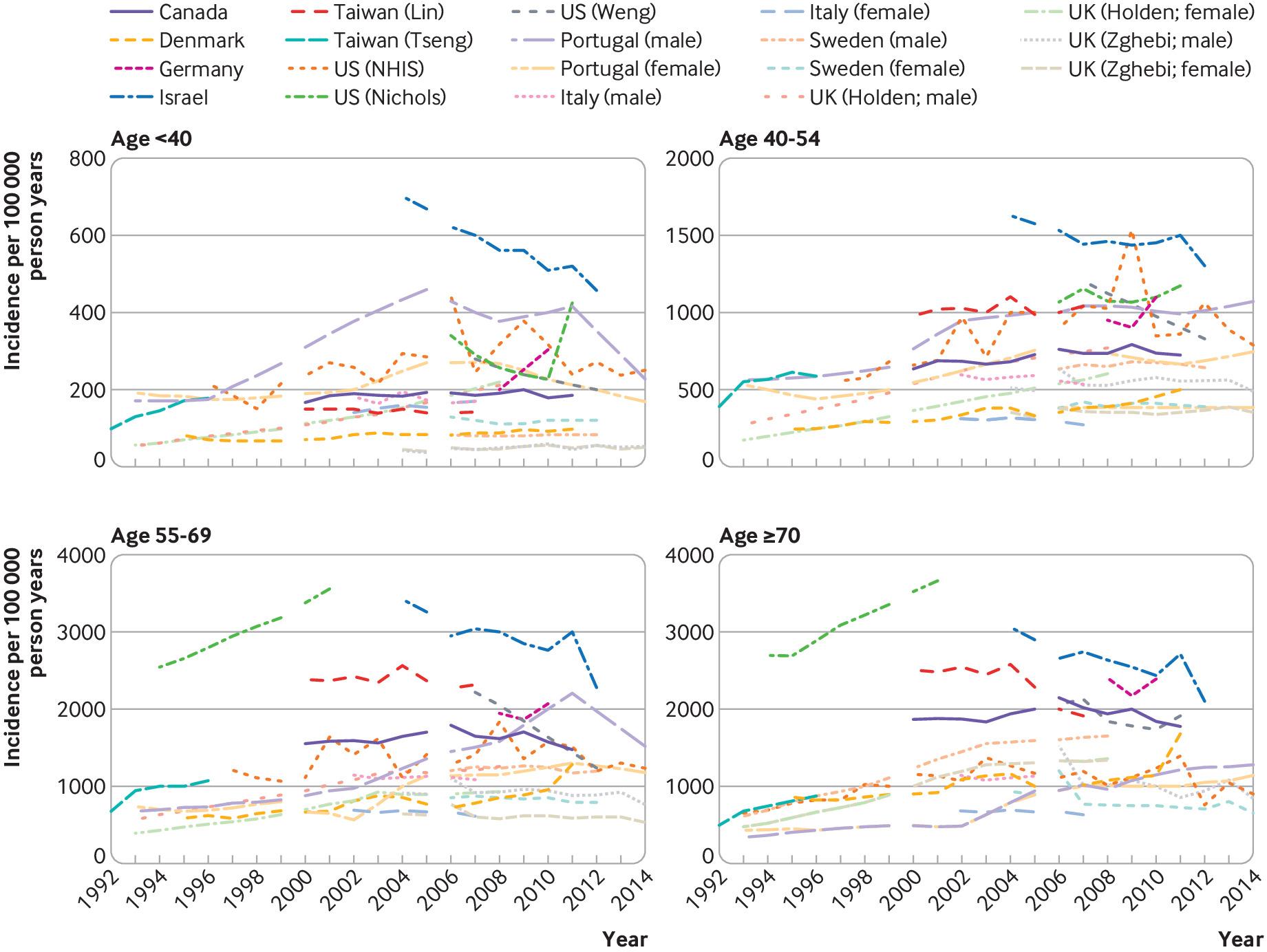 Click to EnlargeIncidences of diabetes over time in studies recording age. (Source: BMJ)“We’re not entirely sure of what is behind the fall as there is still some uncertainty interpreting the data, but really, we believe it is likely that prevention activities have played a role. People are making different food choices, with there being great change in what and how we eat. Therefore, we appear to at least embraced part of the message of healthy lifestyles,” says Magliano.

The researchers were inspired to embark on the analysis following two American studies that reported a flattening of incidence, as well as Center for Disease Control (CDC) data from the National Health Interview Survey that also noted a downturn. “We embarked on doing this extremely large systematic review. We had to read 22,000 or so abstracts and pulled out all the studies that had reported on diabetes incidences from the specified timeframe. We analyze these in decades and identified populations where the rates were going up the ones, ones that were stable and the ones that were going down,” explains Magliano.

Diagnosed diabetes was reported on in 80 percent of the included studies, which consisted of open population-based cohorts, diabetes registries, and administrative and health insurance databases on secular trends in the incidence of total diabetes or Type 2 diabetes in adults. Additionally, the analysis has limited evidence from low- and middle-income countries, meaning that the data is not representative of global diabetes trends.

“It is imperative that we continue to use preventative strategies now. We have to maintain these kinds of changes in the epidemic, which is why we can’t be complacent just because we might have a really good result here. We’d all have to keep going we could be cautiously optimistic but we cannot take our foot off the pedal – we have to keep going,” emphasizes Magliano.

The researchers have further work coming out next year that they hope will strengthen these findings. “We’ve got the real data from all of the countries that we could get it from and we’re going to analyze that to see if we can observe these patterns in more contemporary data,” she concludes.

Another study recently proposed that a US tax on sugar-sweetened beverages could cut the cases of Type 2 diabetes by up to 3 percent, or around 47,000 people per year. Meanwhile, UK research has found that a tax on high sugar snacks, such as cookies, cakes, chocolates and candy, might be more effective at reducing obesity levels than a sugary drink tax. However, the UK’s sugar tax may be under jeopardy following a notable admission from Sajid Javid’s first Spending Review as Chancellor.