You are in : All News > US sugary drink tax could save US$1.8bn and slash obesity rates, says study

US sugary drink tax could save US$1.8bn and slash obesity rates, says study

11 Sep 2019 --- While some US cities currently tax sugar-sweetened beverages (SSBs) by the volume of the drink, a tax system based on the amount of sugar the drink contains would produce greater health benefits and economic gains. This is according to an analysis by researchers at New York University (NYU), Harvard’s TH Chan School of Public Health, the Wharton School at the University of Pennsylvania, and the University of California (UC), Berkeley. The proposed taxing system could lead to an annual national gain of US$1.8 billion, primarily generated through savings in health care costs.

“Despite their different sugar content and different resulting harms, all sugar-sweetened beverages are taxed at the same rate per liter under a volumetric tax,” write Harvard’s Anna Grummon, NYU’s Hunt Allcott, Wharton’s Benjamin Lockwood, and UC Berkeley’s Dmitry Taubinsky in Science. “This tax structure gives consumers no incentive to substitute from high-sugar to low-sugar SSBs, even though the latter are less harmful. Thus, while a volumetric tax reduces consumption of SSBs in general, it does not provide the maximum possible health benefits.”

“I think that policy makers have not seen a clear articulation of the benefits of taxing the harmful sugar content instead of the amount of liquid. We hope that our analysis will help to raise awareness about how better tax design can help people to be more healthy. Additionally, the Trump Administration has not paid much attention to the possibility of taxing sugary drinks,” Allcott tells NutritionInsight.

However, a nationwide tax on liquid volume would still be highly beneficial. A 34 cent per liter volumetric tax would cause the average US adult to drink 2.9 fewer ounces of SSBs per day, a 22 percent reduction. This alone would lead to an average weight loss of 2.3 pounds and a 2 percent reduction in obesity rates, accounting for 2.1 million adults. The number of new Type 2 diabetes cases could also be cut by 2.3 percent, or around 36,000 people a year. The economic savings from this tax system would be US$1.4 billion. 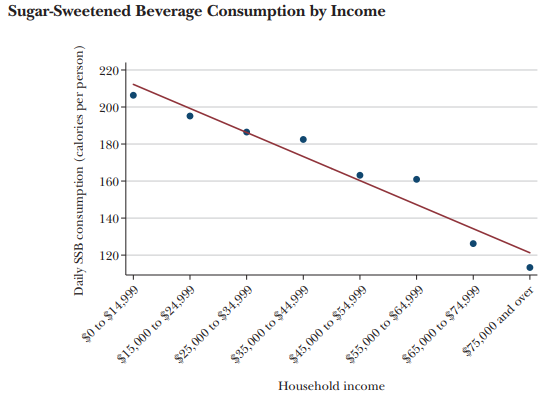 Click to EnlargeTaxes on SSBs could be regressive as people with higher incomes consume fewer calories from SSBs. (Source: Science)The analysis’s findings are in line with the economic principle that such corrective taxes should be proportional to the harm caused. “The harm from sugary drinks comes from the sugar, and SSBs vary substantially in sugar per unit volume,” the authors add.

“Once there is agreement to tax SSBs, it seems natural to tax the harmful sugar, instead of the liquid that comes with the sugar,” the authors conclude. “Our calculations suggest that this idea offers valuable low-hanging fruit for improving public health.”

The current taxing status
Currently, seven US cities – including three in California – tax SSBs by the volume of the beverage, with most charging 1 cent per ounce, although some cities have a higher rate. Cook County, Illinois, which contains Chicago, enacted a tax in 2016 but repealed it a year later. Additionally, 23 states do not define SSBs as “groceries,” meaning that they are not exempt from sales taxes and are, therefore, more expensive.

The researchers also propose that diet drinks and fruit juice should only be included if they cause uninternalized health harms, which has not yet been found to the same scale as SSBs. However, a study published in the British Medical Journal earlier this year did find that sugary drinks – including fruit juice and soda – may increase the overall risk of cancer. Meanwhile, another study recently concluded that sugar-free soda is linked to an increased risk of overall death.

Currently, most taxes apply to SSBs, which are any drink with caloric sweeteners. This category could include soft drinks, sports drinks, fruit drinks and sweetened coffee or milk. Philadelphia and the erstwhile Cook County taxes included diet drinks in an attempt to make the tax less regressive as higher-income people buy more diet drinks. However, the researchers write that the Philadelphia tax is an inefficient way to raise revenue and that the regressive argument is misguided.

23 Jun 2020 --- Tiered fixed sugar tax designs can produce substantial health gains, as well as lower health costs in the US, according to a simulation model of different designs... Read More