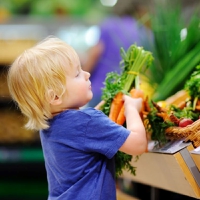 28 Aug 2020 --- UK organizations are calling for a “whole society” preventative approach to reduce childhood obesity. A new report from the Institute for Public Policy Research (IPPR) think tank makes several policy recommendations, including the restoration of the public health grant, a 9 pm watershed on junk food marketing and a subsidy scheme for healthy foods.

“The nutrition industry is vital in the fight against obesity. Education is the first step in encouraging healthy lifestyles. However, if we are going to reverse obesity successfully, we need the whole of society to take action,” Dean Hochalf, an IPPR Researcher, tells NutritionInsight.

First, IPPR argues that the government should introduce a non-essential food levy on certain pre-packaged products. This would help to reduce consumption and encourage suppliers to create healthier recipes or formulas. The revenue from this tax could then be reinvested, with IPPR proposing a voucher that can be spent on all grocery items not covered by the tax.

It also recommends that the local government is empowered to deliver a wide range of health services within their community. This could be achieved through funding, with IPPR proposing increasing the public health budget by a minimum of £850 million (US$1.1 billion) – the estimated cuts to public health services since 2014 – so that preventative services can help those in need.

Investing in the future
IPPR’s report, called “The Whole Society Approach: Making A Giant Leap On Childhood Health,” is supported by organizations including Diabetes UK, Cancer Research UK and the British Heart Foundation (BHF). The think tank estimates that if the UK government achieves its aim of halving childhood obesity by 2030, it will save the NHS £37 billion (US$49 billion) and result in savings of £202 billion (US$269 billion) to wider society over the lifetimes of the current generation of children in England.

However, if childhood obesity levels continue to rise, pupils currently in school will generate up to £74 billion (US$98 billion) in costs for the NHS throughout their lifetime. Another £405 billion (US$539 billion) could go down the drain for the wider society in terms of lost productivity and sickness.

Hochalf states that there are a few reasons why it is important to support children. “It helps foster healthier lifestyles which will last with them into adulthood. It is a growing problem which leads to poorer performance in school and potentially other physical and mental health problems. Finally, it is a moral imperative that society looks out for the best interest of its children – every child is entitled to a happy, healthy childhood.”

Contributions needed across society
Chris Thomas, a Senior Health Fellow at IPPR and one of the authors of the report, points out that historically, major progress on health outcomes has come when contributions have come from across society – when business, community, people, government and public bodies have all played their part.

“We call on the government to recreate that approach. Success could facilitate the kind of major health gains the Victorian’s achieved through sanitation or childhood immunization in the 20th century. Failure could mean a century of stalled progress,” he states.

“Children are growing up in an increasingly obesogenic environment. Junk food is everywhere; it is incredibly normalized. People think obesity is caused by gluttonous behavior, but in reality, it is just those few extra calories consumed on a daily basis. This is all the worse for children growing up in deprived communities. Creating a healthy environment, free from social and commercial pressures, is the biggest challenge to ensuring every child is able to enjoy a healthy diet,” says Hochalf. 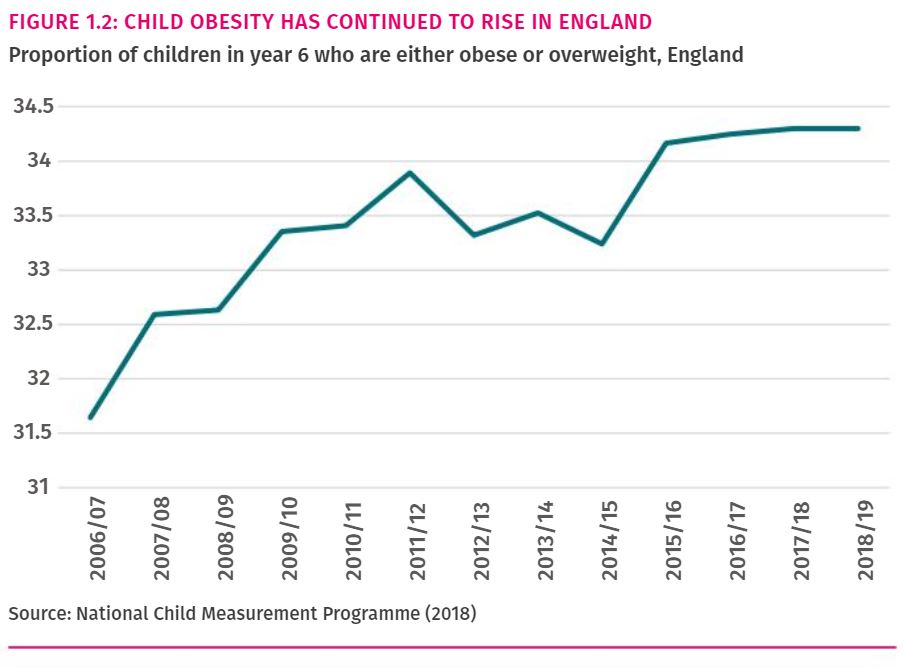 Stagnant obesity rates
In 2018, the UK government first announced its target to cut childhood obesity rates in half by 2030. Since then, a range of suggestions has been made, including a crackdown on toddlers’ sugar consumption, following an anti-smoking framework, limiting the promotion of food and drinks high in fat, sugar or salt (HFSS), and banning fast-food chains near schools.

Most recently, the UK announced a new raft of measures to slash obesity rates in light of its connection with worse COVID-19 outcomes. However, Thomas says that this represents “one small step, not a giant leap,” demanding that policy goes further.

Hochalf adds that child obesity rates have remained virtually the same over the last decade, with one in five children entering secondary school obese. “Unless action is taken now, it is hard to see how we will meet the government target by 2030.”

Notably, many UK organizations active in the obesity space are concerned about this month’s announcement that Public Health England (PHE) will be scrapped and replaced by the National Institute for Health Protection.

“I am sure the new body will carry itself with all the professionalism that PHE has demonstrated when it comes to protecting national health. I hope they continue to recognize the need for action on obesity and why we must tackle the underlying social, economic and commercial determinants of obesity,” concludes Hochalf.