You are in : All News > Superior plant-based malnutrition solution? Expert slams WHO for focusing on money over impact 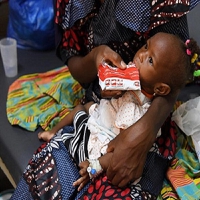 16 Aug 2022 --- As the cost of ready-to-use-therapeutic-food (RUTF) is set to rise, an expert is accusing the World Health Organization (WHO) of rejecting plant-based RUTFs because it is more concerned with fundraising and “maximizing income streams” than with treating those suffering from severe acute malnutrition (SAM).

In a letter to The Lancet journal, Dr. Steve Collins, argues the WHO is ignoring the effectiveness of less expensive plant-based RUTFs. He notes the effects between dairy and plant-based RUTF is the same but for a three-day delay until the impact is felt for the latter.

Collins is the director of  Valid Nutrition, which produces plant-based RUTF. He concedes his statements can be perceived as a conflict of interest but stands by his accusations that the WHO is deliberately blocking plant-based RUTF.

The organization did not immediately respond to NutritionInsight’s request for comment.

Speed as a factor?Collins holds that plant-based RUTFs are just as effective as the dairy-based versions and even superior in some ways.


In 2007, the UN stipulated that at least 50% of the protein in RUTFs must come from dairy, which the WHO upheld in 2019 following a study which Collins characterizes as five ineffective plant-based recipes. According to Collins, the position of the WHO is that non-dairy-based RUTFs are not efficient enough in promoting weight gain.

Collins concedes that children suffering from Severe Acute Malnutrition (SAM) gain weight slower than those using the dairy-based RUTFs and take an average of 8% longer to fully recover – 43 rather than 40 days.

“That is why they are blocking it,” he tells NutritionInsight. But he contends that this argument makes no sense.

“RUTFs are used for the treatment of SAM, an immediate life-threatening condition associated with a very high mortality rate,” Collins stresses. “The aim of treatment is to save the child’s life in the acute phase rather than making them grow fast during this initial lifesaving treatment; not to maximize growth.”

Problem runs deep?
His accusations come at a time when the price of RUTFs is set to rise by 16%, which UNICEF has stated will impact millions of children who are at risk of death from starvation.

“After working in the humanitarian system for over 35 years, I have sadly come to the conclusion that many of the United Nations (UN) organizations and large non-governmental organizations (NGO) are more focused on controlling resources and maximizing income streams and profile rather than actual impact,” says Collins.

“I am not suggesting that this applies to everyone and every organization. In many cases, it has probably evolved inadvertently, given the nature of the system. However, I believe that there is a major cultural problem at the heart of humanitarianism and development.”

Something is better than nothing
Collins also says a 2017 randomized controlled trial published in the American Journal Of Clinical Nutrition on the result of a program implemented by the Malawi government has proved the efficacy of the soya, maize, sorghum and amino acid-enhanced RUTF recipes.

Moreover, he cites a 2019 study showing that these formulations are “superior to the milk-based product for the treatment of iron deficiency and anemia, serious conditions that occur in the majority of children with SAM.”

“If I had a child with SAM, I’d rather that they take a few days longer to recover but were properly treated for anemia and iron deficiency than be treated a few days quicker but be discharged with iron deficiency and anemia,” argues Collins.

“Likewise, I’d rather my child was treated with the plant-based formulas rather than not treated at all because the program couldn’t afford sufficient RUTF,” he says.

Collins further elucidates that the inability of the WHO to adopt this cost-effective option may adversely affect donor confidence.

“It is very difficult indeed to understand why the WHO continues to block this recipe given the high cost and shortage of RUTF and resultant low global program coverage.”

Rampant failures and misconceptions
Additionally, Collins holds that the failure to adopt these plant-based RUTFs is symbolic of the “systems” failure to actually address SAM.

“At the core of the problem is a profound misconception at the heart of the aid and development industry,” Collins explains. “Too many of those involved frequently misconceive the industry as something primarily benevolent; the ‘charity sector’ supplying ‘aid’ to ‘beneficiaries’ - and they fund it by selling this misconception to the public and politicians.”The WHO rejected the use of plant-based RUTFs after conducting a study of five different recipes in 2019.

“This misconception is profoundly damaging because it focuses attention on the humanitarian actors and funders, on their motives and strategies rather than the needs, rights and realities of their clients. In this case, those suffering from SAM,” he emphasizes.

“The results are a supply-side, central-planning mentality at the industry’s core and a remuneration of systems related to processes and control of resources rather than outcomes and impact.”

Letting the data speak?
Collins further states that part of this stems from the NGOs’ propensity to denigrate profit, which precludes the private sector and restricts products and innovation.

“Any healthy functioning market that is meeting the needs of its clients permits choice.”