You are in : All News > Millions of children at risk of death from severe malnutrition, UNICEF warns

Millions of children at risk of death from severe malnutrition, UNICEF warns

27 Jun 2022 --- UNICEF is warning an “explosion of deaths” is imminent in the Horn of Africa, while almost eight million children under the age of five are at risk of death from severe wasting in 15 countries.

The agency states the number is increasing by the minute and holds this is a result of drought, the pandemic’s ongoing effects and soaring food prices, intensified by the war in Ukraine.

“There is no time to waste. Waiting for famine to be declared is waiting for children to die,” says UNICEF executive director, Catherine Russell.

Severe wasting is a condition in which a person’s body weight becomes too thin for their height. It is said to be “the most visible and lethal form of malnutrition.”

The 15 most affected countries are Afghanistan, Burkina Faso, Chad, Democratic Republic of the Congo, Ethiopia, Haiti, Kenya, Madagascar, Mali, Niger, Nigeria, Somalia, South Sudan, Sudan, and Yemen. Unicef is targeting these countries in an acceleration plan to help avert an “explosion of child deaths and mitigate the long-term damage of severe wasting.” 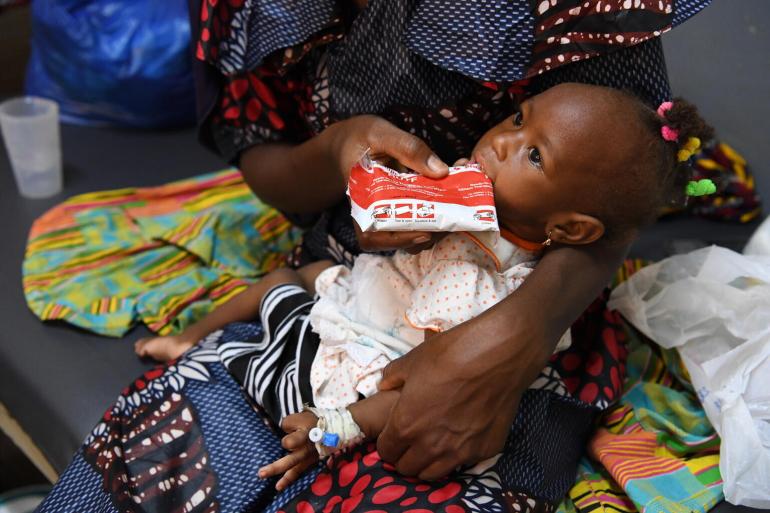 UNICEF says there is only a small window of opportunity to help save these children.
UNICEF’s report comes on the heels of last month’s warning that the price of ready-to-use therapeutic food (RUTF) would likely rise by 16% in the coming months. These price hikes are themselves a result of the war in Ukraine perpetrated by Russia. Countries like Somalia imported up to 92% of their wheat from these two countries. Supply lines for this vital commodity have been completely severed.

“If the world does not widen its gaze from the war in Ukraine and act immediately, an explosion of child deaths is about to happen in the Horn of Africa,” underscores UNICEF’s deputy regional director for eastern and southern Africa, Rania Dagash.

Research shows that the longer these children are deprived of essential nutrients, the worse the damage will be. Children suffering from this form of malnutrition can experience severe and lingering effects on their cognitive abilities.

The agency estimates that around 386,000 Somali children are facing life-threatening malnutrition. It also states that more than 1.7 million children are in a crisis of malnutrition spanning Ethiopia, Kenya and Somalia. This is the resulting “domino effect” of a report several scientists issued in April.

“Death rates are also concerning,” reports UNICEF. “This year, in some of the worst affected areas in the Horn of Africa, three times as many children have already died from severe acute malnutrition with medical complications in in-patient treatment centers compared to the whole of the previous year.”

Urgent support neededThe war in Ukraine, extensive droughts and the lasting effects of the pandemic are all factors in the current crisis.
UNICEF is calling on world leaders to commit to a US$1.2 billion package that may save millions of children from a slow death. They have also asked that world leaders prioritize severe wasting in response to all global food crises.

“Somali children are living on the frontlines of the climate crisis now – this is not going away – we need to see significant step-change from the donor community to adequately support families to weather these cyclical climatic shocks,” says Russell.

Beyond that, UNICEF emphasizes the need to work for long-term goals. They also ask for a focus on both pre and neonatal nutrition, along with the acquisition and dispensation of RUTFs. UNICEF states that these long-term solutions should include nutrition, water quality and education.

In May, DSM, UNICEF and nutrition think tank Sight and Life extended their partnership to address malnutrition on a global scale. The cooperation will provide better nutrition for sub-Saharan Africa and Asia while also aiming to expand to Latin America for the first time.

Glanbia delivered 13% growth in the first half of 2022, driven by price increases and volume growth. Group revenues reached €2.8 billion (US$2.9 billion, while... Read More

As the cost of ready-to-use-therapeutic-food (RUTF) is set to rise, an expert is accusing the World Health Organization (WHO) of rejecting plant-based RUTFs because it... Read More

The US Department of Agriculture (USDA) is presenting a US$40 million budget for a nutritional management plan, after lawmakers passed the Inflation Reduction Act. The... Read More

More Lyons Magnus products have been recalled from the market, after the US Food and Drug Administration (FDA) announced an investigation for Cronobacter sakazakii and... Read More