You are in : All News > Prebiotic effects in human milk influenced by mother’s age 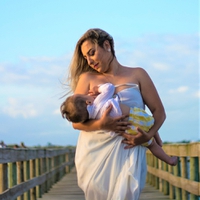 16 Apr 2020 --- Older mothers who take prebiotic supplements reap fewer benefits to their breast milk microbiota than younger mothers. This is according to a new randomized placebo-controlled trial published in the Nutrients journal, which examined how maternal diet can be supplemented by fructooligosaccharides (FOS) to influence the human milk microbiota and therefore strengthen maternal gut health.

“Our findings are particularly interesting to the infant nutrition field since maternal-neonate microbial transfers can occur via breastfeeding,” lead author Marina Padilha from the University of São Paulo, Brazil, tells NutritionInsight. She expects that it will be possible to modulate the human milk microbiota through the maternal diet in the near future. “This will aim to benefit the infant’s health by modulating the infant gut microbial colonization. Both FOS and galactooligosaccharides (GOS) are well-known for their effects on health, especially by stimulating beneficial microorganisms.”

The study revealed that younger mothers showed major changes in their microbiota profile after FOS supplementation. Meanwhile, older mothers who took FOS supplements had similar results to the placebo group, indicating a reduced efficacy for FOS in this group. “In addition, our results suggest that this influence of the FOS supplementation was different for each subject since no pattern of changes at the end of the intervention were found,” explains Padilha.

Indeed, the study reports that there were no statistical differences found for other variables tested in the model, including Body Mass Index (BMI) levels, antibiotic treatment during pregnancy or delivery, ethnicity, number of children, baby gender and baby feeding at first month.

Considering dietary intake can substantially vary throughout the life cycle, the researchers affirm that differences in dietary or lifestyle patterns can create differential responses to FOS supplementation. “Consequences of different dietary patterns throughout life may be related to influences on the gut microbiota, which have been extensively related to inter-individual variations in response to dietary interventions,” Padilha highlights.

What wasn’t found
Notably, the results did not reveal statistical differences between the two groups for the bacterial general after the 20 day intervention. However, the distances of the trajectories covered by paired samples from beginning to end of the supplementation were higher for the FOS ground. This indicates greater changes in microbiota compared to the control group.

“Certain bacteria, in particular species of Bifidobacterium and Lactobacillus, are strongly related to benefits in infant and adult health. These bacteria can be stimulated by the presence of prebiotics, such as FOS. In our study we did not find an increase of Bifidobacterium and Lactobacillus genera in the human milk and we attributed such results probably due to the short period of maternal supplementation.”

Distribution of the distances between “before” and “after” supplementation for each subject by group shows statistically significant differences between the placebo and the FOS group. Study motivation
The study was motivated by the existing knowledge of the beneficial effects of fibers, particularly prebiotics, on human health. This knowledge has long been translated into industry innovation, as recently exemplified by Israeli company Galam’s FOS, fiber ingredient called GOFOS. Derived from beet sugar, the ingredient boasts both gut health benefits and sugar reduction.

During pregnancy and the lactation period, prebiotics can reduce the risk for postpartum weight retention, contributing towards a lower risk for long-term obesity, and consequently, reducing the risk for non-transmissible chronic diseases, the study states.

Padilha encourages future research to be conducted in order to link the milk microbiota with expected clinical outcomes in terms of applications for infant formulae. She also is interested in the impact of changes in human milk on the infant’s gut colonization.

Lallemand previously spoke with NutritionInsight about how the Canada-based company is focusing on synergies to promote gut health and is also exploring the potential of prebiotic and probiotic blends.

Recent research has further investigated the safety and protective functions of breast milk with regards to the coronavirus pandemic in a bid to test whether it has antiviral properties that could protect infants from COVID-19.

Grace International, a distribution company based in South Korea, has become the sole distributor of BioGaia’s line of infant probiotic drops, Protectis. The move... Read More

Plant-based pediatric nutrition company Else Nutrition will begin selling its products in China in Q3 of this year through a partnership with Baozun, a key e-commerce... Read More