You are in : All News > Kaneka’s probiotic KABP Formulation aids with infant FGID symptoms, study finds 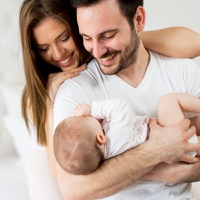 This is according to a Kaneka and Itay-based Pediatric Primary Care Local Health Authority study that investigated the KABP Formulations’ – a blend of Bifidobacterium longum subsp. longum KABP-042 and Pediococcus pentosaceus KABP-041 strains – safety and impact on the gastrointestinal tract (GI) system, including intestinal barrier integrity.

“Although the infant gut health category seemed to be at a standstill for some time, it is moving fast again, with strong growth of human residential bifidobacteria as the most relevant probiotic species with therapeutic benefits for babies.”

“This newly published study substantiates the efficacy of the KABP Formulation for reducing FGIDs – which is one of the most prevalent challenges for infants and a significant source of anxiety for parents,” says Mike Kolifrath, vice president, sales and marketing of the Probiotics division at Kaneka.

“Moreover, the study shows the efficacy of Floradapt Baby Colic, our dietary supplement probiotic that is constituted entirely of the KABP Formulation.”

Impact on anxiety and baby colic
According to researchers, parents had favorable anxiety outcomes as their infants benefitted from the probiotic.

According to the company, these study results further confirm the infant probiotics’ ability to aid with baby colic.Scientists predict that one in every two infants develops FGID during the first six months of life, with infant colic and functional constipation being the most common symptoms. Infants with FGID have altered microbiotas, which contribute to the condition known as a gut-brain axis disorder.

“Although Baby Colic is a dietary supplement and is not intended to diagnose, treat, cure or prevent any disease, this multi-pronged study of the effects of the KABP Formulation adds another layer of support to the existing evidence that baby colic supports a calm gut and healthy microflora in babies and helps reduce the duration of crying episodes and crying time,” Kolifrath explains.

Investigating KABP Formulation effects
During the study, liquid probiotic drops were given to 34 newborns for 14 weeks in the in-vivo part of the trial.

The KABP Formulation was shown to lower the severity of FGID and confirm its safety.

As several factors play a role in the pathophysiology of FGIDs, the researchers looked at the effects of B. longum KABP-042 and P. pentosaceus KABP-041 on infants of various feeding styles (breastfed versus formula-fed) and delivery methods (vaginally delivered or C-section).

The KABP Formulation’s effects were observed regardless of the feeding or delivery mode.

The research, which was published in the journal Frontiers of Microbiology, investigated the effects of the KABP Formulation using various methods, including in silico analyses, in vitro characterization and an in vivo trial on infants with FGID.

Meanwhile, the company’s Floradapt Brain probiotic (Lactobacillus Plantarum DR7) received approval from the US Food and Drug Administration. The probiotic operates through the gut-brain axis and may lower stress and anxiety.