You are in : All News > “Drink like there’s tomorrow”: Hangover-alleviating probiotic hits US market

ZBiotics’ bio-engineered solution will be “proudly” labeled as GMO

15 Aug 2019 --- ZBiotics, a genetic engineering company in the US focused on consumer health, announces today the official launch of the first genetically-engineered probiotic on the market. Zbiotics is a “functional beverage,” designed to break down an unwanted byproduct of alcohol – acetaldehyde – that is associated with the rough feelings the day after drinking. The launch of ZBiotics marks a landmark advancement in the field of biotechnology applied to probiotics. “We are only scratching the surface,” company Co-Founder/CEO and Ph.D. Microbiologist Zack Abbott, tells NutritionInsight.

Tackling the problem with nature
ZBiotics looked to nature to find the best way to break down acetaldehyde in the body, inspired by both the liver and bacteria. The human liver undergoes a two-step process to break down alcohol. First, the liver turns alcohol into acetaldehyde. Then the acetaldehyde gets broken down into acetate, a benign chemical similar to vinegar.

However, not all alcohol makes it to the liver; some stays in the gut where microbes fail to complete the two-phase process. The lack of acetaldehyde dehydrogenase in the gut – the enzyme used to break down acetaldehyde – is the main culprit for acetaldehyde buildup in the body, according to ZBiotics. 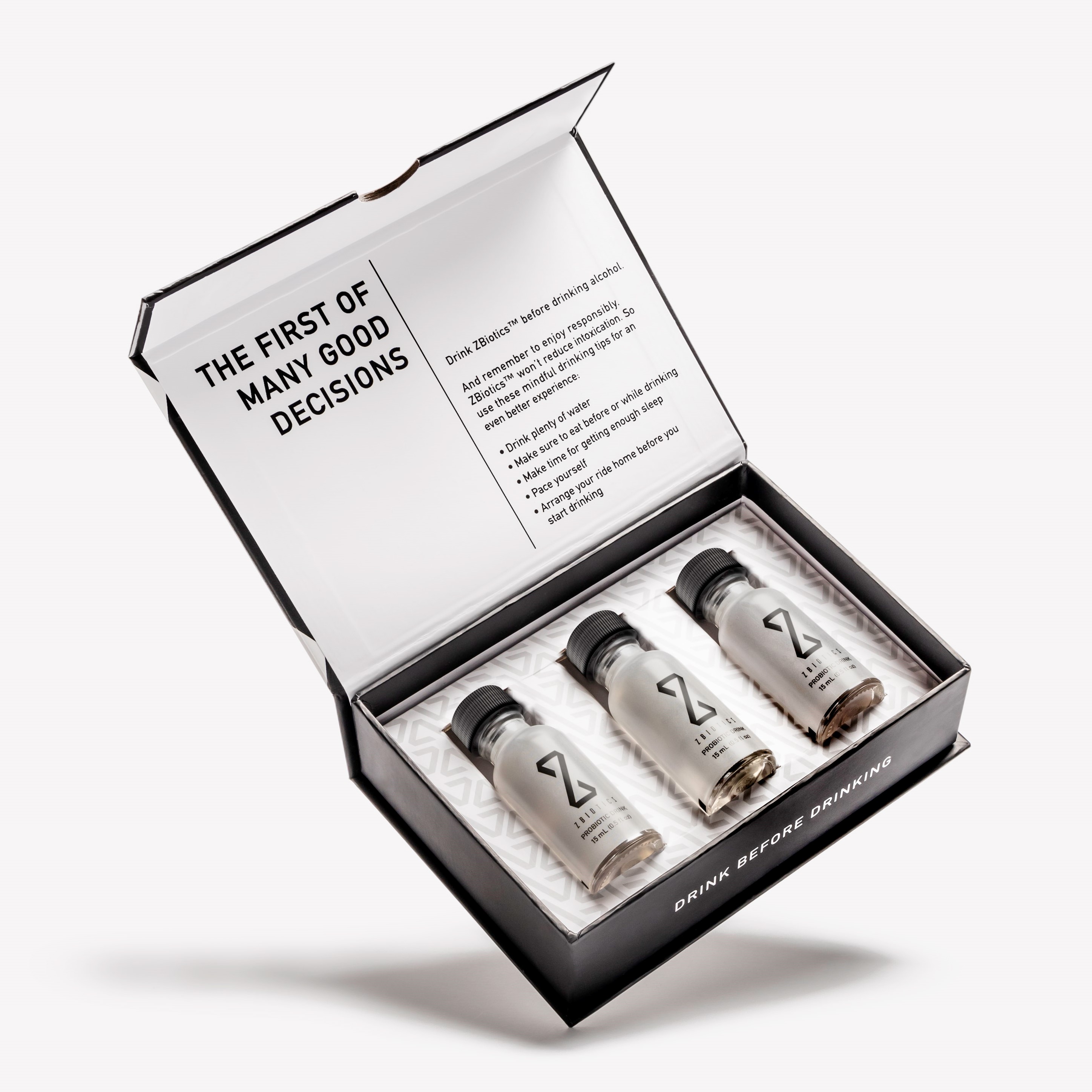 Zbiotics are the first genetically modified probiotic.However, ZBiotics found that you cannot place the enzyme directly in the body without it being destroyed in the stomach. The solution came in probiotics, which have naturally adapted through evolution to resist being digested. In addition, the selected bacteria B. subtilis had another useful evolutionary feature – the ability to pickup DNA and incorporate it into their own.

A new application for a billions-year-old process
While ZBiotics is blazing trails in the field of probiotics and functional beverages, it does not claim to use any new techniques. ZBiotics’ patented strain of probiotics, B. subtilis ZB183, was designed using homologous recombination, a process which has been used for decades to make cheese, insulin and veggie burgers.

Using homologous recombination, the company engineered B. subtilis to identify the DNA which leads to the breakdown of acetaldehyde in the liver and then replicate that process in its own DNA. “Bacteria have naturally evolved and refined over the last three billion years the ability to edit their own DNA on a continual basis,” Abbott tells NutritionInsight. 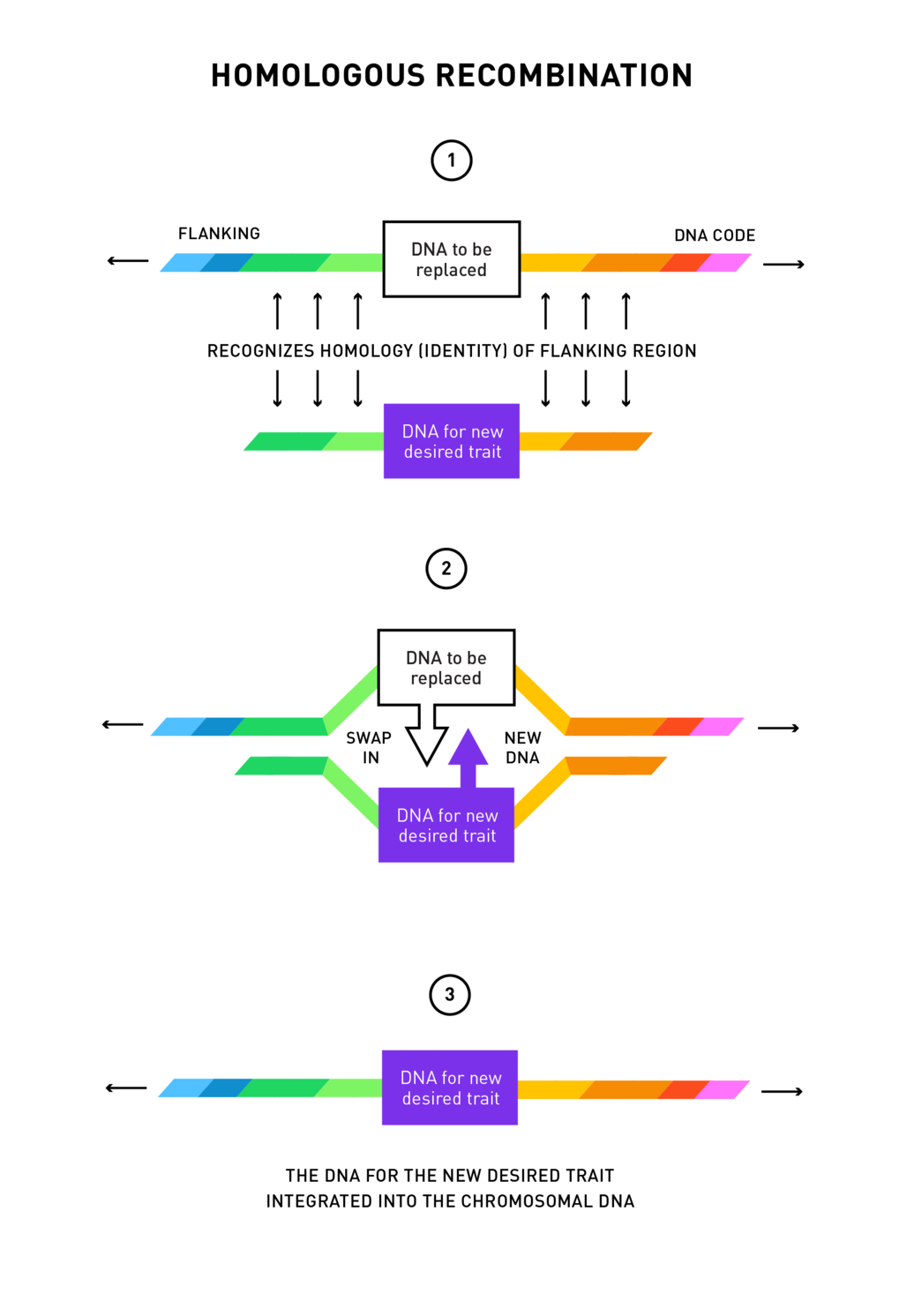 Flow chart illustrating homologous recombination.
ZBiotics is currently not required to label the product as a GMO. However, Abbott promises, “we absolutely will prominently label it as a GMO, because we are very proud of the fact that it is genetically engineered. The genetic engineering is what allows the bacteria to create an enzyme similar to the one your liver creates to break down acetaldehyde. No one has ever used this level of technology to address this challenge before.”

Abbott embraces advancements in genetic engineering for functional foods because he sees it as progress for our species. “Our environment and lifestyles have changed dramatically over the last few thousand years, and as it relates to biotechnology, we no longer have to wait for the next few hundred-thousand years for our anatomy to catch up,” he explains.

Nevertheless, Abbott recognizes that safety is a priority. ZBiotics spent two years testing the product for safety and efficacy before launching. “ZBiotics is fully FDA-compliant for safety and adheres to all regulatory requirements for sale in the US Our manufacturing is conducted in an FDA-registered food-grade facility according to Good Manufacturing Practices compliant with 21 CFR 117. It also means that our patented ZB183 ingredient has been extensively tested and is generally recognized, among qualified experts, as having been adequately shown to be safe under the conditions of its intended use,” he adds.

As functional beverages come on the market with bacteria “hacked” to meet our demands, what will it mean for the world of nutrition? Giving power to consumers to regulate their own microbiomes with the precision of enzyme-producing probiotics is a new paradigm we live in. “Whether they are promoting increased levels of nutrient absorption or helping break down environmental toxins, the enhanced probiotics we are building will provide consumers with new health-promoting functionalities that are only possible thanks to genetic engineering,” concludes Abbott.

ZBiotics is now available anywhere in the US from its website. The probiotics come in three, six and twelve-packs ranging from US$9-$12 per bottle.

This week in nutrition news, Rise Nation, a brand of science-based workout studios, partnered with CBD Move Free to introduce the CBD Move Free product that aids with... Read More

A pilot study on men published in the ACS Journal of Agricultural and Food Chemistry shows that beer positively affects gut microbes when consumed in moderation.... Read More