You are in : All News > Arla Foods Ingredients: GRAS approval for alpha-lactalbumin in infant formula 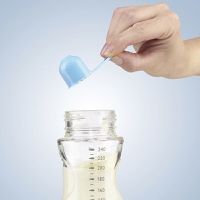 The FDA’s decision means Lacprodan ALPHA-10 is permitted as an ingredient in cows’ milk-based non-exempt formula for term infants at levels of up to 8.3g per liter. It will also allow Arla Foods Ingredients to supply fractionated whey protein concentrate containing 41 percent alpha-lactalbumin to the US infant formula market.

Due to its composition, the ingredient also makes it possible to reduce overall protein levels in a formula. This is widely considered desirable because, while more research is needed, reducing the protein concentration of formula has been suggested as a preventive strategy for cutting the risk of overweight and obesity in children. Other benefits associated with alpha-lactalbumin include a reduction in feeding-related gastrointestinal events, protection against intestinal infections and support for a healthy gut microbiota.

Click to Enlarge The ingredient also makes it possible to reduce overall protein levels in a formula.The FDA issued the company with a GRAS Notice known as a “no objection letter.” It states that it has no questions regarding the safety of fractionated whey protein concentrate containing 41 percent alpha-lactalbumin – marketed by Arla Foods Ingredients as Lacprodan ALPHA-10 – when used in infant formula.

“Lacprodan ALPHA-10 delivers safe and documented benefits when used in infant formula. This approval is a regulatory milestone in the U.S. It will benefit millions of babies by allowing them to consume clinically documented levels of bovine alpha lactalbumin,” says Kal Ramanujam, Senior Scientific Advisor, Pediatric, at Arla Foods Ingredients.

Lacprodan ALPHA-10 is a whey protein fraction with 41 percent alpha-lactalbumin and a high content of tryptophan, cysteine and 88 percent protein concentrate in dry matter.

NutritionInsight is reached out to Arla Food Ingredients for further comment.

In January, the company launched an “optimized comfort” whey-protein based concept for infant formula. The concept contains a blend of alpha-lactalbumin and whey protein hydrolysates which aims to reduce gastrointestinal discomfort problems in infants. Such discomfort is said to be one of the most common reasons for parents to switch between formulas.

45 scientific staff and 22 food and dairy technicians work to discover and carefully document the effects of our functional and nutritional ingredients. At application level, some 40 dairy technicians, scientists and engineers, work in well-equipped pilot plants to help our customers prepare these discoveries for success on their production lines and in the marketplace.

15 Apr 2021 --- Arla Foods Ingredients is partnering with public and private sectors in Denmark and Ethiopia to transform papaya waste and dairy ingredients into nutritious,... Read More