You are in : All News > UK and Australian consumers turning towards quick and stodgy food, surveys find 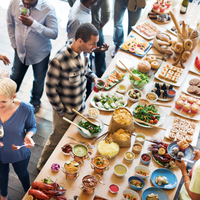 21 Aug 2019 --- Australians and UK consumers are favoring foods that are convenient and comforting – but not necessarily nutritious, according to two surveys. An examination of 1,000 Australian adults found that they are spending a third of their weekly budget on fast food, with young Australians being especially likely to prioritize food that is cheap and easy. Meanwhile, a separate survey of 1,003 UK residents found that 43 percent consume pizza at least once a week, with other popular options being spaghetti Bolognese and a Sunday roast, both of which were consumed on a weekly basis by 41 percent of respondents.

“The findings revealed the top three favorite meals in the UK are hearty, wholesome dishes. These are energy-dense dishes we’d classify as ‘comfort’ foods. They are often meals people would eat at home when they were children and therefore continue to eat them in later life. They are also very simple and quick to cook,” Gino Grossi, Marketing Manager at Leisure which carried out the survey, tells NutritionInsight. 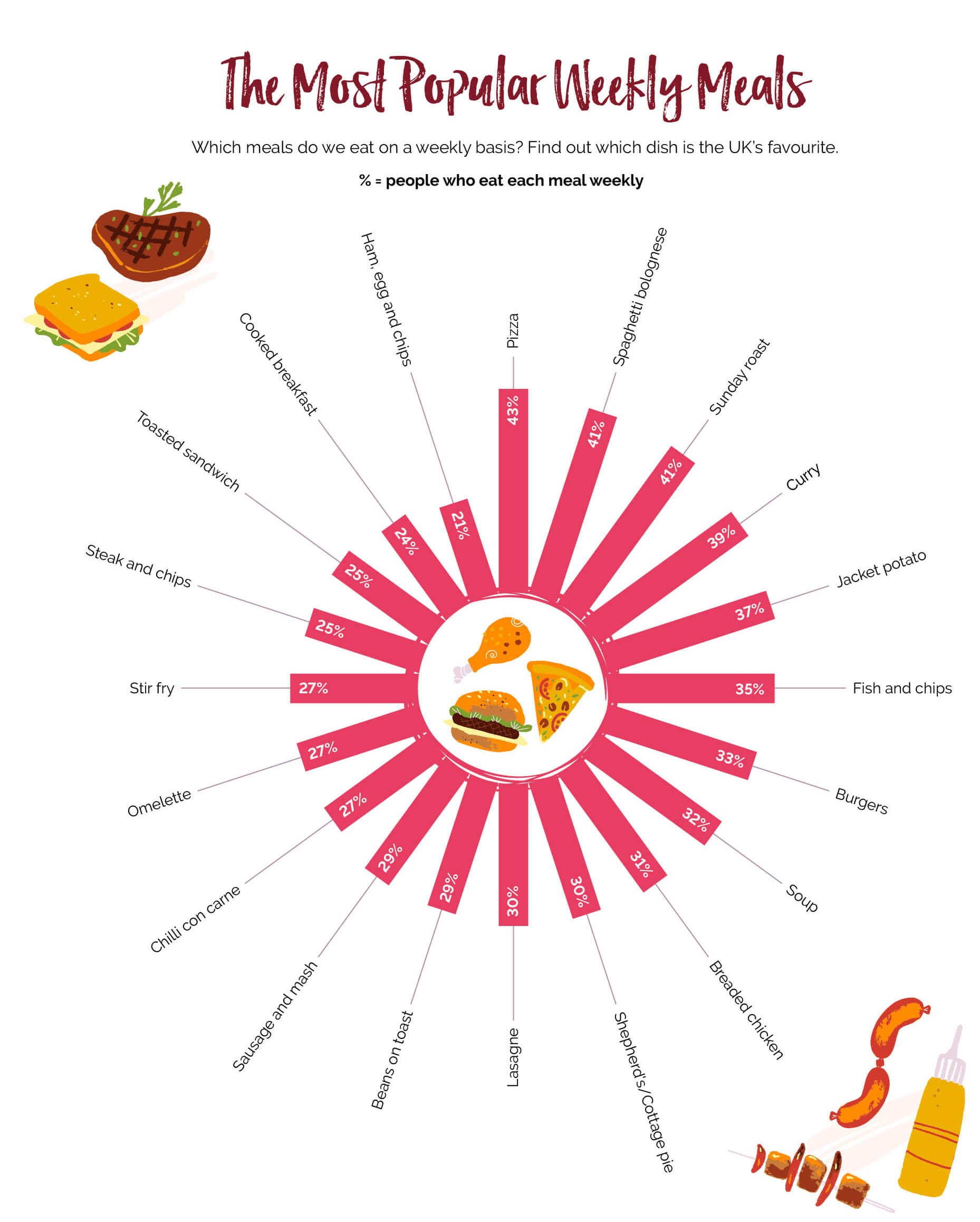 Click to EnlargePizza is the UK's most commonly consumed meal (Source: Leisure). This theme carries over Down Under, with NobleOak finding that 63 percent of respondents favor easy-to-purchase food, and 59 percent prioritize meals that are quick to cook. Additionally, those aged 25 to 34 years are the most likely to choose what they eat based on these reasons. Meanwhile, the 55+ group is more likely to prioritize healthy meals. In contrast, the UK survey found that younger people spend more time cooking than older generations. Britons aged 25 to 34 spent a mean of 57 minutes a day cooking, in comparison to just 42 minutes in the 55+ group.

Moreover, the research highlights that Australians are spending 32 percent of their weekly budget on fast food, with young people spending up to 38 percent of their budget on easily-prepared, processed food served as a quick or take-out meal. Tasmania is the state with the highest number of fast-food restaurants per capita, with 27 popular chains available for every 100,000 of the population.

Lack of diet-health link awareness
Another notable finding from Australia was that one in six respondents are unaware of the link between a poor diet and obesity. Overweight and obesity rates are rising, especially among school-age children and adults. Obesity can lead to a variety of serious issues, including insulin resistance, diabetes, and cardiovascular disease.

Additionally, over half of Australians did not know that a long-term unhealthy diet is linked to depression, types of cancer, a weaker immune system, kidney failure and early death. This may explain why 55 percent of Australians reported eating less than one portion of fruit or vegetables a day, with only 17 percent managing to eat five daily portions. 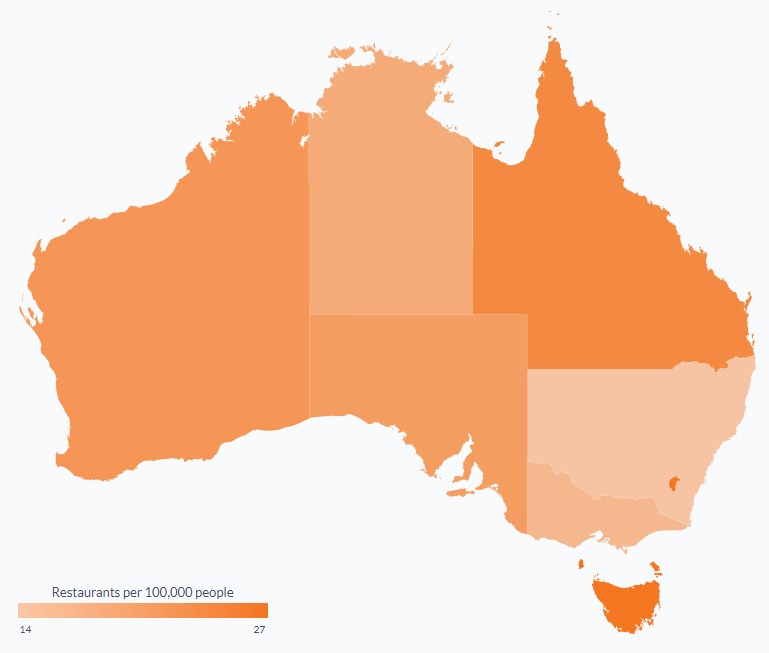 Click to EnlargeTasmania is the state with the highest number of fast food restaurants per capita (Source: NobleOak).

The link between diet and obesity has come under the spotlight in Australia in recent times. This week, state and federal ministers in Australia and New Zealand agreed to request that Food Standards Australia New Zealand review nutrition labeling for added sugars in beverages. They also noted that the option to quantify added sugars in the nutrition information panel best met the desired outcome. This could lead to sugary beverages, which have been directly linked with obesity in a number of studies, coming with warning labels akin to cigarettes.

International tastes
Despite the popularity of pizza and pasta, just 72 percent of UK respondents said that they had tried Italian cuisine, making it the second most widely sampled cuisine. Meanwhile, Chinese food was the most widely tried international offering, followed by Indian (69.5 percent), American (60.4 percent) and Spanish (50.4 percent). Ethiopian, Columbian and Peruvian cuisines were among the least tried cuisines in the UK, with less than 5 percent of respondents reporting to have ever tasted these foods.Click to EnlargeBelfast, Leeds and Brighton have the most adventurous foodies (Source: Leisure).

Belfast was found to be the most adventurous foodie city, with 56 percent of respondents from Belfast having tried 12 or more cuisines, followed by Leeds where 43 percent had tried the same amount. Paradoxically, Belfast was also the city with the highest proportion of people who had tried no international cuisine, at 39 percent.

“In order for us to group responses by city, respondents were asked to select the city they live closest to. This may mean that we gathered responses from those who live in the city, with great access to a mix of restaurants and varied cuisines, but also those who live further afield, who may have less diverse options when it comes to dining. It may also be the case that the UK has enjoyed a mix of cuisines for so long that they have integrated into our daily diets to the point that people may not see them as a different cuisine at all,” explains Grossi.

He adds that the study highlights that Britons eat a wide variety of foods based on cuisines in Europe, India and the rest of the world. “While we cannot assume that eating habits are different compared to those of Australia and the US, each country has different national favorite foods.”

20 Jul 2020 --- Beneo is preparing for the rise of health-conscious consumers to continue in the wake of COVID-19, predicting that this will play a key role in future product... Read More