You are in : All News > Vegums’ US gummy vitamin launch targets environment via veganism and packaging

06 Jan 2022 --- UK-based Vegums is bringing its vegan gummy supplements to the US, with three offerings: a multivitamin, omega 3 and iron. The launch is initially online only, but the company is also aiming to enter brick and mortar stores across the country.

“Sources vary, but it is thought that over 50% of the US population take supplements regularly,” co-founder John Rushton tells NutritionInsight.

“There are over 10 million vegans in the US, and this number is rising dramatically every year, not to mention the huge movement toward a plant-based flexitarian diet. So the market is already big but rapidly growing,” he continues. Rushton hopes that Vegums will help raise awareness in the vegan and plant-curious communities.

Differentiation in a crowded market
Rushton also argues that while there are lots of supplement options on the market, Vegums stands out with its vegan-friendly credentials.

“All Vegums ingredients are sustainably sourced and have been traced back to their source to ensure that no animal products were used at any stage. What else stands us apart from the rest is our packaging is 100% biodegradable, further supporting a vegan lifestyle.”

Co-founder Abdul Sharief elaborates that the products come in cellulose and recycled cardboard, designed to be stored in our custom reusable tin.

“We will not contribute to landfill waste. Importantly, in the UK, Vegums has achieved carbon-negative status; we aim to do the same in the US. We know it’s a big place, but we are ready for it, and by all accounts, the vegan population is ready for our products,” he continues.

Logistical delays
The launch had initially been planned for earlier, but global logistical issues meant it was delayed a few months. Other nutrition players have also been hit with supply chain issues, spurring a shift toward local suppliers.

Having now safely arrived stateside, the first of the three “Ve-ssentials” is a multivitamin containing vitamins B12, B6, and D3 plus folic acid, selenium and iodine – marketed as “everything you need and nothing you don’t.”

Although many plant foods are already rich in folic acid, Rushton says it is added as a “safety net,” as it is recommended that all women of childbearing age (who make up a large portion of the vegan market) supplement with folic acid daily. “It is water-soluble, so any excess will be flushed away in urine.”

In September, the nutrient was in the spotlight as the UK government suggested adding it to UK flour to help prevent spinal birth defects in babies.

Rushton also notes that selenium is mainly found in meat and dairy products. “Although it is present in some grains and nuts, it can be difficult to get enough for a typical busy vegan.”

Omega 3 and iron offerings appeal to families
Vegums is also offering a fish-free omega 3, sourced from marine algae. It provides 80 mg DHA per daily dose. They have the natural sweetness of oranges and are absent of the fishy taste.

“Omega 3 is very popular in the UK, especially with the child and family market due to the huge benefit on brain development,” says Rushton.

“It also has many other benefits such as supporting eye health, fighting anxiety and depression, as well as well-documented cardiovascular health benefits. These all make it a very popular product, especially given that almost all other forms of omega 3 taste awful.”

Finally, the company is rolling out blackberry-flavored iron-rich gummy bears. A daily dose of two per day results in 14 mg of easier-to-absorb ferrous iron, helping to prevent anemia.

“Iron is mainly taken by women of childbearing age as they are most vulnerable to iron-deficiency anemia, which is very common, resulting in tiredness, lack of energy and poor skin or hair health. But anyone can become iron-deficient, especially when removing all meat and dairy from their diet,” says Rushton. 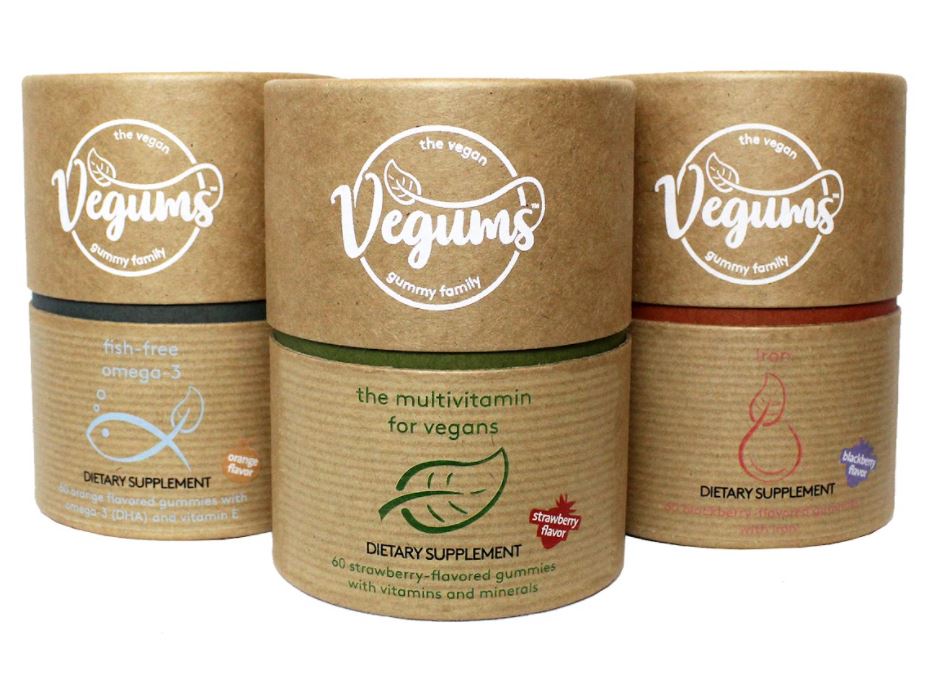 All Vegums products come in biodegradable cellulose and recycled cardboard.

Marrying clean label and vegan trends
All of Vegums’ vitamin gummies are certified by the Vegan Society and feature easily understandable ingredients.

Citrus peel is used as a gelling agent as opposed to animal-based gelatin. Natural colors and flavors are always employed, and where sweetness is required, it is with unrefined cane sugar to avoid the use of bonemeal common in refining.

“There are so many benefits to following a vegan diet, but it can be easy to fall short of some important vitamins and minerals,” says Dr. Nicole Avena, a research neuroscientist, author and expert in the fields of nutrition, diet and addiction.

This has been spotlighted this Veganuary, with researchers calling attention to a “quiet epidemic” of vitamin B12 deficiency.

“A supplement optimized for vegans could target these nutrients that vegans are likely missing out on, and help someone following a vegan diet feel secure knowing that they aren’t lacking important vitamins and minerals they need to stay healthy,” concludes Avena.

By Katherine Durrell, with additional reporting by Missy Green

TopGum Industries has invested US$30 million in the construction of a gummy supplement facility. Construction is already underway for the 11,000 square meter facility... Read More

Blendhub and Nucaps have teamed up to develop personalized functional ingredients for the nutrition and health industries. Blendhub operates a multi-localized... Read More

Ancient concepts like “plants as medicine” are being given a 21st-century reinvention featuring technology like artificial intelligence (AI), as seen in... Read More