You are in : All News > Vegan foods could aid metabolism and ward off heart disease and diabetes, find studies

However, a Persona expert flags that nutritional considerations must be made before adopting plant-based diets

02 Dec 2020 --- Fresh evidence is pointing to the benefits of vegan foods for heart health, metabolism and gut health. An investigation into mycoprotein concluded that its structure may have a pivotal role in influencing the digestion of fats and carbohydrates in the upper gut, thus potentially reducing the risk of cardiovascular disease (CVD) and Type 2 diabetes (T2D).

Meanwhile, scientists behind a separate study finding plant-based diets can aid weight loss and heart health are calling on policymakers to actively promote the diet.

This study, from the Physicians Committee for Responsible Medicine (PCRM), was published in JAMA Network Open and followed 244 overweight individuals for sixteen weeks.

Half the participants were assigned a low-fat plant-based control diet while the other half continued to eat as per usual. Neither group changed exercise or medication routines unless instructed by doctors.

“The study not only showed that a plant-based diet helps people lose weight, but it showed exactly how it happens and the health benefits that can result,” Dr. Hana Kahleova, the lead researcher on the study, tells NutritionInsight.

Vegan diets were shown to reduce liver fat by 43 percent and increase after meal burn by 18.7 percent.Lipid tracking
The study authors enlisted Yale University researchers’ help to track intramyocellular lipids and hepatocellular lipids – the accumulating fat in muscle and liver cells – in a subset of participants using magnetic resonance spectroscopy.

Those in the plant-based group reduced the fat inside the liver and muscle cells, while the control group did not experience significant changes. Fat stored in these cells has been linked to insulin resistance and T2D.

“Policymakers should prioritize the health of the people they serve by promoting these healthful plant-based foods, which can not only lead to a healthy weight but also improve cardiometabolic risk factors. In addition to the health benefits, it’s cost-effective and beneficial for the environment,” affirms Kahleova.

A feasible diet in the long-term?
While the results purport to show remarkable benefits for overweight individuals switching to a plant-based diet, there are considerations to be made before drawing concrete conclusions.

For example, the time used in collecting data and the diet prescribed to participants are “significant flaws,” according to Carielle Nikkel, vice president of nutrition support at Persona Nutrition and who was not involved in the study.

She tells NutritionInsight that there may be issues with the longevity of the diet used in the study.

The intervention group was instructed to consume a plant-based diet with about 75 percent of energy from carbohydrates, 15 percent protein and 10 percent fat.

Nikkel also flags concerns about long-term consumption leading not only to micronutrient gaps, but also blood sugar or hormone dysregulation and lack of satiety for clients.

“I wonder if similar outcomes could be found through a plant-based diet paired with caloric restriction and a higher fat and protein macronutrient profile,” she comments. 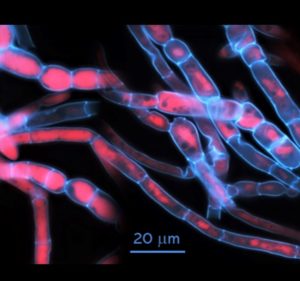 Another study has reaffirmed the benefits of mycoprotein in reducing the risk of CVD (Image credit: Raffaele Colosimo, NRP Library).With the seeming difficulty of obtaining the correct nutrients when eating a plant-based diet, a study recently reaffirmed the benefits of mycoprotein – a meat replacement ingredient used in Quorn – in reducing the risk of cardiovascular disease (CVD).

Set to be published in Food in Function, the study shows mycoprotein can reduce insulin release after meals, lower cholesterol and blood lipids, hence reducing the risks of CVD and T2D.

These two digestive mechanisms, the study suggests, may explain the reduction in blood lipids and cholesterol caused by mycoprotein seen in previous clinical trials.

Similar findings by the authors in another study also showed a reduction in the digestion of carbohydrates after mycoprotein consumption. This may be due to mycoprotein’s structure and its ability to bind and retain the enzyme alpha amylase within its cell walls.

Both sets of findings show the process by which mycoprotein can help fight diseases like T2B and CVD.

These findings join a plethora of results showing mycoprotein’s benefits as an animal protein replacement for vegans.

This year, Quorn revealed that consumption of mycoprotein could drop cholesterol levels by 19 percent.

Last year, a University of Exeter study found mycoprotein can stimulate post-exercise muscle building to a greater extent than milk protein. The findings subsequently led to an increase in interest in Quorn products for athletes.

Plant-based diets under fire
These latest investigations add to the debate surrounding the potential benefits and risks of vegan lifestyles.

Research published last week appeared to show followers of plant-based diets were, over time, up to 43 percent more likely to suffer bone fractures.

Nikkel of Persona suggests veganism must be complemented with proper supplementation to avoid compromising one’s health.

“When it comes to plant-based consumption, the key is to be intentional about getting the crucial micronutrients that animal products provide. I recommend individuals following plant-based diets take an omega 3 supplement and multivitamin with bioavailable B vitamins.”

“I also recommend that they get their vitamin D and iron levels checked and supplement them, if necessary. These nutrients are typically lacking in a vegan diet and can affect the absorption of other nutrients,” she explains.

A study published in Nutrients has investigated the relationship between mortality from pancreatic cancer and consuming sugar and artificially sweetened beverages such... Read More