You are in : All News > US clinches deal to import infant formula from Australia

US clinches deal to import infant formula from Australia 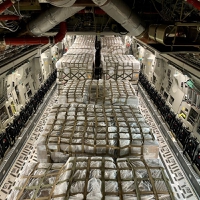 30 May 2022 --- Bubs Australia has clinched an agreement with the US to ship 27.5 million bottles of infant formula, according to President Joe Biden. In a Twitter post, he said everything was being done to get more formula on shelves as soon as possible, as the country faces an acute shortage.

The problem has reached alarming rates, with empty shelves across the country and parents increasingly scammed across online platforms. Price gouging has proliferated as the black market has lured numerous sellers and buyers alike.

“I’ve got more good news: 27.5 million bottles of safe infant formula manufactured by Bubs Australia are coming to the US. We’re doing everything in our power to get more formula on shelves as soon as possible,” Biden tweeted.

According to the US Food and Drug Administration (FDA) Bubs Australia plans to provide at least 1.25 million cans of several varieties of its infant formula, such as stage 1 and 2 cans of Bubs Organic Grass Fed, Bubs Supreme A2 Beta-Casein Protein and Bubs Easy-digest Goat Milk, that will make at least 27.5 million full-size, 8-ounce bottles.

Bubs Australia reassured Australian customers that its infant formula supply would not be affected.Getting imports ASAP
Some of the products are currently in stock for transport, and additional items are being produced in the coming weeks and months, the FDA notes.

“The US Department of Health and Human Services is evaluating options for getting the products to the US as quickly as possible.”

The FDA has notified Bubs Australia that the agency is exercising enforcement discretion for the import of certain infant formula products following the review of information provided pertaining to nutritional adequacy and safety, including microbiological testing, labeling and additional information about facility production and inspection history.

Ramping up production
At the same time, Biden announced he was invoking the Defense Production Act for the third time in less than a week to help Cargill deliver the materials needed to maximize the production of infant formula.

“We’re using the full power of the federal government to ramp up production and increase supply.”

The FDA also reassures it is carrying out discussions with manufacturers and suppliers regarding additional supply. The efforts aim to ensure adequate infant formula supply is available wherever and whenever parents and caregivers need it.

Already, a number of companies are importing products to the US including Danone and Nestlé. Under the Defense Production Act, aircraft such as military planes are being used to airlift the supplies to the US.The FDA continues to advise against making infant formulas at home or diluting formula.

Corporate greed?
Lawmakers have slammed the FDA accusing the body of prioritizing industry and corporate greed over the good of the public. The FDA’s commissioner Robert Calliff in particular was grilled over the agency’s delay in responding to a whistleblower who months ago revealed a series of poor safety practices at Abbott’s Sturgis facility.

Following the death of two infants and a number of hospitalizations, Abbott recalled products manufactured at the facility. A subsequent FDA investigation revealed damning observations, including the absence of a process control system that could ensure infant formula does not become adulterated. Five environmental subsamples were positive for Cronobacter sakazakii.

With Abbott being one of the four key manufacturers in the country, the factory’s closure heightened supply shortages across the country, worsening supply chain issues.

Nonetheless, Abbott is set to reopen its facility following an agreement with the FDA, while the US Federal Trade Commission is launching a public inquiry on how the infant formula industry has become so concentrated.

The US produces 98% of the baby formula for its population, limited to a pool of four main manufacturers – Abbott, Mead Johnson Nutrition, Nestlé and Perrigo.