You are in : All News > Probiotic and postbiotic platforms expand, boosted by potential for pharma and functional foods

Probiotic and postbiotic platforms expand, boosted by potential for pharma and functional foods

16 May 2019 --- Widespread interest in gut health platforms is growing and clinical research continues to place the microbiome at the heart of the health conversation. Probiotics are prominent in this space, but further categories are also evolving – such as postbiotics. Although still in its infancy, research is now beginning to understand the relationship between prebiotics, probiotics and postbiotics, and how they may impact health in their own unique ways. A core focus now, from a research standpoint, is investigating the microbiota and trying to identify key markers in the hopes of preventing and diagnosing health problems.

In the US, 73 percent of consumers are aware of probiotics and 80 percent of these people are aware that they can support digestive and immune health, according to a Kerry consumer survey from 2017. An array of probiotic products have hit the shelves in recent years, and Innova Market Insights reports that there has been a more than 40 percent rise in NPD when global launch numbers with a probiotic claim are compared from 2012 to 2017.

“With the rapid growth of the probiotics market, consumers are becoming increasingly aware of the role of a healthy digestive system in promoting overall well-being. Evolving areas of research are leading manufacturers to develop new products to respond to wider consumer needs,” Morgan Laloux, Business Development Manager Consumer Health & Nutrition, Lonza, tells NutritionInsight.Click to EnlargeThe popularity of these gut-boosting products is based on whether their positive health benefits come with strong scientific backing.

Increasing NPD activity has, however, sparked concerns about transparency and quality on the market. Members of an expert panel convened by the US Pharmacopeia (USP) published a paper earlier this month calling for more quality assurance for consumers purchasing probiotic products.

The popularity of these gut-boosting products is based on whether their positive health benefits come with strong scientific backing. Furthering their “health-halo” with new research which can enhance efficacy is now under the spotlight.

“Research is now focused on and investigating the microbiota, trying to identify markers in the hopes of preventing or in the diagnosis of health problems and diseases,” Bérengere Feuz, Marketing Director, Lallemand Health Solutions, tells NutritionInsight.

Postbiotic opportunities?
New doors may be opening for postbiotics. “Until lately, postbiotics were considered to be the waste of probiotics. Because, as far as scientists could determine, when probiotics were metabolized, postbiotics were produced and it was thought that these cultures were absorbed into the digestive tract,” says Feuz.

However, new research is starting to demonstrate that probiotic metabolites could be key regulators of gastrointestinal (GI) health, decrease inflammation and help maintain intestinal homeostasis, she explains. Because of these abilities, postbiotics may be a smart alternative to the use of whole bacteria in a probiotic form.

“Research has shown that specific probiotic bacteria produce many types of those postbiotic compounds,” explains Feuz. These include lactic acid, which optimizes the acid/base balance in the GI tract to suppress the growth of pathogens. Click to EnlargePostbiotics have reached commercialization-ready applications within the personal care space

“As well as short-chain fatty acids which play an important role in various metabolic pathways, antimicrobial peptides that suppress the growth of bad bacteria in the microbiome and carbohydrate-active enzymes that allow probiotic bacteria to digest fibers to produce postbiotic compounds [are of interest],” Feuz notes.

Postbiotics have reached commercialization-ready applications within the personal care space, with the launch of Sabinsa’s LactoSporin cosmeceutical ingredient.

“While LactoSpore is a spore-forming probiotic and shows good resistance against heat or pH, its probiotic metabolite has topical properties not seen in probiotics. LactoSporin has now been patented for variety of benefits,” Anurag Pande Ph.D., VP Scientific Affairs, Sabinsa, tells NutritionInsight.

LactoSporin is purified from the culture supernatant of the probiotic strain B. coagulans MTCC 5856 (LactoSpore) by a patented process, with the International Nomenclature Cosmetic Ingredient (INCI) name Bacillus Ferment Filtrate Extract.

Building up the probiotic base
Aside from novel and emerging postbiotic avenues, research is also steaming ahead within the established probiotic space. New species have even come to the fore, such as Akkermensia, or Christensenella. However, Fuez notes clinical studies still need to confirm their benefits.

“Specific challenges relating to the use of these new probiotic bacteria include the ability to be able to produce them as they are full anaerobes. Challenges also exist from a regulatory perspective. They need to be accepted by local health authorities,” Fuez adds.

Click to EnlargeThe probiotic space is also gaining ground through notable investments. Microbiome start-up Vedanta Biosciences – developers of a new category of therapies for immune-mediated diseases using live human microbiome-derived bacteria – raised an additional US$18.5 million in its third round of financing this week, bringing the total to US$45.5 million.

The funding will be used to advance Vedanta’s clinical studies supporting its portfolio, which includes the company regards as the most extensive collection of human-gut associated bacteria for use in the clinical treatment of diseases.

Vedanta specializes in the identification and cultivation of human commensal bacteria that induce a range of immune responses, including regulatory T cells, CD8+ T cells and Th17 cells, among others. Vedanta has worked with these biological insights to generate a pipeline of treatment programs for infectious diseases, autoimmune diseases, allergies and immuno-oncology.

“Our platform has the potential to address broad medical needs, including the treatment of drug-resistant infection, food allergies and other immune-mediated conditions where current approaches fall short,” says Dr. Bernat Olle, Co-Founder and CEO of Vedanta Biosciences.

“This financing will enable us to continue to advance defined bacterial consortia as a new modality, including generating clinical readouts in multiple therapeutic areas,” he adds.

Lonza’s Capsugel range of capsules, for instance, offers non-animal, hypromellose (HPMC) alternatives to gelatin, with vegetarian capsules such as Capsugel DRcaps and Vcaps.

Tests have shown that Lonza’s Capsugel portfolio can enable moisture-sensitive ingredients, such as probiotics, to benefit from a longer shelf-life. “The vegetarian capsules have a three-fold lower moisture content than gelatin, with Vcaps capsules having a low water content of 3 to 9 percent in ambient conditions,” Laloux explains. “Capsugel DRcaps modified release capsules, on the other hand, have unique polymer properties, which are designed to protect acid-sensitive ingredients, like probiotics, from full release and disintegration in the stomach, allowing for complete dissolution in the intestines,” he notes.

Meanwhile, Anlit highlights that the inherent sensitivity of probiotics raises two key challenges of maintaining stability and extending shelf life in the development of an effective supplement. To address these challenges, the company launched a technology last year, which it calls “ProBites LLP, Long-Life Probiotic” – touted as allowing for the high stability of live bacteria in ambient conditions, to be incorporated into a flavorful format and enjoyed at home or on-the-go.

Manufacturers must also consider the interaction of probiotics supplement products with other actives, which can be detrimental to the combined performance. 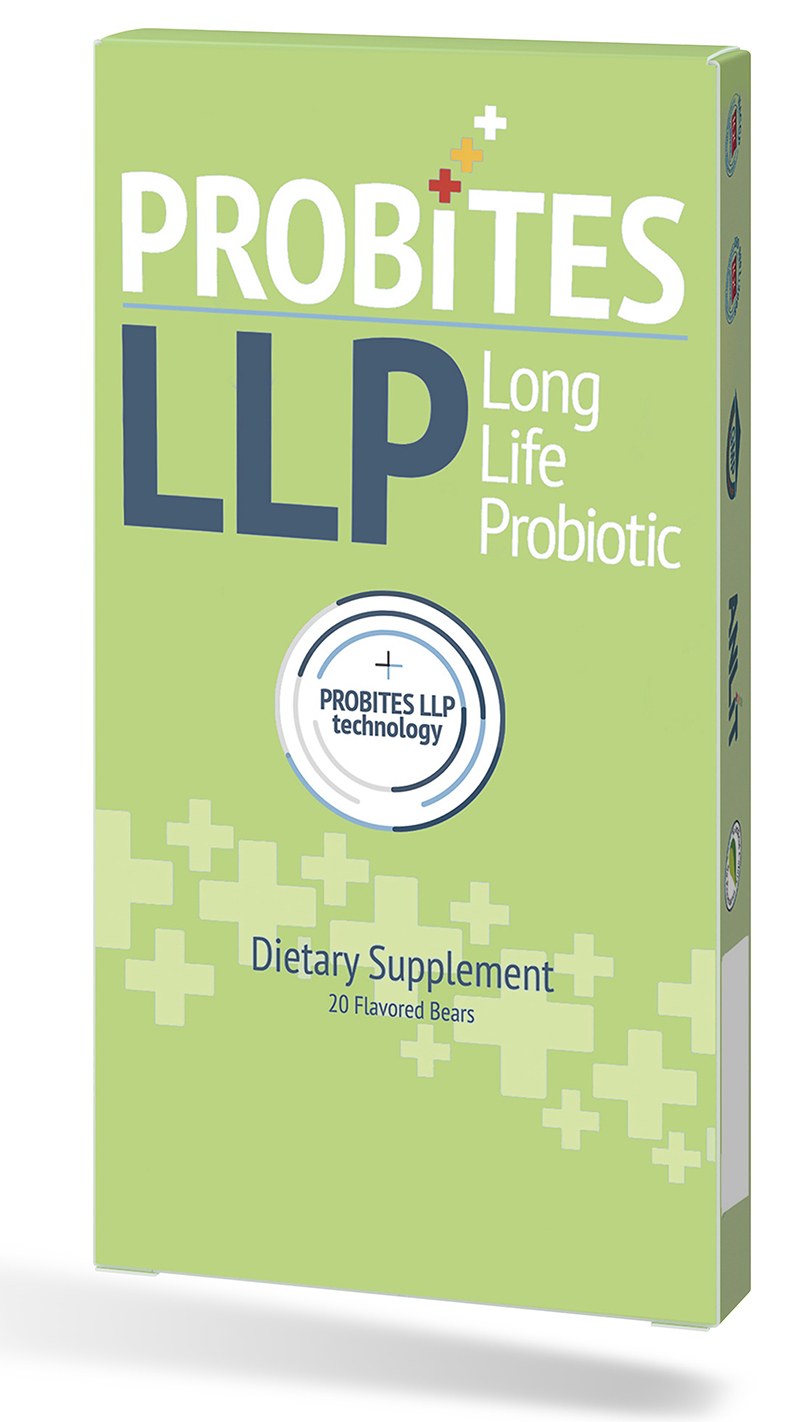 Ayanda, the European branch of global nutraceutical company Sirio Group, has created an innovative softgel capsule that can contain both active probiotic bacteria and omega 3. Softgel capsules are usually made at high temperatures, a factor that can inhibit high probiotic concentration. Ayanda has secured European patent accreditation for the novel dosage solution, which adds to the company's existing probiotic capabilities in hard capsules, tablets and powder sticks.

Ayanda spent ten years developing a gentle approach in encapsulation that raises the survival rate of probiotics. The innovation enables the manufacture of softgel capsules comprising uncoated probiotic bacteria alongside at least one oil – e.g., fish oil with DHA and EPA and vitamins in one single softgel.

“The correct choice of delivery system is vital to ensure optimal probiotics performance – Lonza’s Capsugel DUOCAP technology, for instance, constitutes a smaller probiotics pre-filled capsule inserted into a larger liquid-filled capsule with other active ingredients into an innovative combination product.”

“This patented capsule-in-capsule technology is also a great solution for moisture sensitive compounds, as depending on the formulation in the outer capsule it can block potential water absorption in the inner capsule where the probiotics reside,” says Laloux.

What’s next?
As knowledge around the microbiome continues to expand, boosted by ongoing clinical research in the area, there is ample space for NPD activity.

“Now probiotics, such as LactoSpore, are no longer limited to the digestive health aisle, but are included in products related to sports nutrition, cognitive health and women’s health,” says Pande.

In this way, probiotics are expected to expand beyond the chilled foods categories, such as yogurts, over the next few years. New strains of probiotics, such as Bacillus coagulans GBI-30 and Bacillus coagulans MTCC 5856, are making more shelf-stable applications possible and resulting in their incorporation in pantry staples such granola, oatmeal, nut butters, soups and nutrition bars.

13 May 2021 --- Taking place from May 10 to 13, Vitafoods Insights Virtual Expo is putting the spotlight on mental performance, immunity and mobility. NutritionInsight speaks... Read More