You are in : All News > Olive oil consumption linked to decreased CVD risk and improved gut health

08 Aug 2019 --- The consumption of olive oil and its compounds is associated with numerous health benefits, including reducing cardiovascular disease (CVD) risk, improving inflammatory parameters and boosting gut health. This is according to a Federal University of Mato Grosso do Sul, Brazil, review published in Nutrients, which examines past in vivo animal and human trials. Olive oil is an excellent source of lipids and is associated with primary and secondary prevention of CVD outcomes, as well as improvement of the lipid profile and insulin sensitivity, increased oxidative stability, improvement of inflammatory markers, and control of arterial pressure. However, many of the mechanisms are still unknown, with researchers calling for further studies in vivo and in vitro.

The benefits are especially substantial in extra-virgin olive oil (EVOO), as the mechanical extraction method used for refined olive oil results in phenolic compound losses. These losses can reach up to ten times the total content of phenols compared with EVOO. However, the refinement process does allow for fatty acids to be preserved, which assures the same lipid quality as found in EVOO. 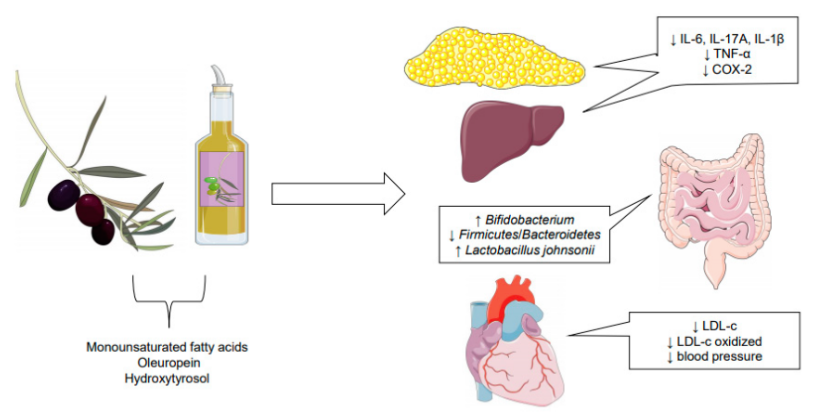 Aiding heart health
EVOO’s phenolic compounds act as antioxidants by preventing and reducing CVD by inhibiting lipid peroxidation caused by free radicals or metals. These phenolic compounds are also related to the reduction of mortality associated with cardiovascular diseases, mainly regarding heart attacks and strokes.

The consumption of EVOO also has an influence on blood pressure. Over 12 weeks of treatment, both systolic and diastolic pressures were lowered when compared to a diet with butter, which has a high content of saturated fatty acids.

Consuming EVOO can be used as a primary prevention method in people who have not developed CVD. People who consumed a Mediterranean diet (MedDiet) and EVOO showed a reduction in the risk parameters of developing cardiovascular disorders, such as inflammatory cytokine, the vascular cell adhesion molecule and intercellular adhesion molecule 1, and an increase in high-density lipoprotein.

MedDiet has previously been found to be beneficial, with researchers recently finding that it can help reduce weight gain during pregnancy and lower risk of gestational diabetes. It was also found to potentially prevent overeating.

Olive oil for gut health
Furthermore, the daily intake of HT at the dose of 50 mg/kg, increases the concentration of probiotic Lactobacillus, especially L. johnsonii. However, consuming EVOO itself is associated with a reduction of Lactobacillus, especially L. animalis, L. taiwanensis, and Lactococcus, which are microorganisms related to the weight loss of animals consuming EVOO.

EVOO consumption has been associated with aiding gut health, through the promotion of a higher intestinal bacteria biodiversity. Although the isolated mechanisms of how each fatty acid affects the microbiota, it has been generally observed that they exert different impacts on the microbiota. Additionally, polyphenols act as prebiotics by inhibiting the growth of pathogenic bacteria, such as E. coli, and stimulating probiotic bacteria, such as Bifidobacterium. Through improved gut health, EVOO also helps avoid metabolic dysfunctions such as obesity and insulin resistance.