You are in : All News > Mediterranean style diet may reduce prenatal weight gain and diabetes, study finds 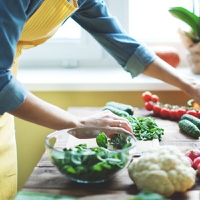 25 Jul 2019 --- Health benefits during pregnancy such as weight gain reduction and a lower risk of gestational diabetes may be the result of following a Mediterranean-style diet. Researchers from Queen Mary University and the University of Warwick have conducted an unprecedented study on the health effects of such a diet on high-risk, multi-ethnic, inner-city pregnant women. Because a quarter of mothers enter pregnancy with pre-existing obesity, chronic hypertension or raised lipid levels, this study may offer a means for pregnant women to prevent antenatal health risks.

“The results of this study demonstrate the impact that our Barts Research Centre for Women’s Health is having on women in London and beyond. These simple dietary changes are providing a real benefit for pregnant women with risks such as obesity and hypertension. The work also complements the strategic investment made by Queen Mary and Barts Charity in supporting women’s health research and will help us achieve our life sciences objectives in improving population health,” Professor Shakila Thangaratinam of Queen Mary University of London, tells NutritionInsight.

Published in the journal PLOS Medicine and funded by Barts Charity, the study was conducted within a 17-month time period in five maternity units in the UK (four in London and one in Birmingham), with over 1,250 inner-city pregnant women. It has demonstrated that in comparison to the control group receiving routine antenatal care, the pregnant women subjected to a Mediterranean style diet witnessed a 35 percent lower risk of developing diabetes and 1.25kg less weight gain both in pregnancy.

Professor Bassel Wattar from the University of Warwick and Queen Mary University of London, tells NutritionInsight, “the value of mixed nuts and extra virgin oil which are rich in a Mediterranean diet are known to provide healthy effects to reduce metabolic disease in the general population.” However, its impact has previously “not been evaluated in pregnancy.”

A new approach
Wattar notes that, “until now we did not know the effect of such a diet in high-risk pregnant women, and whether it could be culturally adapted for an ethnically diverse population. Now we know that pregnant women from an inner-city, high-risk, multi-ethnic population are able to adapt their diet to a Mediterranean-style and that this can bring them important benefits including a reduction in weight gain and a lower risk of developing gestational diabetes.”

The current UK-national guidelines for healthy diets neglect the Mediterranean diet’s essential ingredients in their recommendations, namely reduced consumption of red meat and processed meat, poultry and dairy, as well as foods rich in sugars and animal fats. Instead, a Mediterranean diet promotes nuts, unrefined grains and legumes, extra virgin olive oil, fresh fruits and vegetables, and a moderate to high fish intake.

Similar scientific investigations have previously been conducted regarding the effects of Mediterranean diets on reducing the risk of Type 2 diabetes and cardiovascular complications in the general population. The health benefits of the Mediterranean diet have previously been supported by several studies. Ranging from its use as natural and healthy alternatives to nutrition supplements, its effects on life-lengthening for the elderly, and its increase in positive health outcomes for those at risk of cardiovascular diseases.

Future research
Professor Wattar explains that the team plans to conduct follow up studies of the babies in the study to see if in utero exposure to nuts and olive oil has helped to reduce the risk of developing food allergies and asthma in childhood. The team is “ collaborating with a Spanish team from Madrid to conduct a pan European follow up study on this topic,” Wattar says.

“With the growing problems of diabetes and obesity in pregnant women, we’re so proud to support this study which looks at preventing these risks and in turn helping future generations”, Fiona Miller Smith, Chief Executive at Barts Charity, concludes.