You are in : All News > NHSc’s HMO blend deemed effective for babies allergic to cow’s milk protein

This is according to new data generated from the PLATYPUS study, which examined this “particularly vulnerable” patient population.

“CMPA impacts up to 3 percent of infants. Because of the fairly non-specific symptoms in infants with non-IgE-mediated, CMPA may be both over- and under-diagnosed,” Sue Jones, NHSc’s global medical affairs lead for Pediatric Allergy, tells NutritionInsight.

“The addition of two HMOs to an amino acid-based formula (AAF) prescribed for infants with moderate to severe CMPA was well-tolerated. This highlighted the safety of HMOs in this patient population,” adds principal investigator Michael Gold, a professor at the department of allergy and clinical immunology, University of Adelaide, Australia.

According to NHSc, the PLATYPUS study is the first to evaluate infants with moderate-severe CMPA being fed a hypoallergenic AAF supplemented with HMOs. The company notes that very few AAF are tested in the target moderate-severe CMPA patient population.The study examined Alfamino HMO, NHSc’s amino acid-based formula.

Promoting healthy growth
The data was presented at the European Academy of Allergy and Clinical Immunology (EAACI) Hybrid 2021 Congress.

It shows that the AAF, Alfamino HMO, following the addition of Nestle’s HMO blend of 2’FL and LNnT, is safe, promotes normal growth in babies and is effective specifically for those with moderate to severe CMPA.

Alfamino HMO is commercially available in a number of European, Middle Eastern and Latin American countries with further launches planned across the world.

“The PLATYPUS study provides further safety data for specialty hypoallergenic formula supplemented with our HMO blend to become the standard of care in formula-fed infants with CMPA. However, breastfeeding should always be supported when possible,” says Jones.

They concluded that it is safe, hypoallergenic, reduces the risk of respiratory tract infections, positively shapes the gut microbiome and supports normal growth in the wider population of infants with CMPA.

These studies also back up findings from another Nestlé-sponsored clinical trial with healthy infants fed a standard infant formula containing the same HMO blend. Then, it was shown to shift the gut microbiota closer to that of healthy breastfed infants, which was linked to fewer lower respiratory tract infections and lower use of antibiotics.

Further data on the microbiome and metabolome from the CINNAMON and PLATYPUS studies is expected in later this year and in 2022. 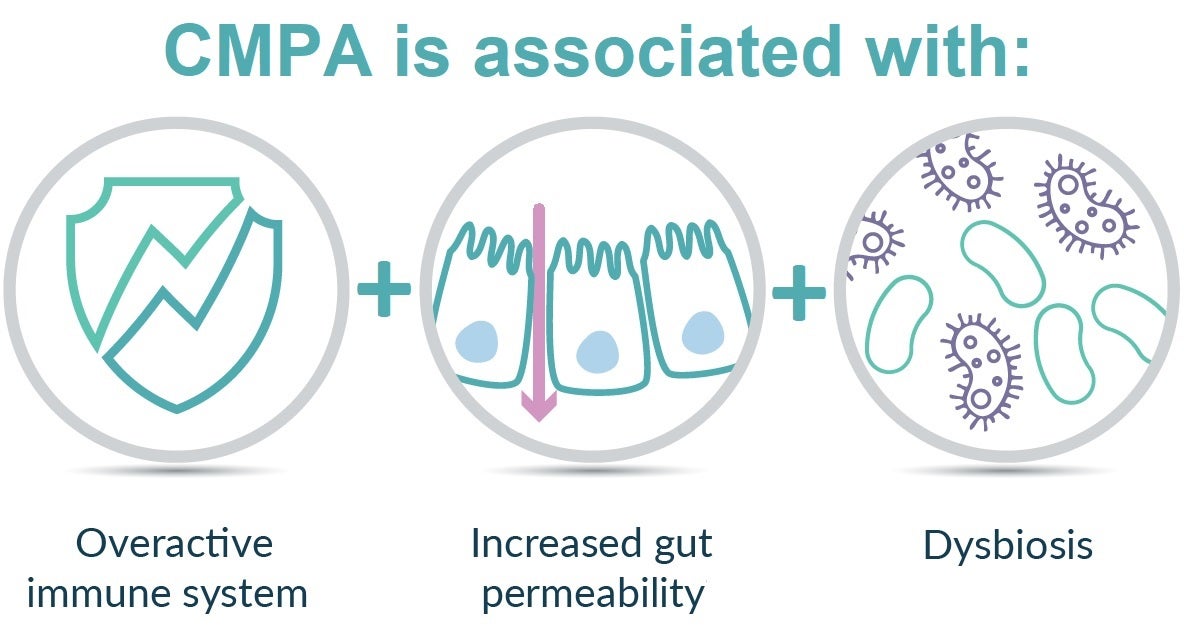 CMPA may also affect the digestive, skin and respiratory systems.

HMOs fight dysbiosis
The protective benefits of HMOs – which are the third-largest solid component in breast milk – have been recognized for several decades. However, the production of breast milk-identical HMO has only recently become possible, notes NHSc.

HMOs are potentially valuable components to support the most vulnerable with CMPA, which is an immune-mediated disease.

Symptoms may affect the digestive, skin, respiratory systems, as well as increased gut permeability and a disturbed gastrointestinal microbiota (dysbiosis). This is thought to delay immune maturation and contribute to a higher risk for infections.

In January, a study revealed that nine out of ten US infants might be suffering from a substantial deficiency in an important gut bacterium, leaving them at risk of infant gut dysbiosis.

The following month, Evolve BioSystems landed US$55 million for the commercialization of its “next generation of probiotic” tackling infant gut dysbiosis.