You are in : All News > Kappa Bioscience K2Vital receives vegan certification amid growing evidence of vitamin K benefits

16 Jun 2020 --- Kappa Bioscience’s vitamin K2 MK-7, K2Vital, can now address the lucrative vegan market thanks to its new certification. Sufficient vitamin K2 is difficult to obtain through the standard Western diet and this deficiency can be particularly pronounced among vegan consumers. This certification comes as the general benefits of various forms of vitamin K are coming under the spotlight, most recently with a study revealing that older adults with low vitamin K1 levels were more likely to die within 13 years compared to those whose vitamin K1 levels were adequate.

“Some K2 is produced by the body from vitamin K1 obtained from green leafy vegetables. However, just because a person may be getting plenty of K1, this does not necessarily translate to adequate K2. Most Western diets are considered K2 deficient and this is measured in a diet that typically contains meat and dairy, the primary sources of vitamin K2 in Western diets,” Jim Beakey, Communications Lead at Kappa Bioscience, tells NutritionInsight.

Vitamin K2, particularly in its most bioavailable form K2 MK-7, works by balancing calcium in the body and preventing the calcification of vessels and arteries, according to Kappa Bioscience. Due to its recognized importance for maintaining a flexible vascular system, vitamin K has also recently been highlighted for its potential in improving COVID-19 outcomes. 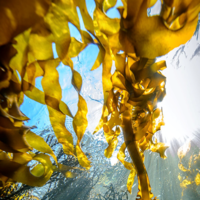 Ingredients from the sea can help bridge the nutrient gap.According to Beakey, concerns about deficiencies of certain nutrients lead many who follow a vegan diet to take nutritional supplements. Kappa Bioscience’s certification across the full K2Vital line, now provides vegan-certified, GMO-free product options to its product portfolio.

Beyond ingredients from the sea, industry is innovating to deliver the same nutrients and eating experiences to consumers who are turning away from animal-derived ingredients.

Other key vitamins that vegan consumers may supplement with include vitamin D, B12 and selenium, notes Beakey. “Vitamin K2 is a frequent co-ingredient with vitamin D because it helps regulate calcium for bone and cardiovascular health. Kappa’s certification helps ensure these consumers have vegan-approved vitamin K2 supplement options, with or without a vegan-approved D3,” he adds. Notably, K2 and D3 were recently found to amplify the effects of both.

The meta-analysis, involving nearly 4,000 US participants aged 54-76, one-third of whom were non-white, was led by researchers at the Jean Mayer USDA Human Nutrition Research Center on Aging at Tufts University (USDA HNRCA) and Tufts Medical Center and is published in The American Journal of Clinical Nutrition.

The research team categorized participants according to their vitamin K blood levels. They then compared risk of heart disease and risk of death across the categories over approximately 13 years of follow-up.

“The possibility that vitamin K is linked to heart disease and mortality is based on our knowledge about proteins in vascular tissue that require vitamin K to function. These proteins help prevent calcium from building up in artery walls, and without enough vitamin K, they are less functional,” says Kyla Shea, the study’s first author and scientist on the HNRCA’s vitamin K team.

While this study adds to existing evidence that vitamin K may have protective health benefits, it cannot establish a causal relationship between low vitamin K levels and risk of death because it is observational, note the researchers. Additional studies are also needed to clarify why circulating vitamin K1 was associated with risk for death but not heart disease.

In accordance with these findings, a study published in the British Medical Journal found that vitamin K2 has shown potential for lowering coronary heart disease (CHD) risk, while there is no association between intake of vitamin K1 and CHD. This was also an observational cohort.

The differences between types of vitamins can result in crucial differences, explains Beakey. "K1 is primarily involved in blood coagulation. Meanwhile, K2 is the required co-factor to activate osteocalcin for bone health and matrix Gla protein for cardiovascular health, among several other proteins."

Gnosis by Lesaffre study to test effect of vitamins K2, D3 and Empagliflozin on quality of life for diabetics

A new clinical trial aims to perform a large-scale investigation on the impact of combining the oral anti-diabetic medication Empagliflozin with vitamins D3 and K2. The... Read More

A spin-out of Cambridge University, Xampla has announced that its microencapsulation product is now ready to be brought to market. The product allows companies to... Read More

This week in nutrition news, the US Department of Agriculture (USDA) announced further actions to ensure accessibility to infant formula for all families in the nation.... Read More