You are in : All News > Industry watchdog flags “barebones” FDA review of Impossible Burger’s soy leghemoglobin 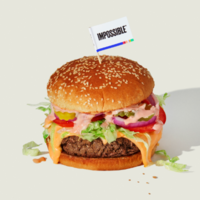 04 Sep 2019 --- The Center for Science in the Public Interest (CSPI) has criticized the US Food and Drug Administration (FDA) approval of soy leghemoglobin as a color additive in uncooked ground beef analog products, branding it “barebones.” The industry watchdog claims that the review excluded key endpoints well known to be associated with cancer risk and thus was inadequate under the law. From burgers to sausages and nuggets, meat-alternative products have flooded the market amid the rise in plant-based eating, also increasing the number of newer ingredients that may be consumed by millions of people.

Soy leghemoglobin is a protein that contains heme, a compound also found in red meat (specifically, in the myoglobin in red meat) and blood (in hemoglobin). The ingredient imparts a reddish-brown color but has already been used by Impossible Foods – developer of the plant-based Impossible Burger – as the “magic ingredient” to give an optimized beefy flavor. The ruling was important as it allows the company to now sell raw Impossible Burgers directly to consumers, instead of cooked via restaurants.

The FDA’s approval followed Impossible Foods’ 2018 petition to have the ingredient accepted as a color additive.

Speaking at the time of the review, Dennis Keefe, Ph.D., Director of the Office of Food Additive Safety in the FDA’s Center for Food Safety and Applied Nutrition, said: “We are in the midst of a revolution in food technology that in the next ten years will likely lead to more innovations in food and ingredient production than there have been in the past half-century. As these new products and ingredient sources come to the market, the FDA has a responsibility to provide the appropriate regulatory oversight to protect public health by ensuring that these new foods and food ingredients are safe.”

The “barebones” ruling is a “symptom of a much larger problem.  FDA’s broken system for evaluating new food ingredients hurts both consumers and companies who want to provide innovative alternatives,” Lefferts tells NutritionInsight.

CSPI notes that the ingredient may come with health concerns. According to the International Agency for Research on Cancer (IARC), an agency of the World Health Organization (WHO), there is “strong evidence” that heme contributes to the carcinogenic mechanisms associated with red and processed meats.

During the review process, Impossible Foods told FDA, “Once cooked and digested, both soy leghemoglobin and animal-based myoglobin release identical heme B molecules into the digestive system.”

CSPI has responded to this factor, saying that “FDA should have considered this issue and required testing to determine whether the heme in soy leghemoglobin could contribute to an increase in cancer risk. At a minimum, it should have determined whether soy leghemoglobin is associated with excretion of N-nitroso compounds, which is increased by heme and thought to play a role in meat-associated cancers.”

“The relevant safety question for additives – in contrast to naturally occurring substances – is whether they meet the applicable safety standard. Color additives, under US law, must satisfy a more stringent ‘convincing evidence’ standard for safety than other food additives.”

In its decision, FDA made no mention of its guidance on recommended toxicity testing for additives used in food.

“FDA’s guidance recommends long-term safety testing for additives like soy leghemoglobin, which fall in the agency’s highest ‘concern level’ category due to the extent of exposure. Instead, FDA relied heavily on a short-term (28-day) study, which provides no evidence of long-term safety,” says Lefferts.

Here to stay?
A plethora of meat alternatives are available on the market for increasingly meat-adverse or meat-reducing consumers.

“Plant-based dietary transformations are among the more powerful strategies in the fight against climate change and biodiversity loss, so long as the right tools are available for consumers. We know that giving up meat is actually a very big and difficult change for consumers. That’s why we’re creating delicious meat from plants that doesn’t require compromise on taste, nutrition, or culinary experience,” Rebekah Moses, Head of Impact at Impossible Foods, tells NutritionInsight.

However, another primary driver for consumers reducing their meat intake is health. Yet, many meat-alternative products on the market may not be as natural as consumers assume them to be. Burgers such as Beyond Meat and Impossible Foods are, arguably, highly processed and scientifically engineered. Both contain over 20 ingredients each.

“Although they may be better for the planet, many consumers are really surprised to learn that products like the Beyond Burger and the Impossible Burger are no healthier than beef burgers,” Lefferts says. “Meatless burgers served at restaurants generally aren’t any healthier from a nutrition standpoint than the meat versions. They may well be better for the planet, which serves our health in a different way. But, since companies profit from misperceptions that their products are healthier than they really are, I wouldn’t hold my breath waiting for them to set the record straight.”

But despite burgeoning health concerns, the space has caught the eye of heavyweight protein and meat companies.

Only last week, Cargill ramped up its interest in Puris, the largest North American producer of pea protein and a key supplier to Beyond Meat, with an additional US$75 million investment.

Clearly, the business side of the meat-alternatives space is booming. Innova Market Insights data shows that there has been a 45 percent average annual growth of food & beverage launches with a vegan positioning (CAGR, 2013-2017). New launches with a vegan positioning increased their market penetration in Europe from 1.5 percent in 2013, to 7 percent in 2017.

The nutritional profiles, as well as engineered profile of many of these ingredients, will continue to attract industry attention – and will surely be a space to watch.

NutritionInsight has reached out to Impossible Foods for further comment.

The US Food and Drug Administration’s (FDA) approach in attempting to remove dangerous supplements from the market appears to be ineffective, according to a new... Read More

Around three quarters of over-the-counter (OTC) topical cannabidiol (CBD) products in the US are inaccurately labeled, according to a study by John Hopkins Medical... Read More

The Council for Responsible Nutrition (CRN) deems the latest US Food and Drug Administration (FDA) draft on new dietary ingredient (NDI) filings as a paradox. Calling on... Read More