You are in : All News > Fooditive unveils digestion-friendly fiber sweetener from upcycled apples and pears 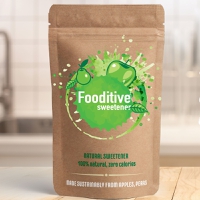 31 Jan 2020 --- In a move that could help address concerns around both sugar intake and food waste, Netherlands-based Fooditive has launched a natural sweetener produced from apple and pear leftovers. The allergen-free sugar substitute contains zero calories and is touted as having a clean taste, being digestion-friendly, as well as causing no tooth corrosion. The company highlights that this, in addition to being price-competitive, provides the sweetener applicability in foods, beverages and pharmaceuticals. The start-up has already attracted the interest of Rabobank and is quickly expanding.

“Its cool mouthfeel and non-cariogenic properties mean that Fooditive sweetener is ideal for dental products, as well as pharmaceutical applications. At this moment, we are working with a few companies in beverages, candy and jams, which will soon be in supermarkets for household use. It can also be used for pharmaceuticals, which we are working toward in the future,” Founder Moayad Abushokhedim tells NutritionInsight.

The sweetener is made using a fermentation process to extract fructose from apples and pears. This is then converted into a keto-fructose sweetener that tastes like sugar.

Last year, Fooditive was awarded Rabobank’s Innovation Loan and is now collaborating with Rotterdam Circulair, an organization that is dedicated to reducing, reusing and recycling waste and whose goal is to transition from a linear to a circular economy by 2030. Additionally, over €100,000 (US$110,300) was raised last year to set up a branch in Stockholm, Sweden. Future plans include expanding to the UK and Jordan, from where Abushokhedim hails. By starting production in these countries, Fooditive aims to reduce its carbon footprint and contribute to “an all-round better future.”

The sweetener complies with EU organic standards, which has led to Fooditive being awarded the Skal certification. This enables the company to also produce an organic sweetener alongside its regular variety. In 2019, Fooditive partnered with sustainable third-party production company Bodec, allowing the zero-calorie sweetener to reach consumers through products in Dutch supermarkets. This year, it will be further distributed to various food and beverage companies across the Netherlands.

Legislation such as the UK’s sugar tax on soft drinks has placed increasing pressure on industry to reformulate.A healthier alternative?
Abushokhedim explains that Fooditive sweetener is suitable for a wide range of uses. “This, therefore, contributes to the ever-increasing demand to reduce the sugar content in food and beverages such as soft drinks, dairy products and baked goods without losing the desired sugary taste.”

In recent years, legislation such as the UK’s sugar tax on soft drinks has placed increasing pressure on industry to reformulate. A recent study found that as a result, there has been a 29 percent reduction in the total amount of sugar sold in UK soft drinks between 2015 and 2018. However, there has been an average sugar reduction across food categories of just 2.9 percent.

“When we started developing our product, we were aware of the challenges that the sweetener market faces. These include cause functional dyspepsia and an unpleasant taste. Our high-digestive tolerance sweetener allows people to enjoy their favorite sweets with the same taste, without the worry. As it is actually a fiber, it can easily leave the body without causing any harm,” details Abushokhedim.

He adds that the sweetener does not affect blood glucose, and does not cause some of the problems that maltitol and sorbitol can present.

Sweeteners – and their safety – have been in the spotlight ahead of the anticipated release of draft guidelines on the intake of non-sugar sweeteners from the World Health Organization (WHO) Nutrition Guidance Expert Advisory Group (NUGAG).

Weighing in, Abushokhedim hopes that NUGAG will consider the sweetener industry’s role in creating a strategy to reduce overall sugar intake as well as calorie intake per day. “This strategy could reduce the risk and prevalence of obesity. It could also affect the ability to market a more sustainable sweetener industry that can save the environment as well as our health,” he concludes.

Amid concerns the UK government will scrap recently-introduced health and nutrition policies, researchers are increasingly worried the country is losing its focus on... Read More

Vitamin-rich sugar kelp poised to make waves in US market

Researchers at Uconn extension, College of Agriculture, Health and Natural Resources, are increasing the accessibility of the superfood seaweed. The team is looking to... Read More