You are in : All News > COVID-19 temporarily bolsters European interest in supplements

13 Jul 2020 --- Nearly two-thirds (62 percent) of French people are paying more attention to their health since COVID-19 hit Europe. This is according to a survey from Synadiet, a professional body representing over 90 percent of food supplement professionals in France. Meanwhile, research from FederSalus, an Italian association of health product manufacturers, reveals that while many companies were positively affected in March, this had already turned into a negative impact by April.

Synadiet carried out a two-part survey, with the first wave consisting of interviews with 1,023 French people, carried out in late January. Meanwhile, the second wave of the survey was carried out from May 19 to 20, and involved 1,018 French people.

This second survey revealed that 63 percent of French consumers are eating healthier, with 60 percent looking to strengthen their immune systems in general. While 53 percent of people seek to do this via better food and a better lifestyle, 36 percent are bolstering immunity through the consumption of food supplements and health products. Notably, one in two French people have reinforced their use of food supplements and natural health products, with 41 percent consuming more health products touted as natural. 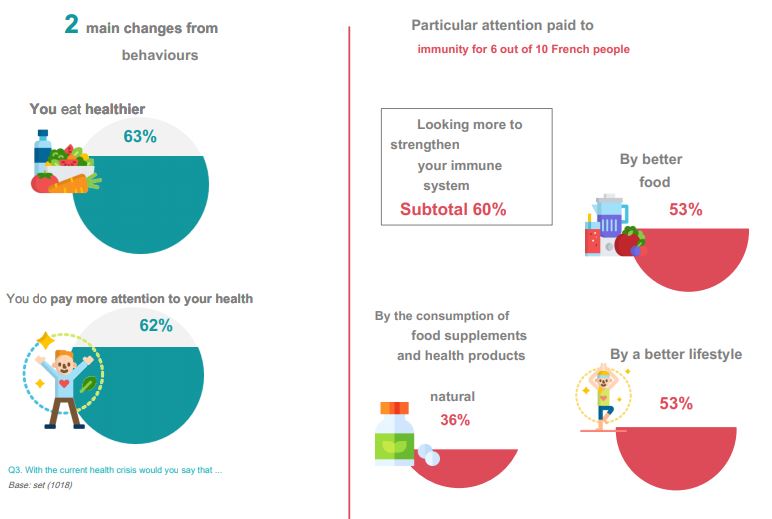 A global context
These findings roughly align with those reported by Innova Market Insights in its consumer survey carried out in late March. The market researcher revealed that around a quarter of French consumers were eating or drinking foods to boost their immunity, in comparison to the higher rates reported in countries such as the US (nearly 40 percent) and Brazil, Mexico, China, India and Indonesia, which were all at or above the 60 percent mark.

Additionally, European and US consumers have also increased their consumption of indulgent foods as people look for release and comfort. In Italy, the shift toward indulgent foods is almost as big as the shift to healthy eating. The market researcher also reveals that France is at the bottom for countries consuming more vitamins and minerals at just 16 percent. In contrast, 65 percent of Indonesia consumers are buying more, as are consumers in the US (27 percent), Italy (23 percent) and UK (19 percent).

Honing in on Italy specifically, FederSalus has released an overview of the country’s food supplement market for 2019-2020. Over this span, the market reached a value of around €3.6 billion (US$4.5 billion), marking nearly a 4 percent rise from 2018.

However, the association flags the role that COVID-19 played on turnover. In March 2020, the impact of the pandemic was neutral or positive for around two-thirds of companies, in comparison to March 2019. Notably, 35 percent reported a negative impact in May, but this rose to 65 percent in April 2020, when this trend reversed. This mixed picture has also been seen internationally, with vitamin retailer GNC declaring bankruptcy last month, while DSM’s Nutrition business noted a small increase in demand throughout Q1.

In terms of data from Italian pharmacies, vitamin C saw a whopping 238 percent growth in Q1 2020 in comparison to Q1 2019. Respiratory well-being also was bolstered by 75 percent, as were immunostimulants (65 percent), sleep and relaxation (27 percent), throat (12 percent) and B-group vitamins (11 percent).

- Jarrow Formulas has launched its Probiotic+ Gummies, a new product line targeting digestive, immune and gut health. This is the first time the company ventures its... Read More