You are in : All News > Carrageenans from red algae may affect mice immune systems, finds study

05 Jan 2021 --- Carrageenans, biologically active polysaccharides isolated from red algae, have shown an express effect on the immune systems of mice.

Research conducted by Russian and Lithuanian scientists revealed that adding carrageenans to the diet of lab mice for one week reduced the activity of their congenital immunity cells and dropped their leukocyte count.

“We have been studying sulphated polysaccharides isolated from red algae for several years and we found a number of pronounced biological effects using different models in vitro as well as in vivo. This paper is a continuation of our previous research.”

Assessing the “surpressants”
It is still unclear whether the effect is good or bad, says Kalitnik. Although the research team has established carrageenans can suppress the activity of peritoneal phagocytes (abdominal immune cells) in mice, they cannot confirm carrageenans are immunosuppressants per se.

“Usually, these diseases are associated with the hyperactivation of some parts of the immune system or with the reduced production or functional activity of immunosuppressive cells.” 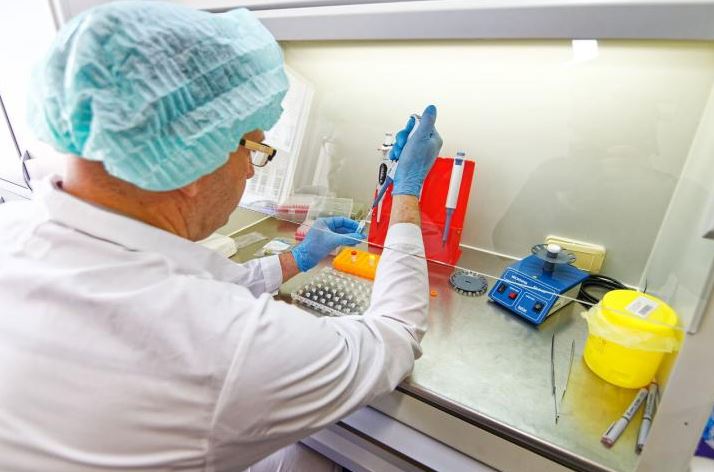 Click to EnlargeFEFU Center for Genomic and Regenerative Medicine (Credit: FEFU press office)Limited data on the mechanism of action
Because carrageenans of the red marine algae Chondrus armatus suppress phagocytotic activity of peritoneal macrophages, the researchers state this allows them to be viewed as pharmacologically active substances.

“The biological activity of high-molecular substances is largely determined by their structural features. Because of the high complexity of the macromolecular structure of these compounds, the data about the mechanism of their action are very limited,” Kalitnik explains.

“We also found in our previous research [the polysaccharides’] ability to bind receptors on phagocytic cells. Polysaccharides that are given orally manifest their immunological effects by acting receptors on immune cells located in the gastrointestinal  (GI) tract.”

Testing the polysaccharides in mice
In a weeklong feeding experiment, the researchers demonstrated that, with an exception of one, all carrageenan samples at 100 μg/mL increased cellular motility and dose‐dependently decreased phagocytic activity.

The carrageenans did not affect the mice’s clinical appearance, body weight, liver weight, spleen or thymus or development of noticeable changes to their inner organs.

“Too soon” for carrageenans as drug
Carrageenans are used throughout the food industry as stabilizers, thickeners or jelly agents.

According to Kalitnik, it is too soon to start thinking about developing a carrageenan-based immunosuppressive drug. The biological properties of carrageenans require further fundamental research that might take years.

The research team is planning to continue its research devoted to the pharmacological effects of carrageenans and their mechanisms once they secure additional funding.

“We would like to find out the way carrageenans influence cell receptors and signal paths that are involved in increasing and decreasing the leukocyte level,” she concludes.

“Such a study would help us better understand the potential of carrageenans as pharmacological substances or bio-additives that could reduce immune system hyperactivation.”

02 Jun 2016 --- Scientists have found that a type of commercial red algae could help counteract food allergies. The findings in mice are reported in the American Chemical... Read More

13 Apr 2016 --- Low-calorie, high-protein synthetic “popcorn shrimp” have been developed in San Francisco, but without the high carbon footprint.

20 Feb 2015 --- Nature’s Power Nutraceuticals (NP Nutra) is excited to participate for the 11th year in Engredea, the largest annual gathering of natural products and... Read More