You are in : All News > Unilever F&B ads will stop targeting children, health experts encourage others to follow suit

13 Feb 2020 --- Unilever will cease to directly target children in its food and beverage marketing and advertising across the globe by the end of this year. Leading the way is the multinational’s ice cream business Wall’s, which will carry a “Responsibly Made for Kids” promise. The pledge is based on the three pillars of being responsibly communicated, sold and developed. The move has been met with tentative applause from children’s nutrition experts, who note that these moves are encouraging for a society combating ballooning obesity rates.

“These principles are applicable for all of Unilever’s foods, beverages and ice cream products, but are most visible through the ice cream category. As a global ice cream maker, Unilever wants to support parents and kids to make good choices, especially in the challenging context of rise in childhood obesity, the impact of social media and the vast number of products to choose from,” a Unilever spokesperson tells NutritionInsight.

“We are very interested to see Unilever’s new marketing commitments. In the UK, the targeting of any non-broadcast marketing of products high in fat, salt or sugar is already restricted to under-16s, under the Committee for Advertising Practices code, while certain television and broadcast marketing has been regulated by [UK watchdog] Ofcom. We are therefore keen to understand in more detail how the Unilever commitments will build on existing regulation and push a higher threshold of industry norms,” says Ben Reynolds, Deputy Chief Executive of Sustain.

Unilever’s policy review will eliminate food and drink marketing to children under the age of 12 in traditional media, and those under 13-years-old via social media channels. The spokesperson explains that these ages were chosen due to research showing that from 12 years of age, children can articulate a critical understanding of advertising. Meanwhile the age threshold of 13 years of age for social media reflects the age gate that social media platforms already apply.

The company is also implementing strict controls concerning the placement and content of its advertisements.  This will involve reducing the audience threshold from 35 percent of children in the audience to 25 percent, which will help to further avoid advertising in programs for which children constitute a large part of the audience, states the spokesperson. Additionally, Unilever will not use any influencers, celebrities or social media stars who primarily appeal to children under the age of 12.

Notably, Unilever will also be limiting its use of cartoon characters to only products with a specific nutritional profile. This comes after a coalition of health groups last year called on the UK government to ban popular cartoon characters from being used on packaging to market unhealthy products to children. A survey had revealed that some products using popular TV and film characters comprised 99 percent sugar and half of all products surveyed were so unhealthy that they couldn’t be advertised on TV during children’s programs.

Clare Thornton-Wood, Registered Dietitian and BDA media spokesperson, tells NutritionInsight that marketing to children is currently widespread in the food and beverage industry. “It is also more likely to be associated with high calorie, energy-dense foods than healthier options. This marketing and attractiveness to children is found on packaging and across all forms of media. The Unilever initiative is not unique, but it is certainly one of the earlier adopters of this sort of change in marketing policy,” she states. 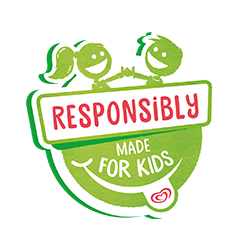 Click to EnlargeWall’s will introduce a “Responsibly Made for Kids” logo on its point-of-sale communications.Leading the way with ice cream
Wall’s ice cream will also undergo major changes, with its advertising shifting to speak to parents and caregivers. Unilever states that these are the people it feels should be the decision-makers when it comes to their children having a treat. By the end of the year, each ice cream in the children’s range will also have no more than 110 calories and a maximum of 12 g of sugar per portion, with the company working to improve this further.

Finally, as part of its “responsibly sold” pillar, Wall’s will introduce a “Responsibly Made for Kids” logo on its point-of-sale communications, such as product packs and price cards. Unilever says that this will indicate to parents and caregivers which products are designed for children, so they can make an informed choice when buying Wall’s products.

“We at Wall’s believe that everyone deserves a little joyous treat from time to time and we strive to offer something for everyone. Our promise is a genuine commitment to make and market products to children responsibly. It is the promise of better ice cream and healthier, happier children,” says Matt Close, Executive Vice President, Global Ice Cream Category at Wall’s.

Marketing loopholes?
Thornton-Wood believes the moves will be effective on two counts. “Firstly, the reformulation of ice cream for children will benefit overall health and obesity risk. Secondly, stopping active marketing to children – particularly alongside characters or personalities that could be seen as influential to children – will likely decrease children’s exposure to these products and potentially decrease their desirability.”

However, she flags that older children are still likely to consume products within the “adult” range, and without reformulation, these will contribute to obesity and health. “Nonetheless, it is encouraging to see that ‘incentives’ will only be linked to ‘Responsibly Made For Kids’ products. However, if consumed in excess, these could still contribute to obesity and poor dental health.”

“We look forward to hearing from Unilever about exactly how it intends to implement its new marketing commitments, what instructions it will give it agencies, and how it will self-police to ensure it is keeping to its commitments,” concludes Reynolds.

Marketing concerning children has been a controversial topic in recent years. Last week, a paper flagged that formula companies have quadrupled their spending on toddler milk marketing in ten years, which often feature unsubstantiated claims. Meanwhile, internal The Coca-Cola Company documents from 2013 and 2014 recently revealed how the beverage giant intended to use public relations campaigns to influence teenagers’ perceptions of the health risks of Coca-Cola products.

01 Jul 2021 --- Swiss-based Nestlé has maintained its number one position in Access To Nutrition Initiative (ATNI)’s Global Index – a ranking of food and... Read More