You are in : All News > Research on 'Healthiest' Cooking Oils Revealed on BBC's Trust Me, I'm a Doctor

Research on 'Healthiest' Cooking Oils Revealed on BBC's Trust Me, I'm a Doctor 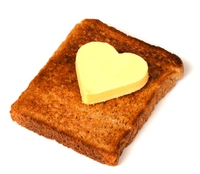 10 Nov 2015 --- Frying with vegetable oils may not be as healthy as many people think, according to research carried out at by experts at De Montfort University Leicester (DMU).

The BBC asked DMU’s Professor Martin Grootveld, professor of bio-analytical chemistry and chemical pathology, to help investigate the “healthiest” oils to cook with for its series Trust Me I’m A Doctor, shown on BBC 2. Volunteers were given sunflower oil, vegetable oil, corn oil, cold-pressed rapeseed oil, olive oil, butter, goose fat and lard and asked to use them in every day cooking. They collected any leftover oil and sent it to DMU’s labs to be analysed.

When fats and oils are heated the molecular structure changes, producing chemicals called aldehydes that may cause heart disease and cancer. Professor Grootveld’s team found sunflower oil and corn oil produced aldehydes at levels 20 times higher than recommended by the World Health Organisation. Olive oil and rapeseed oil produced far fewer aldehydes as did butter and goose fat. Not only that, but Professor Grootveld's team also identified two previously unknown aldehydes in the samples of these oils - a world first.

He said: “Sunflower and corn oil are fine as long as you don't subject them to heat, such as frying or cooking. It's a simple chemical fact that something which is thought to be healthy for us is converted into something that is very unhealthy at standard frying temperatures."He recommends olive oil for frying or cooking: “Firstly, because lower levels of these toxic compounds are generated, and secondly the compounds which are formed are less threatening to the human body.”

Presenter Michael Mosley said: “Put simply, cooking with these oils is producing even more toxic compounds than has ever before been realised. In contrast, the olive oil and cold-pressed rapeseed oil produced far fewer aldehydes, as did butter and goose fat. The reason being that these fats are richer in monounsatured and saturated fats, and are much more stable when heated.

“I was surprised as I'd always thought of sunflower oil as being 'healthy'."Professor Grootveld has been carrying out research in this area for many years and is a respected consultant for a wide variety of healthcare, pharmacy and food companies.

Nutritionists have long been touting the benefits of cooking with saturated fats such as lard, butter and coconut oil rather than cheap vegetable oils, which are often rancid even before cooking begins due to their storage in clear plastic bottles, which allows heat and light to damage the delicate oil.

Gold Coast Ingredients has unveiled a new range of flavor trifectas dubbed Cookies, Cream and Things for a vast range of F&B and nutraceutical applications. The... Read More

Stuck in the past? US dietary guidelines may “lack evidence” for unhealthy saturated fat claims

The Dietary Guidelines for Americans (DGA) recently reconfirmed its recommendation to limit saturated fats to 10% or less of total energy intake, despite external... Read More

New evidence points to a link between eating saturated fat from meat and developing heart disease. A study in more than 100,000 individuals found that consuming 5... Read More