You are in : All News > Plant-based diet boosts insulin and incretin secretion in those with Type 2 diabetes 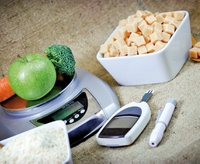 01 Mar 2019 --- A plant-based diet can improve the secretion of insulin and incretin hormones in those with Type 2 diabetes, according to new research published in Nutrients. The findings underline possible health benefits of following a plant-heavy diet and come at a time when interest in plant-based lifestyles is at an all-time high.

Researchers compared the effects of a plant-based meal to a meal containing meat on the hormone levels of a group of 20 men who have Type 2 diabetes in a randomized crossover trial. The meals consisted of either a tofu-based veggie burger or a meat-based burger and contained the same amount of calories and ratio of macronutrients.

The results show that participants’ postprandial secretion of insulin increased more after the plant-based meal than the meat-based meal. Secretion of incretin hormones, particularly glucagon-like-peptide 1 (GLP-1), also increased more after the vegan meal. Incretin hormones amplify the release of insulin after a meal and also help decrease blood glucose levels.

Beta-cell function parameters also improved after the vegan meal. Beta cells synthesize, store and release insulin. Beta-cell function is typically diminished in those who have diabetes and preserving beta cells' capacity to produce insulin is a cornerstone in the treatment of diabetes.

“With diabetes rates rising and insulin costs soaring, this study offers hope that a solution could be close at hand: the food on our plates,” says study author Hana Kahleova, M.D., Ph.D., Director of Clinical Research at the Physicians Committee for Responsible Medicine. “The results add to the evidence that a plant-based diet should be considered a frontline treatment for Type 2 diabetes.”

Currently in the US, more than 114 million adults have either diabetes or prediabetes.

Being environmentally-conscious or having food sensitivities are not the only reasons people are shifting towards vegan, vegetarian and flexitarian diets. More than being just a trend, diets with reduced meat consumption have been touted as having a number of health benefits and boosting wellbeing. These include a reduced risk of heart-related diseases and reduced risk of developing Type 2 diabetes, as well as promoting weight loss.

A previous study found that a 16-week plant-based dietary intervention improves insulin resistance and beta-cell function in overweight adults. Other studies have shown that plant-based diets are effective in managing and even reversing type 2 diabetes and that those following a plant-based diet have approximately half the risk of developing diabetes, compared with meat eaters.

In January, plant-based diets were found to promote beneficial gut hormones that are responsible for regulating blood sugar levels, satiety and weight. The researchers found increased plasma concentrations of the peptide amylin in people who consumed vegan meals, adding to the evidence that “plant-based diets can help manage and prevent Type 2 diabetes and obesity.” In a similar  space, a comparative study by the American Heart Association (AHA) has shown that a vegan diet is more effective in reducing the risk of coronary heart disease than the AHA recommended diet.

17 Jun 2020 --- Two new studies have brought the debate on the health impact of meat consumption to the fore once again. A German study found that the less animal-derived food... Read More