You are in : All News > Folic acid supplementation found to reduce the risk of gestational diabetes 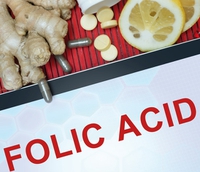 02 May 2019 --- Daily supplementation of folic acid may reduce the risk of gestational or pregnancy-related diabetes, according to a new US National Institutes of Health (NIH) endorsed study. Published in Diabetes Care, the research concluded that consumption of folate-rich foods did not contribute to reducing diabetes risk. Folic acid supplementation, however, lowered the chances of pregnancy-related diabetes by 22 to 30 percent, as it is more easily absorbed by the body than folate – the naturally occurring form of the vitamin.

Gestational diabetes is a result of elevated levels of blood sugar or glucose during pregnancy. This may increase the possibility of a cesarean delivery and blood pressure disorders during pregnancy. It also raises the risk of cardiovascular diseases (CVD) and Type 2 diabetes later in life. For infants, gestational diabetes increases the risk of large birth size and of obesity during both childhood and adulthood.

Folate is naturally found in leafy green vegetables, nuts, peas, beans and other foods. Folic acid is the synthetic form of folate, that is added to processed foods and the common version frequently used in supplements.

Process and findings
The new study analyzed data from approximately 15,000 women who enrolled in the Nurses’ Health Study II, the largest investigations into the risk factors for major chronic diseases in women. The researchers followed more than 20,000 pregnancies, 824 cases of which presented symptoms of gestational diabetes. Compared to women who did not take a folic acid supplement, those who took less than 400 micrograms were 22 percent less likely to develop gestational diabetes. Those who took 600 micrograms were 30 percent less likely to develop the condition.

Click to EnlargeFurthemore, the researchers note that they did not find a lower risk of gestational diabetes, associated with the consumption of foods that contain high amounts of folate. They cited earlier studies, which showed that folic acid, the synthesized version of vitamin B9, was absorbed more easily into the body, compared to folate which is naturally found in foods.

Researchers also noted that previous studies have found that insufficient folate is associated with insulin resistance (difficulty using insulin to lower blood glucose), which may precede the development of Type 2 diabetes in non-pregnant people.

Folic supplementation becomes a policy matter
In response to evidence supporting the critical role of folate in prenatal and natal nutrition, the US Food and Drug Administration (FDA) began fortifying some foods with folic acid from 1998. These include enriched bread, cereals, flours, cornmeal, pasta, rice and other grain products.

According to the US Preventive Services Task Force, all women of reproductive age should take a daily supplement containing 400 to 800 micrograms of folic acid to reduce the risk of conceiving a child with a neural tube defect, a class of birth defects affecting the brain and spinal cord.

In October 2018, a UK proposal was released, suggesting to fortify flour with folic acid. The policy came after ministers backed a plan that medical experts say will reduce the number of babies born in the UK with serious birth neural tube defects (NTD) – a major consequence of folic acid deficiency around the time of conception – UK media outlet The Guardian reported at the time.

15 Sep 2020 --- The adult use of human milk oligosaccharides (HMOs) has the potential to become even bigger than current infant formula usage, according to Odd Hansen,... Read More