You are in : All News > World Obesity Day: Experts flag sweeteners’ role in tackling the global epidemic

04 Mar 2020 --- In light of World Obesity Day, industry experts are underscoring the significant role sweeteners have in tackling the growing epidemic. Globally, governments are making moves to reduce sugar content in foods and beverages, while demands from health-conscious consumers are driving the pervasive sugar-reduction trend. NutritionInsight speaks to specialists who explain how reducing caloric content comes with formulation hurdles, while research linking sweeteners to some health risks is under scrutiny.

“Natural, low-calorie sweeteners, such as stevia, can be 300 times sweeter than sugar and allows consumers to enjoy sweet tasting products with minimal calories,” says Katharina Pueller, Director of Natural Sweetener Business at Sweegen.

“On the market today, there is a considerable number of solutions with little and no added-value, which makes the whole sweeteners business difficult to read. Additionally, sugar reformulation is challenging, because of the multitude of roles sugar plays in a food product. Most companies do not have strong enough NPD teams to overcome these challenges,” notes Primož Artač, CEO of Tosla.

Studies have linked sweeteners to potential negative health outcomes, but an International Sweeteners Association (ISA) spokesperson notes that before being approved for use on the market, all low-/no-calorie sweeteners have been subject to extensive safety assessments. Therefore, their safety has been consistently and repeatedly confirmed by food safety authorities around the world. 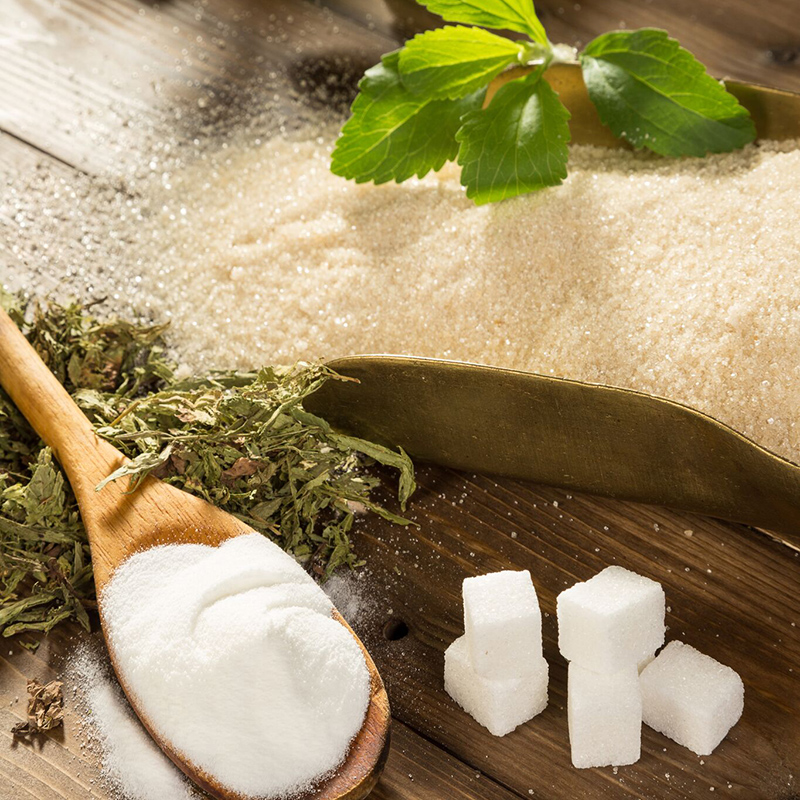 Click to EnlargeStevia is highlighted as a natural low calorie alternative to sugar.Obesity on the rise
ISA joins a slew of global organizations, who in the context of World Obesity Obesity day are responding to the “critical obesity challenge.” The global event seeks to promote informed policies, a healthier food environment, and the right care and education around obesity.

According to the World Health Organization (WHO), obesity rates have nearly tripled since 1975 and have increased almost five times in children and adolescents, affecting people of all ages from all social groups in both developed and developing countries. Obesity is a major risk factor for various noncommunicable diseases (NCDs), such as type 2 diabetes, cardiovascular disease (CVD), hypertension and stroke, and various forms of cancer.

How can sweeteners help?
Sugar reduction is, despite everything, growing as a trend. In an Innova Consumer Lifestyle and Attitudes Survey (2018), nearly seven out of ten consumers across the countries surveyed (US, UK, France, Germany, China and Brazil) reported having reduced their sugar intake. This is particularly prevalent among the over 55 age group, with consumers in France and Brazil the most likely to be reducing sugar in their diet. The consumer survey also found that this trend is most robust in the UK and US, where 57 percent and 52 percent of consumers respectively claim to have cut down on sweet snacks.

Even though low- or no-calorie sweeteners are “no magic bullet,” they can help reduce sugar and calorie content in foods and drinks, providing this way one potential solution against obesity, an ISA spokesperson tells NutritionInsight.

Sweeteners have the benefit of providing sweet taste while contributing very few or no calories at all to the final product. Therefore, low-/no-calorie sweeteners can be a helpful tool in reducing calorie and sugar intake, when used in place of sugar and as part of a balanced diet and a healthy lifestyle, the ISA spokesperson further explains.

“The market should base its conclusions [on sweetener’s nutritional properties] on scientific findings,” Philippe Chouvy, Business Development Manager, Sweeteners at Cargill, tells NutritionInsight.

Previously, a new report publicized by the ISA argued that there is an extensive body of robust scientific evidence that shows that low- and no-calorie sweeteners are safe and can be part of broader strategies to reduce sugar intake. However, experts noted how the microbiome may be a particular potential point of concern.

Stevia in the spotlight
Stevia ranks among the top five high-intensity sweeteners that are tracked in recent F&B product launches. Compared to others, it is the only one that could be sourced from nature. So it has gained popularity in applications, explains Dr. Mel Jackson, CSO of Sweet Green Fields.

“There are a lot of sugar substitutes available to the market, and they compete with each other. However, when it comes to sweeteners that are plant based, non-caloric, FDA GRAS, high intensity, with commercial scale and a sustainable supply, so far, the choices are still just stevia and monk fruit and combinations thereof,” Elaine Yu, President at Layn.

“Stevia and monk fruit are well suited to many applications but beverage, dairy, tabletop and sports nutrition applications are seeing the majority of growth. Trends such as low and mid-calorie, zero or reduced sugar, as well as the rapidly growing ketogenic and plant-based trends, are all popular reasons for increased use of sweeteners like stevia and monk fruit,” concludes Shaun Richmond, Global Vice President of Sweeteners at Layn.

23 Feb 2021 --- The drive toward healthier food choices will remain robust in sweet treats throughout this year, as emphasized in Innova Market Insights’ latest... Read More

10 Feb 2021 --- US-based Evolve BioSystems has landed US$55 million for the commercialization of its “next generation of probiotic.” Called Evivo, the offering is... Read More

29 Jan 2021 --- Israel-based DouxMatok is targeting accelerated growth for its Incredo Sugar – a sugar reduction solution based on real cane sugar – with an upcoming... Read More

20 Jan 2021 --- Swiss biotech company Evolva has launched L-arabinose, a natural sugar blocker used in food and beverages. The company is having commercial discussions with... Read More