You are in : All News > Whole grains: Experts craft global action plan to increase consumption 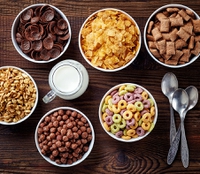 19 Dec 2017 --- New data on the links between diet and health show that replacing refined grains with whole grains globally could reduce the burden of chronic disease more than any other change – including better-known approaches such as reducing sodium, eliminating trans fats or even cutting sugar-sweetened beverages.

This eye-opening data from the Institute for Health Metrics and Evaluation was revealed during the keynote address at the recent Whole Grain Summit in Vienna. In response to the urgent public health challenge documented by experts speaking at this event, more than 200 scientists from 36 countries participating in the Whole Grain Summit worked to craft a two-year global action plan to increase whole grain consumption.

“Worldwide, cereals provide nearly 50% of energy intake,” said Prof Dr. Fred Brouns, Scientific Chair of the Whole Grain Summit. “Yet the vast majority of these foods are composed of refined grains and flours. Research shows that health benefits from whole grains are associated with replacing as little as two servings of refined grain/flour foods with whole grain foods.” More than two decades of studies indicate that consuming whole grain foods, instead of refined grains and foods made from white flour, is directly related to a lower mortality risk and reduced risk of developing type 2 diabetes, cardiovascular diseases and obesity, and bowel cancer.

"The challenge to increase whole grain is particularly high in regions where white flour based products have been consumed for many decades and have become part of the eating culture. Whole grain differs in taste and flavor. Getting used to these sensory attributes at young age is important to create liking of whole grain," he tells NutritionInsight. "That the gap can be cut has been shown in Denmark where multi-stakeholder interactions, including government and cancer society have implemented very strong campaigns to increase whole grain while reducing white bread consumption. To make this happen a governmental endorsed whole grain logo was developed and introduced to the food industry. This has been very successful," he adds.

Academics, non-profit organizations, government policymakers, and industry, working together at the Whole Grain Summit, contributed a dynamic breadth and depth of knowledge to the task of creating a Whole Grain Declaration and long-term action plan.

Key goals and action points will aim to:

1.    Definitions: Reach a consensus on a global whole grain definition, to support clear product labeling that will help consumers distinguish whole grain products from those with misleading claims.
• Convene a global working group including key grain science groups and experts from diverse regions, to finalize a definition of whole grain (raw materials) using the Healthgrain Forum definition as a starting point.
• Follow a similar process for defining a whole grain food, once a global intake recommendation has been agreed.

Six international working groups have already been established to carry out the goals agreed in Vienna. Over the next two years, participants in these groups will work intensively under the name of the “Whole Grain Initiative,”, and will interact with the WHO (World Health Organization), FAO (Food and Agriculture Organization of the United Nations), EFSA (European Food Safety Agency) and other consortia and food authorities as part of the action plan.

The Whole Grain Summit 2017 was organized by ICC (International Association for Cereal Science and Technology) in cooperation with the Healthgrain Forum and the University of Minnesota. Ongoing work of the Whole Grain Initiative will also be organized by the same three partners.

For over three decades, repeated studies have clearly demonstrated that people eating more whole grains have reduced risks of many diseases compared to those eating less. This has led many countries to adopt specific recommendations for people to choose whole grain-based foods instead of refined grain-based foods. Yet current data suggest that whole grain intake in most countries remains well below existing recommended levels, which is a concern for long-term public health.

This declaration reflects the experts’ consensus on the principal goals that must be addressed, and the actions that must be taken in order to increase whole grain intake.

In terms of the industry response, Brouns calls for the development of good tasting recipes that include much larger whole gain fractions than has been the case until now.

"New technologies are applied, in particular using sourdough cultures which last much longer for fermentation but lead to unique whole grain taste and flavors. In addition, new enzyme treatments are being tested. The bakery industry is working hard to upscale these technologies to help produce whole grain foods for better health," he concludes.

25 Jul 2019 --- Refined grains have commonly been pegged as having no significant nutritional value and have been linked to obesity and diabetes. Whole wheat options are the... Read More

11 Apr 2019 --- Contrary to previous research findings, refined grain consumption is not associated with any of the adverse health effects it has been linked to, such as obesity,... Read More

04 Apr 2019 --- One in five deaths – the equivalent of 11 million deaths globally – are associated with poor diet, which also contributes to a range of chronic... Read More

29 Jan 2019 --- The importance of whole grains for a nutritionally balanced diet escapes roughly 90 percent of UK consumers, according to a recent study commissioned by... Read More

09 Oct 2018 --- A high intake of whole grains has been found to increase the levels of betaine compounds in the body which, in turn, is associated with improved glucose metabolism,... Read More