You are in : All News > UK sodium reduction scheme “not fit for purpose” as Action on Salt calls for mandatory measures

15 Mar 2022 --- The voluntary nature of the UK’s salt reduction policy is its “Achilles heel,” argues Action on Salt. In light of Salt Awareness Week, the campaign group is calling for stronger measures to improve the nutritional quality of food, spurred by its latest investigation of salt levels in snacks.

“We need supermarkets and food companies to put our health before their profits and change the food environment so that the healthier choice is the easier choice for all,” Sonia Pombo, campaign manager for Action on Salt, tells NutritionInsight.

She points out that salt reduction has been a feature of UK food policy for two decades and is accepted globally as a cost-effective strategy to improve public health. The UK’s salt reduction model has inspired other countries. At the height of its success, the UK food business had reduced the salt content of foods by 30-50%.

“Under the Food Standards Agency, salt reduction thrived, but a change in parliamentary hands gave the food industry full rein to police themselves. As a result, no significant reductions in population salt intakes have been made since 2011.”

Therefore, Pombo argues that in its current form, the UK salt reduction program is no longer fit for purpose.Salt reduction is the most cost-effective measure for lowering blood pressure, according to Action on Salt’s chairman.

Demands for government action
Action on Salt is calling for mandatory, comprehensive salt reduction targets, which would require all companies to work toward the same standards.

“We’ve seen examples of successful mandatory salt reduction policies around the world, such as South Africa. The same approach should now be set in the UK,” says Pombo.

Action on Salt argues that failure to comply should result in penalties. While Pombo does not specify what might be appropriate, she points to the Soft Drinks Industry Levy (SDIL) as an example of successful mandatory reformulation.

Also at a government level, a successful salt reduction program would include the expansion of advertising and promotion restrictions to include all foods with a salt target.

Furthermore, the group is calling on the government to develop consumer awareness campaigns to inform the public of the dangers of salt hidden within everyday food.

“Companies must be willing to change”
At an industry level, Action on Salt is demanding that companies improve the nutritional offering of their products. “What companies need is a willingness to change and a level playing field,” says Pombo.

She explains that unhealthy food is very cheap and easy to produce. “They are often heavily promoted online and in-store to entice us to buy these cheap and convenient foods on a regular basis. But they are not convenient for our health.”

She continues that when reformulating foods to contain less salt, the process in many cases is simple; gradual reductions in the amount of added salt to food is the preferred approach.

This process of gradual reformulation will mean consumers will unlikely notice the difference and will continue to buy the foods they are accustomed to, which is good news for businesses. 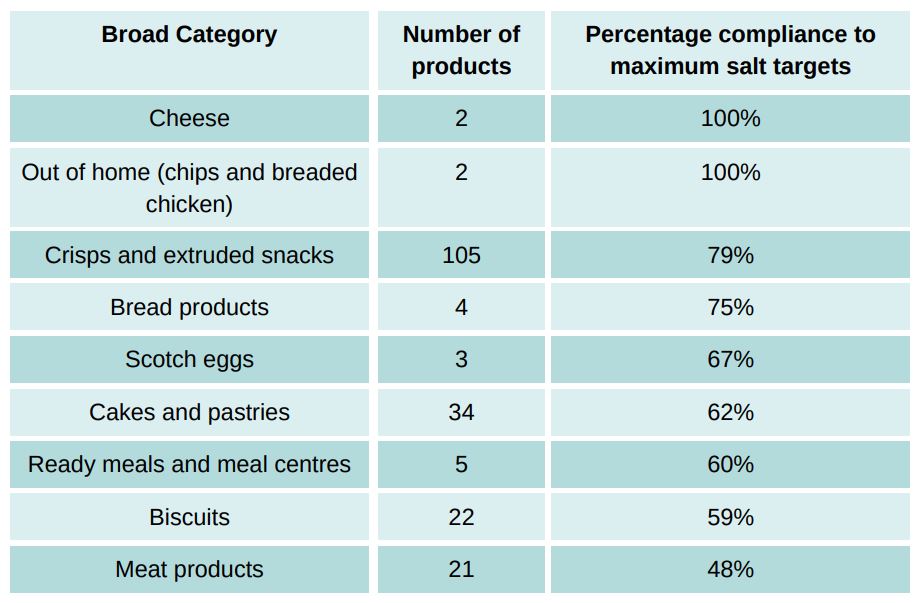 Meat products and cookies were found to be especially likely to not comply with salt targets.

Challenges in reformulation
For a limited number of food categories, such as meat, salt has a structural and safety purpose, and therefore additional measures are needed to reduce salt without compromising on quality, Pombo details.

“In these instances, salt reduction is more challenging, but not impossible. There are many reduced-sodium salt alternatives on the market that work just as effectively as regular salt for this purpose,” she asserts.

For example, Salt of the Earth offers Mediterranean Umami Bold, which boosts savory flavors and reduces sodium up to 45% in a variety of products.

Monosodium glutamate (MSG) is also popular, with Ajinomoto recently delving into the misconceptions around the ingredient.

Meal deals come under fire
Action on Salt’s research has also revealed that 70% of “meal deal” snacks are “dangerously” high in saturated fat, salt and sugar (HFSS) – with some contributing a third of an adult’s maximum daily recommended salt intake.

Meal deal combos usually include a main dish like a sandwich, a snack and a drink at an accessible price point. They are popular on UK high streets, with Action on Salt noting that as people return to workplaces, there will likely be renewed interest in convenient and cheap lunchtime options.

However, it has found that nearly a third (30%) of meal deal snacks exceed their maximum salt target, in particular meat products and cookies.

Despite nearly two-thirds (63%) of snacks having some form of perceived nutrition or health-based message on-pack or in the product description, 70% would score as a HFSS food.

“While these marketing claims are legal, they have been shown to be misleading to consumers by creating a ‘health halo’ and discouraging shoppers from scrutinizing the label more thoroughly,” states Action on Salt.

Other foods that have come under fire from Action on Salt include chilled sliced meats, plant-based meat alternatives and so-called healthy snacks.

Action on Salt and Sugar previously called for the UK government to make front-of-pack nutrition labels mandatory without delay.

Researchers have uncovered that it is possible for hypertension patients to acclimate their taste perceptions to a low sodium diet over time. This is according to a... Read More

Lowering sodium intake in chronic heart failure patients improved swelling, tiredness, coughing, and overall quality of life. However, it did not result in fewer... Read More

If food and restaurant industries had adopted the salt reductions first proposed by the US Food and Drug Administration (FDA) in 2016, up to 265,000 lives could have... Read More

The Chinese government may be able to prevent 250,000 stroke and heart disease events each year by having children teach families healthy eating with AppSalt for... Read More