You are in : All News > UK government must act on “cancer risk” from processed meats, expert group demands 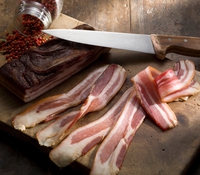 02 Jan 2019 --- The UK government must raise awareness on the carcinogenic dangers of processed meats to the public, as well as support nitrite-free alternatives, UK food scientists, an NHS doctor and several members of parliament have said in a joint statement. Nitrites used to cure bacon and ham create nitrosamines when cooked, which have been proven to be carcinogenic, according to Senior Cardiologist Aseem Malhotra.

The group cites “a growing consensus of scientific opinion” that nitrites in processed meats result in the production of carcinogenic nitrosamines, which are believed to be responsible for bowel cancer.

According to a 2015 report by the World Health Organisation, processed meats are classed as a group one carcinogen, which could cause an additional 34,000 worldwide cancer deaths a year. New analysis suggests this could equate to 6,600 bowel cancer cases in the UK annually.

Click to EnlargeThe expert group says that: “There is a consensus of scientific opinion that nitrites in processed meats result in the production of carcinogenic nitrosamines and therefore increase cancer risk for those who regularly consume traditional bacon and ham.”

“For these reasons, we are concerned that not enough is being done to raise awareness of nitrites in our processed meat and their health risks, in stark contrast to warnings regularly issued regarding sugar and fattening foods,” the group adds.

“A united and active front is needed from policy makers, the food industry and the cancer-care community.”

“We must work together to raise awareness of their risks and encourage the much wider use of nitrite-free alternatives that are safer and can reduce the number of cancer cases,” the group concludes.

Despite the evidence pointing to carcinogens in processed meats, there is little action on the matter and the businesses involved claim that the risk is negligible. Dr. Malhotra says the failure to act on evidence of the harm from nitrites risked comparisons with the tobacco industry‘s past refusal to accept the dangers posed by cigarettes.

“The meat industry must act fast, act now or be condemned to a similar reputational blow to that dealt to tobacco,” Malhotra says. He also rejects the idea that nitrites are essential for meat preservation, pointing to the elimination of the chemicals from Parma ham production and the use of alternative natural processes by producers including Nestlé in France and Finnebrogue in the UK.

Kerry McCarthy, a former Labour party environment spokesperson and member of the group is urging the government to“look closely at what it can be doing to raise awareness of the risks from these chemicals and persuade the food industry to make its bacon and ham safer.”

“These chemicals do not have to be in our food and in years to come I am sure we will look back in disbelief that we allowed their use for so long,” she says.

Additionally, a study from Johns Hopkins Medicine suggests that processed meats may increase the risk of manic episodes. An analysis of more than 1,000 people with and without psychiatric disorders has shown that nitrites – chemicals used to cure meats such as beef jerky, salami, hot dogs and other processed meat snacks – may contribute to mania, an abnormal mood state.

06 Mar 2020 --- While the sports nutrition market has an established history of addressing the physical needs of athletes, companies are now turning toward mental demands. This was... Read More

04 Mar 2020 --- PLT Health Solutions has launched a new formulation of its ingredient Zynamite that has been developed to improve sports performance – in as little as one... Read More

03 Mar 2020 --- High sugar content is the most significant deterrent for people when making healthy food choices – overriding fat and salt, according to a new study published... Read More