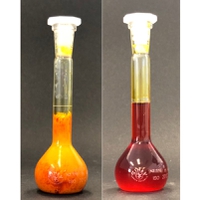 04 Nov 2019 --- Pharmako Biotechnologies’ self-micro-emulsifying drug delivery system (SMEDDS) tripled the absorption of Coenzyme Q10 (CoQ10), which acts as an antioxidant to protect cells from damage and to help metabolism. This is according to a study published in the International Journal of Pharmacokinetics, which also found that the system, dubbed AquaCelle, with CoQ10 was equal or better than that of ubiquinol absorption – an electron-rich form of the coenzyme. The company highlights that these findings allow the product to be used in new formats such as beverages, shots, gels and creams due to the reduced dose in combinational formulations.

“This human pharmacokinetic study adds to the evidence supporting our AquaCelle technology and its ability to increase the bioavailability of lipophilic ingredients,” says Eric Meppem, Co-Founder and Commercial Director at Pharmako Biotechnologies. “By reducing the relevant dose or improving the efficacy of an ingredient through enhanced absorption, AquaCelle provides benefits to consumers and important points of differentiation to brand companies.”

The CoQ10 pharmacokinetics were quantified from blood samples taken at baseline through to 24 hours post-supplementation. Following a single 100 mg dose of CoQ10, the study found that all three AquaCelle combinations had significantly higher absorption when compared to the standard CoQ10 in an oil dispersion.

The patent-pending system is designed specifically to increase the bioavailability of lipophilic actives. The lipid-based formulation self-assembles into a micellar colloidal delivery system in aqueous environments at body temperature, like stomachs. The micelles then envelop fat-soluble ingredients, helping their benefits to be absorbed more fully into the body, the company says. In addition to fat-soluble nutrients like CoQ10, AquaCelle can also be used for omega 3s, lipophilic botanicals such as silymarin, curcumin and grape seed extract, and for fat-soluble vitamins A, D, E and K.

The results also indicated that a combination of CoQ10 and AquaCelle absorbed competitively with the typically superior absorbing ubiquinol at the same 100 mg dose. Because ubiquinol can have manufacturing and stability challenges and is an expensive ingredient, AquaCelle can provide the same functional benefits.

“AquaCelle-Q10 allows brand companies to either reduce the dose and cost of an expensive ingredient or improve the efficacy of Q10,” adds George Kokkinis, Co-Founder and Technical Director at Pharmako Biotechnologies.” “We have more than ten human pharmacokinetic and clinical studies underway that will further explore the new frontier of our delivery technologies and systems.”

A recent Arjuna-endorsed study found that its Indian gooseberry extract alleviates dyslipidemia, a leading contributing risk factor to the development of atherosclerosis. Lipid balance was achieved with no concomitant reduction of plasma CoQ10 levels, a phenomenon typically associated with a number of lipid-lowering drugs.

23 Jun 2021 --- Kaneka Nutrients Europe’s ubiquinol can reduce levels of fatigue and stress. This is according to a study conducted by healthcare research company Expansion... Read More

29 Apr 2021 --- Naturex’s TurmiPure Gold is 24 times more bioavailable than a standard turmeric extract over 24 hours, according to the “most exhaustive comparative... Read More