You are in : All News > Regular Girl synbiotic spotlighted for iron absorption, study finds

05 Jan 2022 --- Combining over-the-counter iron with Regular Girl, a supplement containing Taiyo’s Sunfiber prebiotic fiber, may improve iron uptake with no known side effects in female athletes, according to a US study.

“The results of this pilot study are very exciting but warrant further examination to confirm and expand the findings.  In particular we hope future research confirms these findings while also trying to better understand the mechanism of how Sunfiber and probiotics improve iron absorption and iron status,” Dr. Derek Timm, technical sales director, Taiyo tells NutritionInsight. 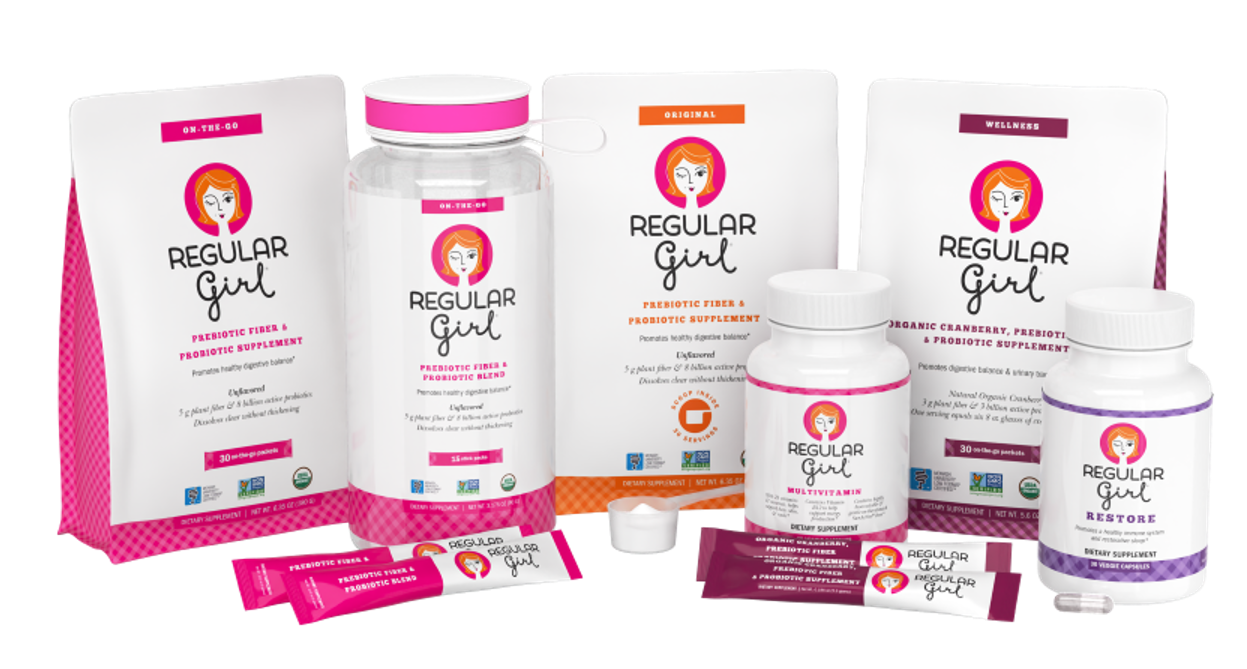 Regular Girl synbiotic prebiotic-probiotic supplement, and the family of products.

A key element of the study was to focus on iron absorption. “Iron deficiency affects approximately 30% of female athletes, affecting their performance. Iron supplements are readily available over the counter but not everyone’s iron absorption is sufficient,” says Taiyo.

Regular Girl has already been spotlighted for urinary tract health and digestive health.

Promising results
As part of the eight-week randomized, double-blind, placebo-controlled study, 20 collegiate female athletes – all of whom were confirmed to be iron depleted – were divided into two groups. One group received Regular Girl (6 g guar fiber and probiotics) and 140 mg of ferrous sulfate, while the other group received 140 mg ferrous sulfate and a placebo.

“This was an amazing response to a low-dose iron supplement,” says Diane DellaValle, King’s College associate professor and research dietitian.

“The exciting thing about this study, even though this was a small sample and we didn’t use elite athletes, is that it demonstrated there are simple ways to improve our uptake of even small amounts of iron.”

“These athletes were in active training during the study, so the ability to improve iron status while training is meaningful. Lastly, iron deficiency anemia can lead to fatigue, so by improving iron status, it may enhance athletic performance along with general wellbeing,” notes Timm.Around 30% of female athletes have iron deficiency.

Increasing iron absorption
Taiyo points out that there are two different types of dietary iron: heme and non-heme. Non-heme iron is found in plant foods such as beans, cereals and vegetables and is the more poorly absorbed of the two. The richest dietary iron source is heme iron found in animal tissue such as meats, which is well-absorbed by the body.

“Non-heme iron is the most abundant source of dietary iron worldwide, so using a synbiotic supplement could aid in ameliorating iron deficiency in women around the globe.”

The findings published in the Journal of Dietary Supplements reveal it may also be beneficial for female athletes to receive dietary counseling on pre- and probiotic food choices and/or synbiotic supplementation to maximize iron bioavailability, highlights DellaValle.

As the industry tries to tackle the challenge of iron absorption, Nestlé Research announced it developed an iron compound that is five times more absorbable in certain situations, compared to traditional stable iron forms, without compromising food quality.

Nestlé Health Science is spotlighting the importance of nutrition for cancer patients, in a new platform launched to provide information and support to... Read More

The wellness market is in the grip of a transformation, with customers seeking better quality products, environmental considerations shaping their decisions and demands... Read More

John Innes Centre researchers are seeking consent to conduct a field trial of genetically modified (GM) wheat based on the TaVIT2 gene, which encodes an iron transporter... Read More