You are in : All News > Sunshine vitamin: Kellogg’s ups vitamin D in cereals to 50 percent of daily need 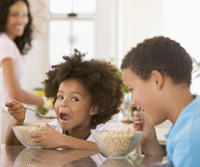 22 Mar 2018 --- Kellogg’s has doubled the amount of vitamin D in many of its cereals to help tackle the chronic low levels of this essential vitamin in UK diets. The company’s cereals are to contain 50 percent of people’s daily vitamin D needs per bowl, the highest fortification level across the cereal category. Kellogg’s will roll out the cereals with 50 percent NRV vitamin D fortification across other European and Middle East markets simultaneously on the same brands as sold in the UK and Ireland, a spokesperson for the company tells NutritionInsight.

Also known as the “sunshine vitamin,” vitamin D is essential for general wellbeing and is known to boost bone health, immune function, mental health as well as gut health. Low vitamin D status has already been associated with the risk of colorectal cancer anClick to Enlarged has been implicated in inflammatory bowel disease.

An estimated one in five people in the UK are deficient in this micronutrient. However, vitamin D inadequacy can be remedied relatively easily with supplements if diagnosed.

According to the UK Department of Health, the Recommended Intake for vitamin D is 5µg which means 2.5µg would be classed as 50 percent of the Nutrient Reference Value (NRV) for this nutrient.

Kellog’s move to up the vitamin D levels in its cereals is the next step in the company’s Better Starts Plan – an initiative unveiled in late 2017 to substantially overhaul its range of cereals to help British families make healthier choices in the morning.

Actions previously announced include a 40 percent reduction in sugar on Coco Pops, delisting high-sugar Ricicles, salt reduction and the introduction of new no added sugar, organic and vegan options.

“We are announcing another important change to our cereals to support people’s health. It’s difficult to get Vitamin D in your diet and our research shows that people aren’t naturally choosing foods which contain this crucial vitamin,” says Laura Street, UK and Ireland Nutrition Manager at Kellogg's.

“That’s why fortification of this vitamin is so important, especially in a food eaten by so many households across the UK. In 2011, Kellogg’s was the first cereal company to fortify its family range with 25 percent of people’s daily Vitamin D needs. But, the problem of deficiency continues so we need to do more.”

Kellogg’s started to voluntarily add vitamins and minerals to foods in 1938 and in the 1970s, the company added folic acid to cereal to help combat neural tube defects in newborn babies.

“Kellogg’s already fortifies many of their products with other nutrients such as 6 B vitamins including folic acid, iron and calcium. We also offer a choice of foods that aren’t fortified and contain naturally occurring nutrients. We are constantly monitoring science and regulations and reviewing or adapting our portfolio accordingly,” a spokesperson for Kellogg’s tells NutritionInsight.