You are in : All News > Soy Germ Isoflavones Found to Be Safe 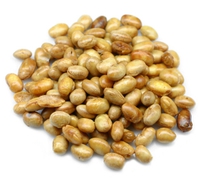 09 Feb 2011 --- Focusing on the effects of soy isoflavones on osteoporosis prevention, the major secondary outcome measured in the OPUS study was safety . No increased risk was observed for breast cancer or endometrial cancer due to supplementation.

2/9/2011 --- The Osteoporosis Prevention Using Soy (OPUS) intervention study, funded by the United States Department of Agriculture (USDA), has confirmed that regular supplementation with soy hypocotyl isoflavones over long periods does not cause adverse effects. It can thus be regarded as safe. These results are especially interesting because they mean that recent discussions about isoflavones promoting different forms of cancer can be considered as baseless.

Focusing on the effects of soy isoflavones on osteoporosis prevention, the major secondary outcome measured in the OPUS study was safety . No increased risk was observed for breast cancer or endometrial cancer due to supplementation. The scientists therefore concluded that long-term supplementation with soy isoflavones is safe.

The OPUS study was a multicenter, randomized, double-blind, placebo-controlled trial following 403 menopausal women for two years. Three different treatment groups were given either 80mg/day, 120mg/day aglycone soy isoflavones or a placebo. The scientists used the patented soy germ isoflavone product SoyLife from Frutarom, and therefore the results can only be considered as valid for this particular composition. As it is derived from soy hypocotyl, it is markedly different to supplements based on soy cotyledons or common OTC isoflavone supplements. Most of the recent studies on safety have involved genistein and soy cotyledon isoflavones, as well as red clover or kudzu isoflavones. SoyLife has a qualitatively different isoflavone composition to these, containing mostly daidzein and glycitein and only a tiny amount of genistein.

At baseline and after one and two years, clinical blood chemistry values were measured, and mammograms and Papanicolaou tests were conducted. In addition, transvaginal ultrasound measurements were taken from a subset of women to assess endometrial status.

After two years, no significant differences in endometrial thickness or fibroids were observed between the groups. Furthermore, isoflavone supplementation did not affect blood lymphocyte, serum free thyroxine, liver enzymes, or other clincial blood chemistries. An investigation of mammographic density, a marker of breast cancer risk, found that two years of supplementation did not adversely modify breast density.

Only two of the 403 women in fact experienced serious adverse events during the study period, one case of breast cancer, another of endometrial cancer – a rate that is statistically lower than the average predicted rate for this group of menopausal women. This allows for the assumption that soy hypocotyl isoflavone supplementation actually might decrease the risk of breast cancer. However, as safety data were secondary outcomes in the OPUS study, this cannot be concluded and further studies are necessary.

In summary, the results of the OPUS study deliver strong scientific evidence that supplementation with SoyLife is safe. Dr. William W. Wong, principal investigator of the OPUS study: “With the potential health benefits of soy isoflavones, the OPUS team is very excited to document that supplementation of up to 120mg per day of aglycone isoflavones for 2 years has no adverse effects.“

This opens up an array of possibilities for manufacturers of nutraceuticals and functional foods promoting bone health. Safety claims can be used without reservation, based on the OPUS results. Therefore, products targeting menopausal symptoms and the prevention of osteoporosis can be developed with SoyLife without fear of being discredited as unsafe. SoyLife is available in concentrations varying from three to 40 per cent isoflavones.

More information on the USDA-funded study can be found on: http://www.bcm.edu/cnrc/soystudy/

There is a “unique” potential to use food supplements instead of drugs to treat heartburn symptoms resulting from food consumption. This is according to... Read More

IFF’s isolated soy protein Supro has been found to have the same effects on muscle gains and strength as whey protein, according to a new study carried out in... Read More

While vitamin D has enjoyed heightened consumer consideration due to its connection with COVID-19, it remains a key strategy to preventing bone health damage, such as... Read More

Women represent a lucrative consumer market beyond the traditional categories of fertility and menopause. However, needs are quickly evolving, so companies must be... Read More