You are in : All News > Sodium guidelines under scrutiny: Only regions consuming over 5g a day should be targeted, concludes study

Sodium guidelines under scrutiny: Only regions consuming over 5g a day should be targeted, concludes study 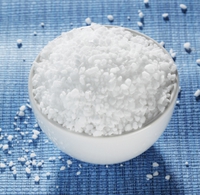 10 Aug 2018 --- A new study shows that for the vast majority of communities, sodium consumption is not associated with an increase in health risks except for those whose average consumption exceeds 5g/day (equivalent to 12.5g of salt, or 2.5 teaspoons). Communities with high average levels of sodium intake (above 5g/day) were mostly seen in China, with only about 15% of communities outside China exceeding this level of consumption.

WHO guidelines recommend a global approach to reducing sodium intake in all populations to below 2g/day, but this has not been achieved in any country. The authors say that sodium reduction strategies should instead target communities with high average levels of sodium consumption (above 5g/day).

The findings come from a new observational study of over 90,000 people in more than 300 communities in 18 countries, published in The Lancet.

“No country has managed to reduce levels of sodium consumption from moderate to very low (below 2g/day), and our study shows we should be far more concerned about targeting communities and countries with high average sodium intake (above 5g/day, such as China) and bringing them down to the moderate range (3 to 5g/day),” says Professor Andrew Mente, Population Health Research Institute (PHRI) of Hamilton Health Sciences and McMaster University (Canada).

Data from the ongoing Prospective Urban Rural Epidemiology (PURE) study was used in the analysis, and 95,767 participants aged 35-70 years in 369 communities in 18 countries were included in the study. A morning fasting midstream urine sample was collected from every participant and was used to estimate 24h urinary sodium and potassium intake. Information about demographic factors, lifestyle, health history, and medication use were recorded and height, weight and blood pressure were measured.

“Very few individuals follow the current recommendations, which call sodium intake of 2,300mg/day, or lower,” Mente tells NutritionInsight. “Our findings and the collective data on over 400,000 people in about a dozen studies show that lowering sodium intake from average levels (3,000-5,000mg/day) down to recommended levels (below 2,300mg/day) would not result in a benefit against cardiovascular disease or mortality, and may even be harmful. On the other hand, communities with very high sodium intake exceeding 5,000mg/day, as found in China, would likely see a benefit to reducing sodium down to moderate levels as found in most other countries.”

“Our study adds to growing evidence to suggest that, at moderate intake, sodium may have a beneficial role in cardiovascular health, but a potentially more harmful role when intake is very high or very low. This is the relationship we would expect for any essential nutrient and health. Our bodies need essential nutrients like sodium, but the question is how much,” he notes.

“The recommendation to lower sodium consumption to 2g/day is based on short-term trials of sodium intake and blood pressure, and the assumption that any approach to reduce blood pressure will necessarily translate into a lower risk of cardiovascular disease with no unintended consequences. While low sodium intake does reduce blood pressure, at very low levels it may also have other effects, including adverse elevations of certain hormones associated with an increase in risk of death and cardiovascular diseases,” adds Mente.

Furthermore, rates of stroke, cardiovascular death, and total mortality decreased with increasing potassium intake in these communities. Diets rich in fruit and vegetables are high in potassium. However, it is not known whether potassium itself is protective, or whether it might simply be a marker of a healthy diet.

In terms of advice/wishes for industry when it comes to sodium reduction, Mente says: “Since most people fall in the ‘sweet spot' of 3,000 to 5,000mg of sodium, it is best that we concentrate on targeting individuals, communities and countries with intakes above this level, rather than a population-wide strategy. Instead, our focus should be to increase intake of foods high in potassium like fruit, vegetables, dairy, nuts, potatoes, and beans.”

In terms of his hopes for the impact that this latest research, Mente says: “It is hoped that we ease up on sodium restriction and instead focus on improving overall diet quality. There is also increasing agreement from both sides of the debate that a large randomized controlled trial of low versus moderate sodium and long-term health outcomes is needed. In the meantime, it’s best to proceed with caution. Public policy can produce great benefit when it is correct, but can also be damaging when it’s incorrect.”

Professor Martin O’Donnell, McMaster University, co-author on the study, adds: “Our findings support other research recommending an all-round healthy diet with an emphasis fruit and vegetables, dairy foods, potatoes, nuts and beans. Very high sodium consumption (above 5g/day) is harmful, but the amount that is consumed by the majority of people does not appear to be linked to an increased risk of cardiovascular disease or death.”

Writing in a linked comment, Franz H Messerli and Louis Hofstetter, University Hospital, Bern (Switzerland) and Sripal Bangalore, New York University School of Medicine (US), note: “A cursory look at 24h urinary sodium excretion in 2010 and the 2012 UN healthy life expectancy at birth in 182 countries, ignoring potential confounders, such as gross domestic product, does not seem to indicate that salt intake, except possibly when very high, curtails lifespan… Before we change recommendations, let us remember, that Mente and colleagues’ findings are observational data in a predominately Asian population, and base 24-hour sodium excretion calculations on overnight fasting urine measurements. It does not necessarily follow that active intervention, such as decreasing salt intake in patients at risk of stroke or increasing salt intake in patients at risk of myocardial infarction, will turn out to be beneficial.”

“Nevertheless, the findings are exceedingly interesting and should be tested in a randomized controlled trial. Indeed, such a trial has been proposed in a closely controlled environment, the federal prison population in the US. The simple fact that a trial looking at salt restriction has to be done in the federal prison population indicates that curtailing salt intake is notoriously difficult. Incentivizing people to enrich their diets with potassium through eating more fruit and vegetables is likely to need less persuasion.”