You are in : All News > Protein popcorn anyone? Breeding scheme and novel CRISPR-Cas9 method could spur high-protein cereals

20 Feb 2019 --- US researchers have successfully increased lysine levels in popcorn and sorghum by adopting different approaches – one being a traditional breeding scheme and the other, an emergent CRISPR-Cas9 method. The key amino acid lysine is typically scarce in many cereal grains and higher levels could, thus, add nutritional and economic value, broadening the appeal of grains. Boosting the protein profile of sorghum, which is a dietary staple in some developing parts of the world, could make the crop a more complete source of nutrition for people and livestock.

“Both projects are now well past the proof of concept stage and breeding is in progress to generate varieties suitable for large scale production,” David Holding, Associate Professor of Agronomy and Horticulture at Nebraska University, tells NutritionInsight. “We are combining our different Quality Protein Popcorn (QPP) inbreds to make high yielding hybrids and testing the best combinations for both kernel quality and agronomic performance.”

Nebraska's David Holding (right) and Leandra Marshall (left) are developing lines of popcorn featuring higher levels of lysine, an amino acid essential to the diets of humans and some livestock. Credit: Craig Chandler. As the research is US-based, the sorghum modification does not fall under the strict regulation of GMO law, as is the case in the EU. Last year, the EU higher court decided that mutagenesis techniques, such as CRISPR-Cas9, do fall within this remit. This means products that undergo such technologies must go through extensive, and prohibitively expensive, food safety and environmental testing. However, in the US, the Department of Agriculture (USDA) announced that CRISPR generated genetic variants are not subject to the same regulatory process as GM traits, giving researchers more freedom in this regard.

“This is because the precisely targeted gene edits are physically separate from the CRISPR-CAS9 transgene. Thus, during the breeding process, the transgene can easily be removed by selection while leaving behind only the target gene edits,” Holding says on the difference between CRISPR gene-editing and GM processes.

Modifier genes that were sourced included lysine and popcorn shape kernels that were vitreous, not opaque, as this fuels the “popping” aspect of the corn.

A large vital concern for the research team was on how to retain this “popping” characteristic in QPM as introducing traits from dent corn to popcorn is challenging because it is difficult to recover adequate popping features.

“It was anticipated that the main challenge in making a QPM version of popcorn was to recover adequate popping ability in the end. QPM is based on the natural opaque-2 genetic variant which in its unmodified form, causes softer, opaque kernels. In its modified form, multiple natural modifier genes have been selected during breeding, and this makes the kernels hard and glassy [which pop] as they are in normal maize.”

Therefore, as opaque popcorn kernels do not pop at all, it was essential for the team to uncover both the opaque-2 gene as well as the modifier genes. This would have to be at the same time as selection for vitreous kernels, popcorn shape kernels and high lysine, Holding explains.

“Thus, this was quite a complicated breeding scheme, but after five years, we have succeeded in recovering multiple QPP lines derived from several different QPM and popcorn parents.” 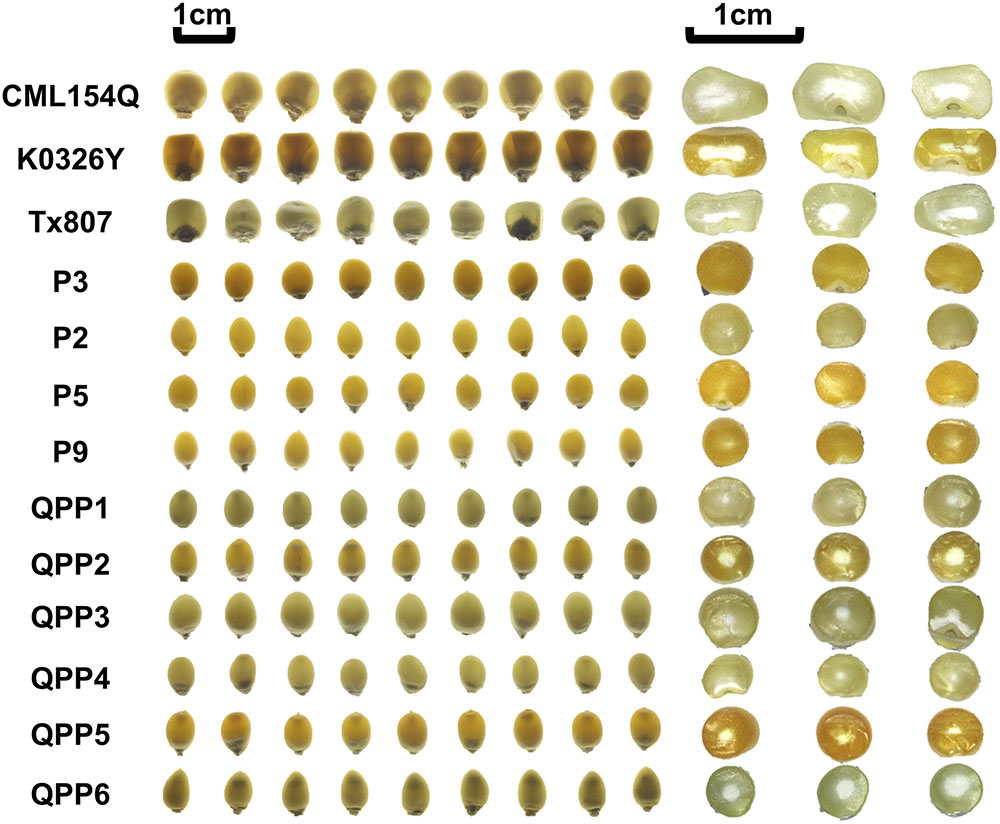 Apart from the nutritional improvement of the grain itself, the research demonstrates the potential to breed other useful traits from dent corn into popcorn and still recover the popping characteristic.

“There has been relatively little success in mining dent corn traits into popcorn before,” notes Holding.

Boosting sorghum
The sorghum project set out to use CRISPR gene editing – which at the start of the program was an emerging technology – to reduce the lysine-devoid prolamin proteins in sorghum and in doing so, increase the content of lysine-containing non-prolamins and increase the protein digestibility of the grain.

“We applied CRISPR-Cas9 in a way that had not been attempted before. We used a single guide ribonucleic acid molecule (RNA) to edit and reduce the expression of the entire prolamin family of about 20 similar genes. The goal was to reduce, but not eliminate, the prolamin proteins so that we would not induce opaque kernels but still see a compensatory increase in lysine-containing proteins,” says Holding.

“This led to an increase in protein digestibility, as expected, which is equally important to the lysine increase since sorghum proteins are quite indigestible in comparison with other cereal proteins.”

The outcomes have “great potential” for increasing the utility of the drought-tolerant sorghum crop for human nutrition, Holding notes. The grain is often cultivated in regions where maize cannot be.

What’s next?
Both the popcorn and the sorghum projects are past the proof of concept stage, meaning that large-scale production can be considered.

The market could soon be seeing cereal grains that pack a high-protein punch, both a winner for mainstream popcorn applications and as a force to alleviate protein deficiencies in the developing world.

Aker BioMarine has received the US Food and Drug Administration’s (FDA) approval for its Qrill Aqua and Qrill High Protein (QHP) salmon feed in North America. As... Read More