You are in : All News > Plant power: Legume protein aids in fight against hunger and global warming 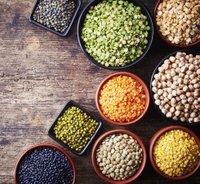 16 Oct 2017 --- An increase in growing and consuming legumes in Europe would contribute to improving worrying problems in the world such as hunger and global warming, according to scientists of the European Research Project “TRansition paths to sUstainable legume-based systems in Europe” (TRUE). The study results draw attention to the link in the food system between better nutrition and a lower agricultural impact on the environment.

Legume protein sources celebrated
Initial results from the European Research Project TRUE, in a study conducted by students Shauna Maguire and Conor O’Brien from Trinity College Dublin, under the supervision of Professor Mike Williams, score dietary protein sources in terms of both their environmental cost of production (greenhouse gas emissions, groundwater pollution and land requirement) and their nutrient content.

“In all cases plant protein sources – in this case, legumes like peas, beans and lentils – show the highest nutrient density and the lowest environmental production costs,” says Professor Mike Williams.

“For example, peas have a nutrient density to environmental footprint ratio approximately five times higher than equivalent amounts of lamb, pork, beef or chicken. In other words, you receive more nutrients per portion of peas at less of an environmental cost,” continues the environmental scientist.

Applying these environmental and nutritional indices to a range of diet scenarios, the Irish researchers have calculated the benefits that occur in terms of reduced greenhouse gas emissions and increased nutrient densities where the proportion of animal protein consumed is reduced.

“Such quantitative estimates of sustainable food and agriculture will hopefully allow a more informed choice for consumers when considering the main protein component of their diet,” says Professor Williams.

“These first results of the TRUE Project are an important orientation for European consumers and decision makers, considering the risks to society emerging from the global increase in animal protein consumption, including growing environmental problems and increased food insecurity due to the competition between food and feed on global fields,” comments Alicia Kolmans from the Research Centre for Global Food Security and Ecosystems at the University of Hohenheim in Germany, responsible for the knowledge exchange and communication part of the TRUE project.

This study is the latest to confirm plant-based protein’s benefits. Recently, research by Quorn Foods has suggested that protein found in Quorn meat-free foods may be just as beneficial for muscles as animal proteins. DuPont Nutrition & Health has extended its range of plant-based, 90 percent protein nuggets, while Kerry launched ProDiem – a complementary combination of plant proteins including pea, rice and oat to improve the protein digestibility-corrected amino acid score (PDCAAS) – at Vitafoods Europe in Geneva.

The latest results showing plant protein’s benefits came out shortly before World Food Day 2017, which is today. This year’s theme is changing the future of migration by investing in food security and social development.

09 Feb 2021 --- A low-fat vegan diet is more effective in producing weight loss than a Mediterranean diet. This is according to a study from the US-based nonprofit Physicians... Read More

21 Jan 2021 --- The Asia-Pacific (APAC) region is not on track to achieve the UN’s 2030 targets of ending hunger. A new report by four specialized UN agencies... Read More

17 Dec 2020 --- UNICEF UK has launched a domestic emergency response to food poverty within the country for the first time in its 70-year history. Children in the Central... Read More