You are in : All News > Obesity worse in men? Sex differences could complicate treatment for weight-related diseases

10 Jan 2023 --- Men are more likely than women to develop conditions associated with obesity, such as cardiovascular disease, insulin resistance and diabetes, according to new research by York University, Canada. While the researchers analyzed the adipose endothelial cells (EC) of mice, the researchers argue that the findings could apply to humans.

“You can’t make the assumption that both sexes are going to respond to the same series of events the same way. This isn’t just an obesity-related issue – I think it’s a much broader conceptual problem that also encompasses healthy aging,” says professor Tara Haas, faculty of health, school of kinesiology and health science at York University.

“One implication of our findings is that there will be situations where the treatment that is ideal for men is not going to be ideal for women and vice versa,” says Haas.

Tissue growth differences prolific
Haas and her team observed in an earlier study that when mice become obese, females grow a lot of new blood vessels to supply the expanding fat tissue with oxygen and nutrients, whereas males grow a lot less.

In this latest study published in iScience, titled “Transcriptomic profiling reveals sex-specific molecular signatures of adipose endothelial cells (EC) under obesogenic conditions,” the researchers focused on differences in the EC that make up the building blocks of these blood vessels in fat tissue. 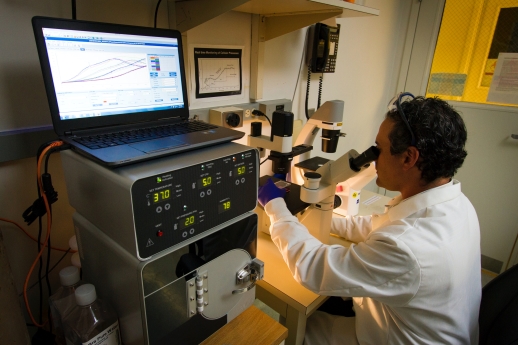 Gene sequencing software was used to evaluate the tissue differences between male and female mice.

“It was very striking the extent of inflammation-associated processes that were prevalent in the males. Other studies have shown that when EC have that kind of inflammatory response, they’re very dysfunctional and don’t respond to stimuli properly,” explains Haas, lead of the study.

Extensive evidence from animal and human studies concur that EC dysfunction and impaired angiogenesis contribute to the development of obesity and its related complications.

Sex is a biological variable that accounts for differences in adipose tissue pathophysiology and clinical manifestations of obesity. However, mechanisms underlying these differences are poorly defined, mainly because sex is frequently overlooked in preclinical studies.

While humans and mice have different genes that may be turned up or down, Haas believes the general findings would likely apply to humans in future research and is interested in studying the same cells in humans.

“Even when we take them out of the body where they don’t have the circulating sex hormones or other kinds of factors, male and female EC still behave very differently from each other,” Haas explains.

Male mice-orientated scientific research
The research sheds light on the biological underpinnings of sex differences in obesity-related diseases. The researchers observed “striking” differences in the cells that build blood vessels in the fatty tissue of male versus female mice.

The study analyzed the transcriptome of adipose tissue EC of male and female in mice to identify molecular signatures that may determine the sex differences in vascular remodeling during HFD-induced expansion of white adipose tissue.The researchers believe their findings can also offer insights into healthy aging.

“People have used rodent models to study obesity and the diseases associated with obesity like diabetes, but they’ve typically always studied male rodents because females are resistant to developing the same kinds of diseases,” says Haas, lead of the study.

“We were interested in exploring that difference because it spoke of something fascinating happening in females that protects them.”

The researchers also examined the behavior of the EC when they were taken out of the body and studied in vitro.

To verify that sex differences in gene expression detected in the RNA-Seq dataset were not limited only to this mouse cohort or strain, the researchers conducted a qPCR analysis (a real-time method) of selected genes utilizing adipose EC isolated from an independent cohort of 7-week high-fat feeding (HFD) males and females.

Body weight gain, fasting glucose, and glucose tolerance tests of the mouse cohort were reported in the findings. Overall, a high level of consistency was observed between gene expression in this independent cohort compared with the RNA-Seq dataset, with 12 of the 14 genes tested displaying the same patterns of gene expression.

“It is exciting to observe the continuing resilience female EC display even when stressed by a long-term high-fat diet. The findings from our study can help researchers to get a better understanding of why obesity manifests differently in men and women,” says Alexandra Pislaru, Ph.D. student, faculty of health and co-author of the study.

A grant funded the study through the Canadian Institutes of Health Research, the Natural Science and Engineering Research Council of Canada and the Faculty of Health at York University.

Meanwhile, researchers from the Osaka Metropolitan University in Japan have investigated what stimulates the brain to cause overeating and discovered a genetic mechanism associated with high-calorie, food-fueled obesity.

In addition, more than half of the EU’s adult population is overweight or obese, according to a World Health Organization study, prompting stronger calls for tougher regulations and better nutrition labeling.