You are in : All News > NP Nutra continues on organic route with new stevia product 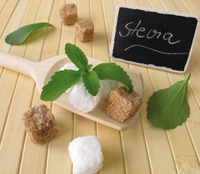 Since its approval by the FDA as a food additive in 2008, Stevia has been used to replace artificial sweeteners in many food and beverage products including those produced by industry giants like PepsiCo, Coca Cola and Hain Celestial Group.

Used for hundreds of years by the Guarani Indians of South America as a food sweetener and weight management aid, Stevia’s popularity is growing at an astounding rate: its worldwide market value has gone from US$336 million in 2014 to a projected US$578 million at the end of this year, the company reports.

Two-hundred to 300 times sweeter than table sugar, Stevia contains phytochemicals quercetin, kaempferol, apigenin and chlorogenic acid that may support a healthy heart and weight. According to the company, NP Nutra’s Stevia P.E. 90% (organic) is certified 100 percent organic and contains no GMO additives or chemicals, making it the ideal choice.

“At NP Nutra we take pride in sourcing and offering our customers only the best quality products. We are very happy to add this premium organic Stevia to our expanding Nutra Organics line of ingredients.” says Thomas Walton, Founder and Chief Executive Officer.

Speaking to NutritionInsight, Margaret Gomes, Director of Marketing at NP Nutra, says, “The ‘healthy living’ trend has had a huge impact on the nutrition industry, particularly in the last decade. The 2013 Global Burden of Disease Study reported that nearly 30 percent of the global population, or an estimated 2.1 billion people, were overweight or obese.”

“Once restricted to a percentage of the population and certain demographic regions, today there is a growing awareness from people of all ages around the world interested in health and who are actively making healthier food choices. Nutritional supplementation works to compensate for inadequate diets and food choices, providing much needed nutrients and promoting immunity, stamina and endurance,” she adds.


For twenty years NP Nutra® has been supplying customers with the finest nutraceutical ingredients produced at our approved partner facilities around the world. Our ongoing commitment to purity, quality and reliability have earned the trust of a growing clientele, including the world's leading functional food and beverage, dietary supplement, cosmetic and pet food manufacturers who have become loyal customers through the years.

“At NP Nutra® we are passionate about health and that is one of the keys to our success. We research, source and supply only the purest, most potent ingredients available on the market, validated through our own Triple-T Verification Program. We care about every aspect of the business, from the workers who help grow the ingredients, the businesses who buy our products, to the consumers who are seeking better health.” —Thomas Walton, Founder Nature's Power Nutraceuticals Corp. (NP Nutra).

Sweetener player GLG to focus on CBD to buffer 2019 losses

04 Mar 2020 --- In light of World Obesity Day, industry experts are underscoring the significant role sweeteners have in tackling the growing epidemic. Globally, governments are... Read More