You are in : All News > Novel seaweed extracts: Cancer-inhibiting properties discovered in fucoidans 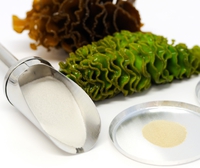 05 Dec 2017 --- Breakthrough research has confirmed that two unique compounds extracted from a specific seaweed have significant cancer-inhibiting properties. A series of animal studies undertaken at McGovern Medical School, University of Texas Health Science Center in Houston (UTHealth) have shown that the two fucoidans reduced tumor growth in select cancers and significantly improved the effectiveness of the common chemotherapy drug tamoxifen.

For centuries, fucoidan-containing seaweeds have been prized for their dietary and therapeutic properties. Their medicinal properties have been particularly well documented in Asian cultures, where seaweeds have been used to address health conditions that range from nausea, congestion and inflammation through to abscesses and tumors. Despite this long history of seaweeds as medicinal agents, it was not until the 20th century that fucoidan was first isolated and recognized for its therapeutic potential.

“Seaweed has been used in Asian markets for centuries for its healing properties, where it is being used in supplements, cosmetics and functional foods. But it is growing quite a lot in America and Europe, especially in supplements and in immune, joint health and anti-cancer applications,” Claire Smoorenburg, Science Communications at fucoidan ingredients supplier Marinova, tells NutritionInsight.

The new cancer-related findings also come at a time when the nutritional potential of seaweed extracts seems to be entering a new phase of recognition. Number 9 on Innova Market Insights’ list of top trends for 2018 is “Ocean Garden,” with the organization explaining that “nutrient-dense vegetables from the sea, like kelp and spirulina, are finding their way into a wider variety of new food and beverage products due to their ability to provide nutritional fortification, act as a natural source of color and deliver unique flavors, especially umami.”

Fucoidan’s potential to complement chemotherapy
The new cancer breakthrough demonstrates the potential for fucoidan to be safely used as a complementary cancer therapy alongside traditional chemotherapy, Marinova reports.

The extracts, developed and manufactured by Marinova, were tested in six human tumor mouse models, including cervical, breast and ovarian cancers. Fucoidan extracts were orally administered to mice for 30 days and compared to controls.

The same breast and ovarian cancer models were also used to assess fucoidan activity in combination with paclitaxel or tamoxifen, two commonly used chemotherapy agents. The results showed that fucoidan considerably improved the efficacy of tamoxifen towards breast cancer. Fucoidan decreased breast cancer tumor growth in this animal model by up to an additional 26 percent when taken alongside tamoxifen.

These findings build on results from a series of in vitro studies performed under the same research program. The in vitro studies showed that the two fucoidan extracts did not interfere with key metabolic pathways necessary for chemotherapy function and directly inhibited a number of human cancer cell lines. Strong synergistic activity between fucoidan and both paclitaxel and tamoxifen was also observed, as well as additive activity with topotecan.

“This was the first research program to comprehensively assess the metabolism of fucoidan compounds for possible chemotherapy drug interactions,” comments Associate Professor Dr. Judith A. Smith, Director of the Women’s Health Integrative Medicine Research Program at UTHealth, who led the research project.

Adding to these findings, a further study in the research program found that both fucoidan extracts enhanced the immune function of cancer-affected mice. Immune markers immunoglobulin G (IgG) and interleukin 6 (IL-6) were both significantly modulated in fucoidan-fed mice, with a 500 percent increase in IgG levels relative to controls after one week.

IgG is the main type of antibody found in humans. It helps control infections by binding to pathogens (such as bacteria and viruses) and alerting circulating immune cells. IgG levels are often suppressed in oncology patients, making them vulnerable to a wide range of infections.

“These results confirm the potential for fucoidan to help restore functional immunity in cancer patients,” comments Dr. Helen Fitton, Chief Scientist at Marinova, highlighting the importance of these findings. “To have identified a safe, natural compound that has such a significant effect on immunity in an oncology setting is really quite remarkable.”

The two clinical studies have been published in the journal Integrative Cancer Therapies: “Evaluation Fucoidan Extracts From Undaria pinnatifida and Fucus vesiculosus in Combination With Anticancer Drugs in Human Cancer Orthotopic Mouse Models” and “Pre-clinical evaluation of safety of fucoidan from Undaria pinnatifida and Fucus vesiculosus for use by oncology patients.”

Marinova continues to back up its products’ benefits, as its Maritech fucoidan extracts recently attained GRAS (Generally Recognized As Safe) status. Australian researchers have also worked with Marinova on using seaweed to heal brain injuries NutritionInsight caught up with Smoorenburg at VitaFoods Asia 2017, where she mentioned the then-ongoing chemotherapy research along with other topics. “I think it has a lot of potential in pharmaceuticals, as well as medical devices, which are on the rise in Europe,” Smoorenburg added of fucoidan.

06 Feb 2020 --- Coming on the heels of World Cancer Day, a collaboration including over 1,300 scientists and clinicians from 37 countries has uncovered an... Read More

04 Feb 2020 --- Eating two servings of red meat, processed meat or poultry – but not fish – per week is linked to a 3 to 7 percent higher risk of cardiovascular disease... Read More