You are in : All News > New Study Highlights Benefits of Consuming Nuts 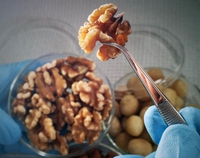 07 Feb 2017 --- A new study has shown how nuts have a positive effect on health because, among other things, they are involved in activating the body's own defenses for detoxifying reactive oxygen species.

“For a long time now we have known that nuts are full of substances that are good for the heart and the cardiovascular system, or that protect against becoming overweight or developing diabetes,” says Dr Wiebke Schlörmann from the Department of Nutritional Toxicology at the University of Jena.

Some studies have also indicated a protective effect against colon cancer, she adds.

“What we have not known in detail up to now is what this protective effect of nuts is based on.”

Dr Schlörmann and her colleagues are now in a position to give specific answers to that question.

In a publication in the specialist journal Molecular Carcinogenesis, they present results from a recent study, which throw light on the molecular mechanisms of this protective effect.

According to this study, nuts have a positive effect on health because, among other things, they are involved in activating the body's own defenses for detoxifying reactive oxygen species.

Such substances, which are created by ultraviolet radiation, various chemicals or distinct food metabolites, for example, can cause DNA damage that leads to cancer development.

The nutritionists in Jena have now shown that nuts and the substances they contain stimulate these mechanisms.

The researchers investigated the effect of five different types of nuts: macadamia nuts, hazelnuts and walnuts, as well as almonds and pistachios.

The nuts were artificially 'digested' in test tubes and the effects of the resulting digestion products on cell lines were then analyzed.

The researchers established that the activity of the protective enzymes catalase and superoxide dismutase increases in the cells that are treated. In addition, the digestion products induce what is called programmed cell death in the cancer cells thus treated.

“We were able to show this effect is mediated by all the types of nuts studied,” noted Prof. Michael Glei, who led the study.

In the next stage, he and his team want to find out whether this protective effect is reduced by roasting the nuts. As most of the nuts investigated are predominantly consumed in roasted form, this further research might enable scientists to give appropriate nutritional advice based on the results.