You are in : All News > Naturex’s TurmiPure Gold turmeric extract marketed as the bioavailability “gold standard” after clinical trial 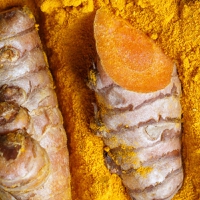 29 Apr 2021 --- Naturex’s TurmiPure Gold is 24 times more bioavailable than a standard turmeric extract over 24 hours, according to the “most exhaustive comparative trial to date.”

Now published in the Journal of Nutrition, the study compares the pharmacokinetics of TurmiPure Gold against four other turmeric formulations, including a standard extract.

Naturex, a subsidiary of Givaudan, describes the results as a “new gold standard” in comparative clinical pharmacokinetic studies, demonstrating that the bioavailability of curcuminoids is impacted significantly by the different delivery technologies used to formulate the turmeric ingredients.

“While other studies have shown that curcuminoid relative bioavailability is dose dependent, this study looked at commercial formulations at their recommended usage levels,” Pascale Fança-Berthon, category technical leader for health at Givaudan, tells NutritionInsight.

“Based on bioavailability, curcuminoid absorption is important because it determines the final amount of the compound that is delivered in the bloodstream. This research highlights the need to consider not only unconjugated curcumin, but also a wider range of metabolites to assess the bioavailability of curcuminoids.”

Eleven blood samples were obtained over 24 hours and plasma was extracted with or without deconjugation with β-glucuronidase or sulfatase. Ultra-high-pressure liquid chromatography/tandem MS was then used to quantify the three parent curcuminoids and 12 metabolites. Classical pharmacokinetics parameters were then derived.

The findings show TurmiPure Gold delivered significantly more curcuminoids in blood than a higher dose of any of the other four formulas tested, demonstrating bioequivalence at a low dose.

Across the 24-hour study period, a small dose of TurmiPure Gold (300mg) was shown to deliver as many curcuminoids to the blood as 1,920 mg of standard turmeric extract or 2,260 mg of a piperine-curcuminoid blend.

This equates to 24 times the bioavailability of standard turmeric extract, 22 times the piperine-curcuminoid combination, and six times the phytosome formulation.

Bioavailability is defined by the percentage of a nutrient that is absorbed into the circulating bloodstream after consumption and is able to offer a functional benefit in the body.

Turmeric is a textbook example of an ingredient with poor bioavailability. Naturex developed TurmiPure Gold specifically to avoid the issues of consumers needing to consume large amounts of turmeric to reap its benefits.

Turmeric extract has been proven to provide substantial neuroprotective benefits for healthy aging and can improve spatial learning and memory, according to recent studies.

The US Food and Drug Administration (FDA)’s voluntary sodium reduction targets are moving the onus from consumers to food suppliers. This is according to industry... Read More

Flavor and fragrance titan Givaudan has unveiled an ashwagandha infusion, tapping into the COVID-19-induced megatrend for mood-enhancing F&B products. The liquid... Read More

India-based Nutriventia is highlighting that 250 mg of its TurmXTRA 60N product could be equal in benefits to 1575 mg of turmeric extract containing 95% curcuminoids, as... Read More

OmniActive Health Technologies is addressing “multiple gaps” in the curcumin market with the launch of Curcuwin Ultra+, which has been shown to be 144 times... Read More