You are in : All News > Misleading honey claims? “Healthier” syrups marketing slammed over sugar content

The consumer group Action on Sugar is calling for mandatory front-of-pack labeling, clearly outlining the levels of free sugars and their contribution to maximum sugar intake

03 May 2019 --- UK lobby group Action on Sugar is maintaining its campaign against saccharides in a newly issued report, which states that consumers are “mislead on honey and so-called ‘healthier’ syrups, despite them being officially categorized the same way as table sugar.” Contrary to this statement, however, health experts have claimed an oppositional stance to the “demonization” of sugar.

In light of the paper, Action on Sugar is calling for the Secretary of State for Health, Matt Hancock MP, to mandate clearer labelling in his upcoming green paper on prevention, and for Public Health England (PHE) to create wider education for consumers via its nationwide Change4Life program about other sugar variants such as honey and syrups added to products and their contribution to maximum sugar intake (30g/day max per adult or approx. 7 teaspoons).

The debate around sugar content and reformulation continues, spurred by the outspread reduction of sugar intake among health-conscious consumers. In an Innova Consumer Lifestyle and Attitudes Survey (2018), nearly 7 out of 10 consumers across the countries surveyed (US, UK, France, Germany, China and Brazil) say they have reduced their sugar intake. This is particularly so among the over 55 age group, with consumers in France and Brazil the most likely to be reducing sugar in their diet.

Action on Sugar decries health halo marketing of popular syrups
The Action on Sugar opinion paper references a study conducted by researchers at Queen Mary University of London, England, who analyzed a total of 223 honeys, sugars and syrups – all widely available in UK supermarkets. The study concludes that honey can be “up to 86 percent free sugars,” while maple syrup “can be made of 88 percent free sugars.”

“Despite the fact that the official definition of free sugars puts honey and syrups in the same category as table sugar, consumers are still being misled through claims on packaging that imply honey and other types of free sugars are healthier alternatives to table sugar,” the report asserts. 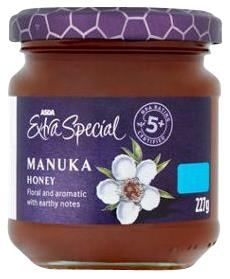 Action on Sugar names two major syrup brands – Morrisons The Best 100% Pure Canadian Maple Syrup and Asda Extra Special Manuka Honey – in the report, saying that each contains sugar levels comparable to table sugar. Additionally, the group singles out other prominent suppliers food and beverage suppliers in opposition of the marketed health benefits of honey used in their products. These named companies were unavailable for comment at the time of publication.

There are no approved health and nutrition claims for honey, besides its efficacy in helping to alleviate acute symptoms of coughing, says Action on Sugar. The group stresses that in these guidelines, honey is still a sugar and can contribute to tooth decay.

Justified claims or “diet-centric” thinking?
Edward Archer, Ph.D., Physiologist and Nutrition Scientist, who published In Defense of Sugar: A Critique of Diet-Centrism, digresses from the “demonization” of saccharides by Action on Sugar. He argues that 40 percent of the calories in both breast milk and infant formula are dietary sugars. Thus, since the evolutionary dawn of our species, humans began life-consuming sugar-sweetened beverages. As such, Action on Sugar’s message is nothing more than “diet-centric disease-mongering engendered by physiologic illiteracy,” he further contends.

In a previous interview with NutritionInsight, Dr. Archer coined the term “diet-centrism” to denote a trend spanning the last 50 years in which researchers, clinicians, health organizations and lobby groups have waged war on sugar, along with other dietary factors. Diet is a trivial factor in metabolic health, positions Archer. Instead, a lack of physical activity is the most important factor for metabolic health.

Earlier last February, Aisling Pigott, Dietician at the British Dietetic Association (BDA) weighed in on the ostracization of certain “unhealthy” foods. “We are keen on demonizing foods,” she tells NutritionInsight. “‘Cut down,’ ‘cut out’ and ‘avoid’ are in consumer’s vocabulary when referring to food. The point is, food is valuable and essential. We don’t need to avoid anything, but we do need to fuel accordingly.”

Nuances in “No added sugar”
The debate around the healthier marketing of alternative sugar sources is intensifying. In December 2018, seven manufacturers and retailers were tasked with removing “no added sugar” claims from several of their products sold in the Netherlands. The Dutch Advertising Authority (RCC) reviewed complaints filed by industry watchdog Foodwatch and has ruled certain “no added sugar” claims to be false. The products in question contain sweeteners like date paste, apple juice concentrate and sugar beet syrup, which Foodwatch deems to be “as harmful as sugar.”