You are in : All News > Mediterranean diet: Protective benefits found against prostate cancer and frailty 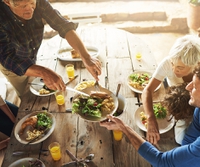 11 Jan 2018 --- Helping to prevent aggressive prostate cancer and frailty in the elderly are to be listed among the benefits of following a Mediterranean diet, according to a number of published studies this week. In a study in The Journal of Urology, researchers have determined that men who followed this diet had lower risk of aggressive prostate cancer than those who followed other common dietary patterns, while in a separate study, analysis of published studies showed that following the Mediterranean diet may reduce the risk of frailty in older individuals, helping keep people healthy and independent as they age.

The Mediterranean diet – rich in fish, boiled potatoes, whole fruits, vegetables, legumes, nuts and olive oil – has been gaining popularity among consumers and dieticians over the past year. Moreover, it was ranked “best overall” diet by US News and World Report, among nearly 40 it reviewed, sharing the top spot on the list with the National Institutes of Health-developed DASH diet.

Prostate cancer
Although prostate cancer (PC) is the most common type of cancer in men and can have a high mortality rate, evidence linking PC to specific environmental, occupational, or dietary exposures has been limited. Recent studies have investigated whether certain dietary patterns impact cancer risks, but the results have been inconsistent.

“This study adds important evidence to the scarce information regarding the association of diet with PC, and highlights the relevance of focusing on global dietary patterns,” explains Beatriz Perez-Gomez, PhD, Cancer and Environmental Epidemiology Unit, National Center for Epidemiology, Instituto de Salud Carlos III (Madrid). “Our results show that a diet oriented towards the prevention of aggressive tumors in the prostate should probably include important elements of the Mediterranean diet such as fish, legumes, and olive oil, and suggest that a high intake of fruits, vegetables, and whole grains might not be enough.”

The authors explored the relationship between the risk of having PC and dietary patterns as part of the MCC-Spain study, a Spanish case-control study that involved 733 patients with histologically confirmed PC and 1,229 healthy men with a mean age of 66 years from seven Spanish regions. Anthropometric, epidemiologic, and dietary data were collected. Their research focused on three dietary patterns: Western, Prudent, and Mediterranean, which characterize the dietary habits of the Spanish population. Only a high adherence to Mediterranean dietary pattern appeared to be associated with a lower risk of aggressive PC, while Prudent and Mediterranean dietary patterns showed different effects in low and high grade tumors.

PC was assessed using Gleason scores of tumor aggressiveness (<6 or ≥6) and clinical stage (cT1b to cT4). A Gleason score of <6 typically indicates a less aggressive tumor with generally good prognosis. Lower clinical stage (cT1-cT2a) indicates a tumor that has not spread. Results indicated that for more aggressive and more extensive tumors (Gleason >6 and stages cT2b to cT4), only high adherence to the Mediterranean diet showed a statistically significant protective effect. All other dietary patterns and tumor characteristics showed little or no correlation and did not achieve statistical significance.

Frailty among the elderly
Frailty is common among older people and its prevalence is increasing as the population ages. Frail older adults may often feel low in energy and have weight loss and weak muscle strength. They are more likely to suffer from numerous health concerns, including falls, fractures, hospitalization, nursing home placement, disability, dementia and premature death.

Nutrition is thought to play a crucial role in developing frailty, which prompted a team led by Kate Walters, PhD and Gotaro Kojima, MD, of University College London, in the UK, to investigate if following a healthy diet might decrease one's risk of frailty.

The researchers analyzed evidence from all published studies examining associations between adherence to a Mediterranean diet and development of frailty in older individuals. Their analysis included 5789 people in four studies in France, Spain, Italy and China.

“While the studies we included adjusted for many of the major factors that could be associated – for example, their age, gender, social class, smoking, alcohol, how much they exercised, and how many health conditions they had – there may be other factors that were not measured and we could not account for,” says Dr. Walters.