You are in : All News > Liquid Core unveils highly caffeinated performance gum with increased bioavailability 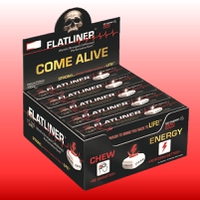 28 Feb 2022 --- US-based Liquid Core Gum Company has rolled out its latest functional gum to enhance performance before and during activities requiring focus and energy. The company highlights that its chewable and liquid delivery system provides a host of benefits from increased bioavailability to personalization.

FlatLiner gum is positioned as the world’s most potent caffeinated gum, delivering 130 mg of natural caffeine via its liquid center – compared to the 100 mg standard for caffeinated gums. It is also sugar-free and sweetened with xylitol to promote oral health.

“All eyes are on the functional gum segment,” says Liquid Core founder and CEO Troy Widgery.

“It reminds us of when Red Bull, Rockstar and Monster changed the course of carbonated soft drinks. One subcategory redefined a larger category.”

Similarly, FlatLiner has all the elements to “wake up” consumers to the performance benefits of chewing functional gum, he underscores.

Perfecting the delivery
FlatLiner’s ingredient delivery technology can diminish the “First Pass Effect,” a pharmacology term that describes how bioavailability can be reduced and delayed by digestion and liver function, explains Liquid Core’s COO Scott Schaible.

The First Pass Effect happens when an active ingredient is absorbed into the gastrointestinal tract and transported via the portal vein to the liver, where it is metabolized. This leaves only a small portion of the active ingredient in the bloodstream, according to the company.

FlatLiner’s Ice Cherry Flavor was designed to transform over time to encourage a longer chewing duration.Gnaw on this
Liquid Core states a number of studies have revealed that the act of chewing itself can have brain-boosting and stress-reducing cognitive benefits, like enhanced memory recall.

However, traditional pressed or chiclet gums are less ideal for ingredient delivery since as much as 18% of caffeine never gets released from the gum, Liquid Core says.

“Studies show that [functional gum] benefits are present for the duration the gum is chewed – which is why the form and flavor of FlatLiner were engineered to last longer and taste better.”

The offering begins with an Ice Cherry flavor, which arcs through “the ultimate flavor transformation,” delivering a series of varied flavors.

This dynamic interaction among the functional ingredients and flavors is one of Liquid Core Gum Company’s unique selling points, it states.

Energy boosts on the move
FlatLiner is marketed toward anyone that needs peak performance with portability and convenience. The offering is “fast-acting and non-jittery,” making it suitable pre-workout. It is also positioned for gamers, truckers, college students, runners, bikers and climbers.

“Isolating the caffeine in the liquid center provides the ability to customize any dose by simply squeezing a portion of the liquid from a piece.”

Planned category expansion
Liquid Core Gum Company currently manufactures its functional chewing gums in the US. The company is also developing a European factory and distribution center in Portugal to service its expanding European Partner Network that includes Sweden, Norway, Germany and partner brand First in the Netherlands.

Bees may be at risk of exposure to glyphosate – an active ingredient most commonly used in weed killers from the EU – via contaminated wildflower nectar.... Read More

Nactis Flavours, part of Nactarome Group, and Trablit-ISDA are forming a partnership to strengthen their shared space within the sweet market. The collaboration will... Read More