You are in : All News > Iron supplements found to have long-term behavioral benefits for low birthweight babies 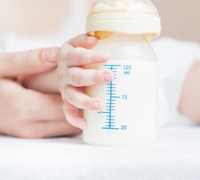 28 Sep 2017 --- Babies classified as low birthweight (under 2,500 grams) are at risk of iron deficiency, which is linked to impaired neurological development. A long-term randomized study has now shown that providing such babies with iron supplements can prevent behavioral problems, lowering levels of aggression and rule-breaking behavior at school age.

The findings are part of ongoing Swedish research involving 285 late preterm and term infants who weighed between 2,000 grams and 2,500 grams at birth, and were defined as being marginally low birthweight. This group represents a significant number of all births. The babies were randomly selected to receive either no iron supplements, or specific doses from the age of six weeks to six months.

Research up until now has shown that those babies given iron supplements had a lower risk of suffering from iron deficiency or iron deficiency anemia by the time they were six months old. When the participants were tested again when they were 3-and-a-half years old, the ones in the supplement group had fewer behavioral problems than those who went without extra iron.

In this study, 207 of the participants from the initial investigation were tested at the age of seven.

Although no major differences were found in the intelligence scores of the children in the two test groups, the magnitude of the intervention group to show externalizing problems was significantly reduced compared to that of the children in the other. They had lower levels of aggressive and rule-breaking behavior and did not suffer as many thought problems.

The thought problems in question were recently shown to be the best independent predictor of autism spectrum disorders. This suggests that the behavioral and emotional profiles of low birth weight children who did not receive iron supplements include different symptoms of subclinical neurodevelopmental problems.

On the population level, this finding is important, since marginally low birth weight infants represent a relatively large proportion of all births. Up to five percent of infants born in high-income countries and fifteen percent of those in low-income countries are defined as such.

The study is published in the journal Pediatric Research.

Levagen+ is a potential sleeping aid capable of reducing sleep onset time and improving cognition upon waking. Levagen+ is a palmitoylethanolamide (PEA) powder, which... Read More